The many reasons not to buy E15 gasoline 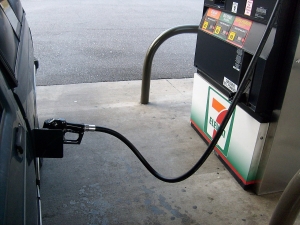 The other day I found myself very confused by two signs advertising gasoline prices at two gas stations directly across the street from each other. I was confused because one sign advertised unleaded gasoline at $2.17 and the other at $2.27. Why one gas station would be cheaper than the other I didn’t know, but I obviously went with the gas station advertising the cheapest price for gasoline.

I was even more confused to find five different options for unleaded gasoline. While I was familiar with E85 gasoline, I had no idea E15 gasoline existed. I did a quick Google search to determine whether E15 gasoline would be good for my car, and multiple sources revealed that as long as my car was newer than 2001 I’d be alright. I should have done more digging.

I’m not even through half my fuel tank and my fuel economy is two miles per gallon less than what I get with 87-octane gasoline. Doing the math, while I save $1.80 filling an entire tank with E15 gasoline, I lose 36 miles in range and roughly $3.25 due to that drop in fuel economy, resulting in a $2.45 net loss. So that warm feeling I got purchasing cheap gas is now cold as ice. I actually got robbed at the pump by subsidized corn growers.

If you’re like me and don’t own a flex fuel vehicle, don’t buy E15 gasoline. It’s that simple. The price of E15 gasoline would have to drop at least 18 cents below the price per gallon for 87-octane gasoline in order for E15 to be cheaper for me. This price point will, of course, depend on the difference in fuel economy you receive when switching to E15 gasoline.

It’s no surprise that Exxon Mobil is doing what it can to make sure E15 gasoline doesn’t take off. It pulled this graph from a blog page that no longer exists, but now that I’ve crunched the numbers, it’s a pretty good recommendation. Unless you drive a flex fuel vehicle or something made in the last couple of years, don’t buy E15 gasoline.

There’s plenty of other reasons not to buy E15 gasoline according to this report published by the Yale School of Forestry and Environmental Studies. Not only is it bad for the environment (“cellulosic and corn-based ethanol (E85) were ranked last of nine technologies with respect to climate, air pollution, land use, wildlife damage, and chemical waste”) and less efficient, it makes your engine run hotter, so if you have a high-mileage engine and are worried about extending the life of your engine, don’t use E15 gasoline.

States are even banning E15 altogether, and multiple bills have been introduced to limit the spread of E15 gasoline. One bill would eliminate the Renewable Fuel Standards entirely, which would probably please the Republican-led Congress and Environmental Protection Agency head Scott Pruitt, who has blasted ethanol in the past and whose ties to the oil industry are well-publicized. Another bipartisan effort, obviously sponsored by legislators from corn-growing states Nebraska and Iowa, would expand E15 gasoline availability by allowing it to be sold year-round. E15 gasoline is currently not available during summer months because of that overheating issue I mentioned.

Four of the five bills introduced and listed below would be bad for E15, ethanol producers and corn growers. If that's any indication of the short-term future for ethanol during the Trump administration, it doesn't look good.

There’s still money to be made on ethanol exports, though, as Mexico has approved ethanol in small doses. The ethanol industry outlook for 2017 is mostly optimistic, but that’s because it’s written by ethanol producers. Dipping ethanol stocks are indicative of ethanol’s uncertain future, but gas station owners seem to think E15 will take off in 2017.

The fact remains: E15 gasoline just isn’t any good if you don’t drive a flex fuel vehicle. If it's not too hot out, though, and you can find E15 for 20 cents less than 87-octane, go for it. But never put it in a boat engine or lawn mower. And don’t say I didn’t warn you.