United Airlines and “The Volunteering!” 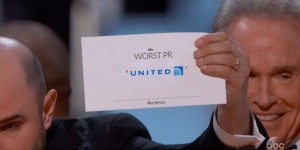 Much has been written about the man forcibly removed from the United Airlines Flight #3411 but for those that missed it, a quick recap:

Audra D. Bridges, a passenger on flight 3411, captured video of a man being forcibly ejected from the plane. Security violently yank him from his seat, smash his face into an arm bar and drag him off the plane. Bridges posted the video on Facebook with, “Please share this video. We are on this flight. United overbooked the flight. They randomly selected people to kick off, so their standby crew could have a seat. This man is a doctor and has to be at the hospital in the morning. He did not want to get off. We are all shaky and so disgusted. #unitedairwaves.” Overnight the video went viral.

It is a fact universally acknowledged, that Dr. David Dao, the man forcibly ejected, is not a criminal. He committed no crime on board the plane. He was not even doing anything particularly wrong. He wasn't even doing anything obnoxious; like reclining his chair too far back encroaching on the personal space of the passenger behind him! It had nothing to do with what he did.  No, it was what he didn’t do that was the problem. He didn’t acquiesce when asked to submit to, “The Volunteering!” He didn’t jump high enough. He didn’t jump fast enough. And if there is one thing the AUTHORITY hates, it’s when people don’t instantly, and blindly, obey.

When Dr. Dao didn’t comply with “The Volunteering!” the folks at United “had no choice” but to call the cops. Chicago PD was quick to the scene and with assistance from airport security officers, snatch dangerous Dr. Dao from his seat and give him what for!

United Airlines quickly throws gallons of gasoline on the fire when CEO Oscar Munoz Tweets a tone deaf response: “This is an upsetting event to all of us here at United. I apologize for having to re-accommodate these customers. Our team is moving with a sense of urgency to work with the authorities and conduct our own detailed review of what happened. We are also reaching out to this passenger to talk directly to him and further address and resolve this situation.”

Late night comedians have a field day with the corporate goon phrase, “re-accommodate these customers.” The negative press coverage and social media hatestorm cause shares in United Continental Holdings Inc to fall approximately 2.5 percent (about a $500 million loss to its market cap).

Munoz, eventually, goes on TV and offers a more legitimate apology but his sympathy is clearly, a day late and a dollar short.

Do you think there will be a lawsuit? Or a made for TV movie? And will you be able to slip in a Scooby Doo reference?

There already is a lawsuit. And United will settle for an obscene amount of money. Other repercussions trickle in:

At this point, if United had really wanted to make room for their crew, they could have offered every single passenger on board fifty thousand dollars and still come out far ahead of the deal than where they are at now.

Though, to be honest, things like this happen all the time. All airlines overbook flights and sometimes a carrier will have to shuffle crew around. Which, in turn, means that sometimes paying passengers will get bumped from flights. Obviously, how you deal with the scenario is the question.

I was bumped from a flight once. About fifteen years ago I was flying out of JFK NY to MPLS and, while awaiting departure, the call came over the speaker asking for volunteers to take a next morning flight. I leapt out of my seat, “Me! Me! That’s me! This guy! Right here! I will! I’ll take that free extra night in NYC! Thank you very much Mr. AUTHORITY!” Wasn’t so bad, actually. Free hotel, free dinner, extra night in the Big Apple. But I’m a white guy who wanted to stay. I didn’t need privilege to help me out, I was all for it.

Dr. Dao didn’t want to stay. He didn’t want to participate in the “The Volunteering!” He resisted. And I don’t mean he physically resisted, because he did not, I mean he resisted the order to comply with the AUTHORITY. And United Airlines severely punished him for his resistance. And then they thought they could get away with it. And they would have gotten away with it too if it hadn’t been for those meddling kids with their pesky cell phone cameras and that social media thing!

As for a, “made for TV movie?” Only time will tell. But just in case a network executive is reading, I will totally write and direct that movie! But it has to be a feature. You already know the title, "The Volunteering!” Starring Samuel Jackson. Warning though -- I’d make it a horror film. Imagine the voice over for the trailer:

“Flight 3411. Assault, blood and the screams of an innocent man. Unsuspecting passengers witness horror unlike that they have even known. “The Volunteering” begins, its wrath a terror to see -- and on the morrow -- it comes for thee! (At this point in the trailer Sam Jackson stands up from his seat and yells… wait-for-it...) ‘I've had it with this mother f**king volunteering on this mother f**king plane!’”

If you like this you might like the GCNlive talk shows: The Freedom Feens or Free Talk Live. Both shows often dealt with libertarian freedom and rights.