Forget caucuses and conventions; just put everyone on the primary ballot 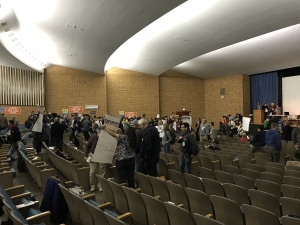 As a new Minnesotan, I thought I should familiarize myself with the political process in my new state. I was politically active in Montana, but never attended a caucus or convention because they aren’t held in Montana. Back in 2010, the Republican Party scrapped its caucus after just two years, citing its unpopularity as the reason. The Republican Party and I finally found something upon which we agree completely.

The lack of minority representation was blatant at my very first precinct caucus and even more so at the organizing unit convention and city convention. Despite my neighborhood being 41 percent black, the attendance at all the caucuses and conventions was probably three-fourths white or so. If that’s not reason enough to scrap party caucuses and conventions, here’s some more.

My first Minnesota Democratic-Farmer-Labor (DFL) Party precinct caucus gave me some hope for this thing we call democracy that isn’t actually democracy. I met people in my community who cared for my community as much as me, and while the turnout was a bit discouraging, I vowed to do something about it. I volunteered to call my DFL neighbors to remind them to attend the next precinct caucus so my community wasn’t underrepresented.

While caucus agenda items were accomplished slowly to start, the pace picked up as everyone got the hang of things. We conducted a relatively efficient meeting. I submitted two resolutions to be considered for adoption by the party: one to legalize cannabis, and another calling for an independent redistricting commission to draw district boundaries instead of allowing politicians to employ partisan gerrymandering to make district races less competitive. Both were accepted as written to be considered at the upcoming organizing unit convention, and both were voted to be included in the DFL platform at the state convention.

I wanted to see the ugly innards of Minnesota politics, so I volunteered to serve as a voting delegate at the organizing unit convention as well as the city convention. I got exactly what I wanted, but it I didn’t want it for very long.

The organizing unit convention, again, started slowly. Technical difficulties with audio and video equipment resulted in a late start. Once we were underway, however, I appreciated the speeches delivered by DFL candidates running for various offices, including governor and sheriff. I got a sense of who I liked and collected some reading materials on the candidates.

Of course, with so many people in one place, there were more than 20 sub-caucuses, each of which was directed to a certain area of the high school auditorium. Delegates then seek out the sub-caucus they prefer and take a seat with the rest of the delegates in their organizing unit. That’s not the end of the game, though. Sub-caucuses who fail to recruit enough delegates to earn a vote at the state convention can merge with other sub-caucuses. The more than 20 sub-caucuses were whittled down to about half that in a half hour or so, combining the names of sometimes three or four sub-caucuses.

The DFL city convention was a mess from the start. We started almost two hours late because of technical difficulties when one loud voice could have kicked off the agenda. Instead we waited for someone to troubleshoot the audio system in the gym at North High School in Minneapolis.

Since we were seated by district and precinct, I struck up conversations with my neighbors, some of whom I remembered from the precinct caucus and organizing unit convention. I asked them for whom they intended to vote, and we were mostly in agreement. I familiarized myself with the candidates for school board and spoke to a few of them. Then I sat around for hours until the school board candidates gave their speeches, which actually influenced my vote.

The rest of the nearly eight-hour day was spent either arguing over the rules, procedure or order of the agenda items. Most people left immediately after the winners of the DFL endorsement for school board were announced. I stuck around after to elect people to city DFL positions to make sure a fiasco like that never happened again. Frankly, I could do without caucuses and conventions entirely if we just put everyone on the primary ballot. Most who don’t receive the endorsement end up running anyway.

In Minnesota, we have five pairs of DFL candidates running for Governor and Lieutenant Governor. The DFL state convention is supposed to weed out the competition prior to the primary election. Party conventions are designed for political parties to unite behind specific candidates, and specifically, candidates the majority of party delegates like most. But when everyone runs anyway, there isn’t much unification occurring.

I knew who I liked for Governor the moment she opened her mouth. Erin Murphy was my candidate after delivering a two-minute speech at the organizing unit convention. She sounded most adamant and passionate about the changes she would attempt to make, and I agreed with those changes. But she wasn’t the candidate with the most progressive stance on cannabis, which is a big issue for me.

Of the three candidates most likely to win the primary, Tim Walz is most supportive of legal cannabis, going so far as to say all those incarcerated for cannabis should be released. Murphy isn’t willing to go that far, nor is she willing to allow home cultivation of cannabis. Walz is, but he doesn’t seem to me like a candidate with the enthusiasm to win a swing-state election for an office as high as Governor, and that seems to be a sentiment shared by DFL voters.

Murphy, with her support from the nurses union, secured the DFL endorsement at the state convention, but she was running third in the latest poll conducted. According to NBC News and Marist, Minnesota Attorney General Lori Swanson had a four-point lead on Walz and led Murphy by 17 points as of July 19. The very next day her running mate, U.S. Representative Rick Nolan, was accused of allowing a top congressional aide resign quietly in 2015 after being alleged of harassing young, female staffers.

The Minnesota DFL primary election for Governor is effectively a three-way race, and since ranked-choice voting isn’t employed in Minnesota primaries (it was in Maine for the first time and Mainers voted to keep it that way), DFL voters won’t have the luxury of choosing the candidate they like best. They’ll have to choose the candidate they think has the best chance against a Republican challenger.

Luckily for the Democrats, the Republican Party is experiencing the same problem. The GOP endorsement went to Jeff Johnson and Donna Bergstrom, but former Governor Tim Pawlenty is still running and could very well win the primary despite losing his party’s endorsement. What was the point of these conventions again? I say forget caucuses and conventions and just put everyone on the primary ballot. Political parties would save some money, we’d all save some time, and the primary election is the best means we have to include as many people as possible in the democratic process, or whatever you want to call it.