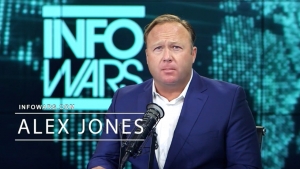 No, my friend. It will be far more controversial than all of those combined. And I know this because it’s all over the media. With media coverage this broad, Mr. Jones must have some huge controversial issue brewing! So what is it? Why is the media all up in Alex Jones’s grill?

Because Alex Jones is in a custody battle.

With his ex wife.

Wait. What? But I don’t give a rat’s ass about his custody battle! I thought this was going to be legit!

Maybe some family and friends but that’s it. That’s the complete list of people who should care. But here we are. And I have to waste my day writing about Alex Jones’s personal business because media vultures love to swoop in for the kill. Especially when “the kill” is mud-slinging non-news like a custody battle!

Hold on! But the coverage isn’t about his “custody battle.” The coverage is about Jones’s lawyer claiming, during the custody battle, in court, “Alex Jones is playing a character … he is a performance artist.”

I see what you’re talking about now. Alex Jones does indeed oft claim mainstream media is all “fake news.”   I can see how that might stick in folk’s craw, what with that hypocrisy and all.

Okay. Now I see why the coverage is twenty four seven. Alex Jones claims all other news is fake and then admits that his show over at Infowars.com (and here on GCN) is performance art -- which, I gather, is a clever way of saying “fake.” That’s newsworthy. If this is the first time Alex Jones has admitted to something like this. I can understand the coverage.

Except, of course, for the fact that Alex Jones has called himself a performance artist many, many times. Without any coverage. At all. Unless you count mine. That I wrote two weeks ago. In which I cite Alex Jones calling his very own work “performance art.”

Alex Jones says, multiple times, on his show that he is a “performance artist.” Zero coverage.

Well, I know you work with him and all, but you can’t defend everything he says. Can you?

But I don’t have to defend him. The Constitution of the United States does a much better job of defending him then I ever could. I’ll even go so far as to tell you I disagree with about seventy-five percent of what I hear Alex Jones say. And I will still roll my eyes in your general direction if you claim I am defending him because I “work with him.” I’m not doing it. He doesn’t need it.

But let's get back to the important custody battle!

Well, no. I’m not going to write about his custody battle. "Former married couple goes through bitter divorce and says horrible things about each other" is not news.

So then let me get back to his claim about performance art. I see the easy way out. Alex Jones will claim, “What I say is truthful but HOW I say it is performance art.”  Which gives him carte blanche to say whatever he wants and kind of, you know, avoid responsibility.

Okay. Fair enough. He’s not the first person to hide behind the Constitution. He won’t be the last. The Constitution does indeed give him the right to say just about whatever he wants. It doesn’t, however, protect one from consequences.

Take Len Pozner. Len’s only son, Noah, was murdered in the Sandy Hook Massacre. Len has been dogged and harassed by “Truthers.” Truthers, as defined by the totally legit dictionary:

I hate that in the world we live in this exists.

Len Pozner has been harassed by truthers for years. In 2015 a woman went to jail for sending Mr. Pozner threatening messages. I’m sure other Sandy Hook family survivors have similar stories. And, yes, Alex Jones and similar fringe alt-right pundits are partially to blame.

And I will only say, “partially.” A person unstable enough to cross state lines and send death threats to someone they think is a “crisis actor,” also shares a hell of a lot of the responsibility. So while I honestly believe Mr. Jones has the Constitutional right to say Sandy Hook, in his opinion, was staged. It’s still a shitty thing to say.

And there have been consequences. And it looks like they happened to the wrong people. Len Pozner does not deserve to have idiots crawling through his lawn looking for proof of “his crisis acting involvement,”  or digging through his garbage hoping beyond hope to find the “smoking gun” that doesn’t exist. He certainly doesn’t deserve to be taunted or threatened.

He deserves to be left alone. His child was murdered. It wasn’t fake. There is no such thing as a crisis actor. And if you believe Sandy Hook was a hoax then you’re an asshole.

And I still don’t care about Alex Jones’s custody battle.