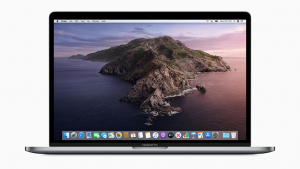 As most of you know, the next version of macOS is named Catalina, or macOS 10.15. But I wonder how long Apple is going to use the traditional number ten versioning before goes to 11, or somewhere.

No matter. Regardless of the naming scheme, Apple has packed the usual bunch of new features. I suppose the most meaningful for the long-term is Catalyst, which allows for a new range of apps that can run on both iPad and Mac. I suppose it’s possible that this is the first step towards switching Macs to Apple’s brand of A-series ARM processors. It also helps developers build apps for both platforms with, supposedly, some tweaking here and there.

One key goal is to help iOS developers create Mac versions without a lot of time and expense.

Another important change — to some it’ll be the most important— is splitting iTunes into Music, Podcasts and TV apps. Your content libraries for all three remain intact, and the online iTunes store will still be there. If you felt that iTunes had become too bloated, too confusing, the new scheme might be welcome. It basically means that you are running apps that originated on the iPad on your Mac. You get a consistent look and feel on both platforms, minus the interface differences.

Honestly, I don’t really care. I have been using iTunes since the days that Apple acquired SoundJam from Casady & Greene.

So where am I gong with this? So I usually install a macOS beta by this point, but not this time, and it’s frustrating.

Hardware compatibility isn’t the issue, as most any Mac released in the last seven years is compatible, along with the 2013 Mac Pro. That leaves my 2010 17-inch MacBook Pro in the dust, but it hasn’t been supported for a while. It still works quite well, so I’m not about to send it out to pasture. Even that rumored 16-inch MacBook Pro, which may or may not arrive this  fall at the earliest, won’t be on my shopping list, largely because of its estimated $3,000 price tag.

But my iMac is fully compatible with Catalina.

My problem is Apple’s decision to finally drop 32-bit support, meaning that many older apps simply won’t launch in Catalina. Even an app that is 64-bit, but maybe has a 32-bit help feature, won’t launch. Apple has been heralding the arrival of this change by putting up messages that 32-bit apps were not “optimized” for a Mac when such an app was opened for the first time.

For the most part, it’ll probably make little difference for most Mac users. If an app is still being developed, a Catalina-savvy version will probably be released, and maybe it’s already there. But there are apps that won’t be updated, perhaps because the developer is no longer in business or working on the product.

So here’s my ongoing road towards 64-bit, and I still have a couple of problems.

It means I finally have to dispense with Adobe Creative Suite 5.5.

I have avoided subscribing to Adobe’s Creative Cloud partly because I don’t want to add another monthly bill, and I am no fan of the “pay forever” marketing scheme. For individuals it’s $9.99 for a Photography package that includes Lightroom and Photoshop. Any other single app is $20.99 per month; the full app suite is $52.99 per month.

Now Creative Suite 5.5 is not just 32-bit, but requires a now-obsolete version of Java to launch. I’m trying out Affinity Photo and Pixelmator to see if either, or both, can offer the features I need from Photoshop. So far it’s promising.

But I’ve yet to resolve the audio question. As part of my production workflow for The Paracast, I use The Levelator, from The Conversations Network. As the title implies, it fixes level differences in an audio file, a sort of normalize on steroids. It is designed for drag and drop use.

Our network, GCN, requires 12 separate files for a single episode. But our premium ad-free version for The Paracast+, is combined into a single file courtesy of a scripting app, Stitch, which is supplied as part of the Monbots package offered by Felt Tip, publishers of Sound Studio.

These apps are 32-bit. As far a upgrading to Catalina is concerned, they are the deal breakers.

Now there are other ways, free or low-cost, to combine files in a single batch operation. Felt Tip is also working on a solution, but The Levelator is another story.

Audio apps do have a normalize function, which provides a consistent gain to an audio file. But that feature is nowhere near as powerful as The Levelator. It’s near-perfect, broadcast quality, though it doesn’t do anything to help with background noise.

There are automatic gain control (AGC) plugins that promise to achieve a result similar to The Levelator. But the most promising ones aren’t free. Some podcasters recommend Auphonic, an online audio processing service that optimizes levels, noise and other settings. Auphonic will process up to two hours of files per month free. For more hours, prices range from $11 per month for nine hours to $89 for 100 hours.

As a test, I took a particularly noisy episode of our premium podcast, After The Paracast, and gave it the Auphonic treatment. The process involves uploading to their servers, and when it’s ready, you download the “fixed” version,

I tried two levels of noise reduction, the default(“Auto”), and “High.” The end results were no different from what I could achieve myself with The Levelator and the noise reduction or Denoising feature in another audio editing app, Amadeus Pro. The process involves sampling the noise content (say during a pause between sentences) and basing its fixer-upper algorithm on it.

There is hope for users of The Levelator, however. I was recently informed by someone from The Conversations Network that a true 64-bit person may be possible, and I’m awaiting an update. Obviously lots of people need this app, and I wouldn’t mind paying a small sum to help them keep it going.

Until or unless my audio processing dilemma is resolved, Catalina remains on the back burner.

Update: A support person from Auphonic wrote that the corrected audio file was what they expected considering the issues. But it hardly makes sense to pay for a service that I can largely duplicate myself — well, if The Levelator is updated, or I find an affordable plugin to replace it.

In the scheme of things, not using a new macOS version is not so big a deal. The new features are nice — and I suppose I’ll get used to having to launch three apps to duplicate the functions of iTunes, since I do it now on my iPhone. Catalina will no doubt be faster and more reliable, since that’s been the direction Apple has taken in recent years with mixed results.

But if I never upgrade to Catalina, I won’t lose any sleep over it.