My father was a big shot in the worlds of engineering and education.

He retired as the Dean of the College of Engineering at Bradley University after a years long career, producing hundreds of engineers for companies like Caterpillar.  One of those young engineers was NOT me.

If I had come to his office one day, when I was still in college, and told my father that Caterpillar had hired me for (this was the 70s) say a mere $20,000 a month in an unspecified position with unspecified responsibilities he would have come unglued.

He would NOT have been proud and congratulated me.

He would have rightfully called the Chairman at Caterpillar (in those days, his friend William L. Naumann), demand I be fired and would never have allowed such a conflict of interest to take place.  (I actually had to fight him over the $200 a month job of running the University’s radio station and he ultimately did have me fired after two years.)

His son, Hunter, is a drug addict who got himself kicked out of the Navy.  Serious skillset there.

His father basically had a few responsibilities as Vice President.  In addition to staying alive in the event of the President’s untimely demise, two of those were representing President Obama’s policies in China and the Ukraine.

After he got kicked out of the United States Navy, Hunter hitched a ride to China on Air Force Two and a few days after they returned, Hunter’s private equity company got a BILLION dollar “investment” from China’s government.

Doubtful.  But to listen to the former Vice President, sonny boy didn’t do anything wrong—like he intimated the Trump children have.  There is, however, a difference.  The Trump children were in business long before their father ran for President.

Does Joe really want to take the position that someone who is a businessman CANNOT serve in public office?

You see, Donald Trump is the first President we have had in many years who is NOT part of the political club.  Who is so wealthy he cannot be bought, despite the ridiculous claims by people that, somehow, he has become enriched by becoming President. However much the media hates him, it would be very hard for a President as vilified as he to actually increase his net worth while in office.

And his inability to be bought is just another reason he is vilified by people and institutions which would love to buy him.

How is it that a clown like Joe Biden could use his position to make his son wealthy and look the media in the eye and say that nothing was done wrong?  That during his tenure there was no corruption?

That’s the very swamp which Trump is in the process of draining.  People expect this crap in DC, just as they used to expect the mob to control Chicago, New York and Las Vegas.

Biden would have you believe that he’s an honest man in Washington—that Donald Trump is corrupt.  That using his position as Vice President to enrich his son never happened.  And, if it did, well, that’s how things work in big time politics.

The truth can be divined in a quote from a video of Biden talking to the Council on Foreign Relations about a Ukrainian prosecutor who apparently was getting a little too close to Sonny Boy. “I said we’re not going to give you the billion dollars. They said ‘you can’t do that, you have no authority, you’re not the president. I said if the prosecutor’s not fired, you’re not getting the money.  Well, son of a bitch, he got fired."

(Editor's note: This quote is taken from a one hour video of Biden (and others) discussing Biden's efforts on behalf of the Obama administration to pressure Ukraine into prosecuting corruption and firing prosecutor Viktor Shokin, who was universally recognized by diplomats and officials as an ineffective prosecutor who refused to go after corrupt politicians. Shokin's office was also investigating Burisma, a company that Biden's son Hunter, was a board of director member. Shokin was later fired and replaced by another prosecutor. Therefor, many are pushing an idea that, Joe Biden pressured Ukraine to fire the prosecutor in order to protect his son who must have done something illegal while he was on the board of directors of this company. The above quote is used as "proof." The first  problem with this is that Biden's quote is taken completely out of context and if you watch the full hour video, which is much more interesting than you would expect it to be, it speaks for itself. The second problem is that, if you read about the actual Burisma investigation it dealt with Ukraine's Ministry of Ecology, which allegedly granted special permits, that may or may not have been illegal, to Burisma between 2010 and 2012. Hunter Biden did not join the company until 2014. But, because the investigation was still on going when he joined the company it is factually accurate to say that Hunter Biden was on the board of directors while the company was being investigated by Shokin's office. But, as you can see, it would be impossible for Hunter Biden to have anything to do with the investigation since he wasn't even involved in the company until multiple years after the fact. Finally, the reason Shokin was actually fired was because he refused to go after corrupt politicians. He was replaced by a prosecutor who was known to go after corrupt politicians. So, while it is all true that Hunter Biden raised $1.5 billion with China's state bank by having his fater, who was Vice President at the time and was in China on a state vist, introduce him to some very wealthy Chinese folks, which is a bit shady. There is clearly nothing going on with the no story of the Burisma / Hunter Biden investigation as it was about an issue that was two to four years before Hunter joined the company.) 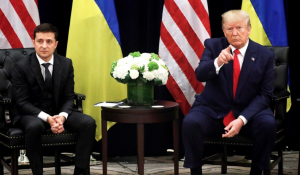