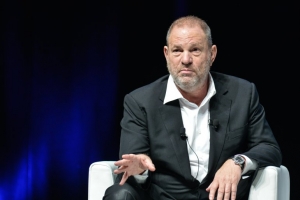 Famous indie movie Executive Producer Harvey Weinstein has been fired from The Weinstein Company. Last week the NY Times broke a colossal story alleging decades of harassment and abuse by movie mogul Harvey Weinstein. Over the weekend, the New Yorker followed up with From Aggressive Overtures to Sexual Assault: Harvey Weinstein’s Accusers Tell Their Stories - detailing two decades of Harvey’s sexual harassment, sexual assault (up to and including rape) and his threats of ruining careers to cover it all up.

Harvey Weinstein, the man behind some of the biggest indie hits of forever. All of Tarantino's films, Kevin Smith's movies, Oscar Winner's - The King's Speech, Silver Linings Playbook, Shakespeare in Love -- to name a few.

Actress Rose McGowan came out almost a decade ago and told her story of being sexually assaulted by a studio head. People took her seriously but didn’t take her that seriously, because, at the time, she refused to name names. Citing the fact she still wanted to work in Hollywood and knew if she named the specific person, he would probably destroy her career.  But this week, as several other women have come forward, Rose finally confirmed her assault was at the hands of Weinstein.

Angelina Jolie, Gwyneth Paltrow and several other actresses going back two decades have come forward with stories of sexual harassment or worse, at the hands of Harvey Weinstein.

This weekend, Paltrow went on record that, when she was 22 years old, Mr. Weinstein  summoned her to his hotel suite for a meeting about her upcoming film, “Emma,” which Weinstein was Executive Producing (i.e. - putting up the money for) and had just cast to play the title role.  Paltrow says that it wasn't "a meeting" at all. Harvey sat her down and began massaging her (without her consent) and then suggested they head to the bedroom.

She said about the incident, “I was a kid. I was signed up (for Mr. Weinstein’s movie), I was petrified" and later, “I thought I was going to get fired.”  She turned him down and fled the room as fast as possible, confiding in her then boyfriend Brad Pitt. Pitt immediately confronted Weinstein and told him to leave Paltrow alone and never bother her again.  Weinstein responded by warning her not to tell anyone else about his come-on or he would ruin her career.

Brad Pitt’s people have confirmed both facts that Paltrow told him about the incident and that he (Pitt) confronted Weinstein.

Brad Pitt. One of the biggest movie stars in the world. Pitt knew in 1996 that Weinstein was a creeper. Which means, I suspect, that lots of other people have known over the years too.

And nothing ever really came of it.

The Paltrow incident was twenty one years ago. And it’s just now coming out that he allegedly harassed, assaulted and raped women for two decades.

I hate to say this but -- a powerful man in Hollywood abusing his position and targeting vulnerable young women for assault -- doesn't exactly shock me.

I’m not even shocked that it took so long to come out. The Onion’s aptly titled ‘How Could Harvey Weinstein Get Away With This?’ Asks Man Currently Ignoring Sexual Misconduct Of 17 Separate Coworkers, Friends, Acquaintances sums this position up nicely.

There are probably a lot of people complacent in Mr. Weinstein's abuse but one thing is certain, the man commanded immense power. Do a quick Google search for “Harvey Weinstein” and “careers he’s ruined” and you’ll see what I’m talking about. He bred fear. And so he was able to get away with it.

The assault allegations have rolled in and due to them, Harvey Weinstein’s wife has left him  and he’s been fired from his job -- from the company he co-founded.

That’s all good. But it’s not good enough.

I would like to mention that all the allegations against Harvey Weinstein are just that, -- “allegations.” Harvey Weinstein certainly deserves his day in court. But just as in the Bill Cosby case(s), when that many women come forward, you can rest assured both men are guilty.

I hope Weinstein gets his day in court.

And then I hope he goes to jail for a very long time.