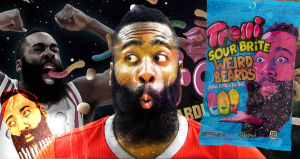 James Harden’s beard is starring in an ad campaign for Trolli candy—without James Harden. So it stands to reason that if not for his beard, The Beard wouldn’t be making $18 million from endorsement deals in 2018, according to Forbes. That’s fourth amongst his NBA peers, but only The Brow (Anthony Davis) has a trait like The Beard distinguishing him from his peers or other celebrities in general. So what is the net worth of James Harden’s beard, and for what amount could it be insured?

In the past, exotic facial hairstyles were indicative of social status and a man’s ability to provide. Maintaining some of the mustaches of the past required investments of time and money. But these days men are spending less on grooming products, not because of increased competition in the marketplace from companies providing automatic delivery services like Harry’s and Dollar Shave Club, but because men are grooming their facial hair less often.

Facial hairstyles are in style, especially amongst hipsters. Unshaven Millennials are even causing a crisis in the razor industry. A 2016 study published in the Journal of Evolutionary Biology found that “men are less attractive when clean-shaven than when they are stubbled or bearded,” but how much less attractive?

The study gives us a means to quantify the value of James Harden’s beard relative to other facial hairstyles, at least when considering a market of females of European descent who find men sexually attractive. Men were also considered as possible respondents for the study, but the 8,520 female participants were chosen based on Kinsey scale scores. Basically, the participants had to be at least as interested in men as they were in women.

A full beard like Harden’s was preferred to a clean-shaven face by almost 12 percent, and when it came to finding that soulmate for a long-term relationship, women preferred bearded men over clean-shaven men by almost 10 percent.

Sports fandom, as you know, is a long-term relationship, so James Harden’s beard bodes well for the Houston Rockets as well as the companies he endorses. Women, at least, are more likely to consider and potentially establish a long-term relationship with a James Harden brand because of his beard, and that increases Harden’s earning potential. According to research conducted prior to the 2016 study, “Men with beards report higher feelings of masculinity, have higher testosterone and endorse more masculine gender roles than clean-shaven men,” so Harden’s beard might even have an effect on his play given the increased confidence, testosterone, and aggressiveness. But even if the beard was The Beard’s key to becoming MVP, quantifying that potential effect is impossible.

Regardless, The Beard makes more money in endorsements because of the beard. There’s just no way he’s the clean-shaven face of Trolli candy. How much more Harden makes because of his beard is difficult to determine because we can’t apply a similar percentage at which men prefer men with beards. If social media is any indication, men also prefer bearded men over clean-shaven men. We know how much men loved Chris Evans’ bearded Captain America in Avengers: Infinity War, and we know facial hair to be one way men advertise their admiration for other men.

Advertising our Admiration of People through Hair

You probably grew up imitating the swing of your favorite baseball player or the signature move of your favorite basketball player. You might even employ “The Harden Scoop” or initiate contact on dribble drives like The Beard. I adopted a combination of Kirby Puckett’s leg kick and Chuck Knoblauch’s batting stance. But I also bought a Puckett jersey to advertise my admiration of him off the field.

We can’t control who we are, but we can control, to some extent, our appearance and attire, which is how most of us advertise our admiration for our idols. Clothes are the most common and easy means of advertising our admiration of people. Sometimes you actually feel like your favorite player when you wear his or her jersey or branded sportswear on the field or court. But when the game is over and you shed your sweaty James Harden jersey, the increased attractiveness that might have resulted from wearing that jersey dissipates. Unless your game relative to your peers is as good as Harden’s relative to his, which would mean your Mr. Basketball in your state and lead the league in free throws, only a beard like The Beard’s can augment your attractiveness when the clothes come off.

You likely tried to reproduce the hairstyles of your favorite celebrities growing up, learning that your skull is too oddly shaped for the Michael Jordan look, or discovering cowlicks that make your hair stand up in all the wrong places. Even hair is something we can’t completely control, but hair extensions and installations, hair dyes, gels and sprays help.

We men can’t control how or where our facial hair grows either. I have one sideburn that comes in beautifully and another that looks more ridiculous the longer it gets. I also have a small, bald spot on my neck. Despite all that, I’ve mostly sported the same facial hair since I was first inspired to do so.

Just before my senior year of high school, my father, sister, and I drove from Eastern Montana to Branson, Missouri. My dad played the same CD for an entire day of driving, and we had another nine hours to go the next day. Knowing we’d spend around 36 hours in a car, I thought there was no way I’d enjoy this trip. But I was pleasantly surprised by Branson. It’s like a Vegas for senior citizens without gambling. There were plenty of shows to see, though, ranging from comedy to magic to music—lots of music.

One night I saw Blues Brothers impersonators give one of the most inspired performances I’d seen from anyone besides MC Hammer (even my dad, who disliked his music, was impressed with his performance because of his intense, nonstop dancing). I was a huge fan of the Blues Brothers movie and music, so I appreciated their effort to emulate two of my idols, Dan Aykroyd and John Belushi. At 17, I had both the movie soundtrack and their double-platinum, live record “Briefcase Full of Blues,” one of the best live performances ever recorded. Yes, two comedic actors backed by some of the best blues musicians in the country cut one of the best selling blues records of all time that climbed to the top of the Billboard 200 in February of 1979.

This was 2008, and after that performance I started growing my soul patch and sideburns. Since then I’ve retained the look except for a few job interviews and first dates and No-shave November. Women I’ve dated have asked me to shave the soul patch, and I’ve refused. Like James Harden’s beard, my soul patch is part of my identity. It’s representative of my soul. But I never considered my stubborn refusal to shave it this past decade as an indication of my social confidence until now.

The soul patch might be one of the least common facial hairstyles rocked these days, so you’ve got to have confidence to rock it. Not the confidence Michael Jordan had to sport a Hitler-stache in a Hanes commercial, but confidence nonetheless. Handlebar mustaches, which seem to be making a comeback, require both confidence and care-taking few facial hairstyles demand. When properly maintained and presented, the handlebar mustache screams social dominance...or at least advertises an ability to pay for mustache wax.

Speaking of handlebar mustaches, this one belonging to Aussie cricket fast bowler Merv Hughes was insured for $370,000, according to Time Magazine. That got me wondering if James Harden’s beard is insured and for how much.

Insuring facial hair seemed frivolous to me at first, but then I thought about Michael Jackson’s hair catching fire on the set of a Pepsi commercial. What if he lost a gig because of his burnt hair? Worse yet, what if he was unable to ever grow that hair back? James Harden might not be doing many commercials featuring pyrotechnics, but what if he required facial reconstructive surgery for a broken jaw and couldn’t grow his beard back? Could he end up losing endorsement deals like the one with Trolli candy?

We do know Harden would be 12 percent less attractive to women if he couldn’t grow any facial hair. Whether that affects his marketability and resulting endorsement earnings is debatable given his MVP-caliber play on the court. But a man nicknamed The Beard sporting a beard that stars in its own candy commercial stands to lose something if Harden loses the ability to grow that famous facial hair.

He’d at least lose the chance to make $10 million, which is apparently what it’d cost to convince Harden to shave. But given his endorsement earnings, what would an insurance policy for James Harden's beard cover and for how much could Harden’s beard be insured?

State Farm doesn’t cover facial hair, and multiple requests for comment from Harden’s agent didn’t receive responses. But we do know Harden sought out Trolli because he likes the candy and the brand being unique like him and his beard. While there's no report of what Harden is making with Trolli, his endorsement earnings were estimated at $17 million prior to the deal and $18 million after the deal. And unlike Harden's $200-million, 13-year deal with Adidas, the Trolli deal might not have materialized without the beard.

So if we ignore Harden's endorsement deals with Adidas, Beats, Electronic Arts, Foot Locker, State Farm and even BodyArmor, James Harden's beard is likely worth more than a million dollars. That estimate is comparable to Head and Shoulders insuring Troy Polamalu's hair for $1 million back in 2010 and all of these also insured by Lloyd’s of London, including Betty Grable’s million-dollar legs, Dolly Parton’s breasts, and Merv Hughes’s mustache. If he hasn’t already, Harden should be insuring his beard upon reading this.