Five great games for your phone! 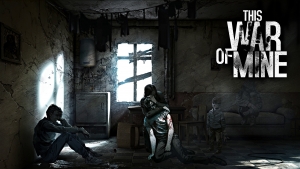 Need a last second holiday gift? Looking for a way to spend that Christmas Google Play or itunes gift card? I have just what you need -- awesome, cheap games for your phone!

Everyone has played Angry Birds, Plants vs. Zombies and Limbo (but if you haven’t you should totally check them out) so I went a different route. Normally I play games on a console or PC, which tend to be more story based than traditional point and click phone games. But it occured to me that many of the story based games I love and play are probably available for your phone.

So I checked. And I found some!

Here are a few of my favorites presented alphabetically:

The Banner Saga 1 & 2: I really love this game. It’s a great mix of storytelling and turn based tactical combat. The art is gorgeous and the story choices are sophisticated enough to keep you guessing. From the website of game designer Stoic Games:

“Epic role-playing Viking saga where your strategic choices directly affect your personal journey. Make allies and enemies as you travel with your caravan across a stunningly beautiful, yet harsh, landscape. Carefully choose those who will help fight a new threat that jeopardizes an entire civilization. Every decision you make in travel, conversation and combat has a meaningful effect on the outcome as your story unfolds. Not everyone under your banner will survive, but they will be remembered.”

Playing time: Approx. 10ish hours to complete the main quest in Banner Saga 1 with perhaps 15ish hours to complete Saga 2. Additional hour can be spent in game play through Survival Mode - a series of increasingly difficult battles! (I just got killed in battle 32 of 40. Must start over. Arggh!)

Beholder: A really fun game set in a grim dystopian future where an oppressive totalitarian State controls every aspect of private and public life. And it’s your job to root out anyone who speaks our or acts against the State! Of course you can rage against the State and hide the on going deeds of your tenants, if you wish -- just don’t get caught. Warning - this game is hard! From the Warm Lamp Games game designer site:

“You are the State-installed manager of an apartment building. Your daily routine involves making the building a sweet spot for tenants, who will come and go; however, that is simply a faced that hides your real mission … spying on your renters! Your primary task is to covertly watch your tenants and eavesdrop on their conversations. You must bug their apartments while they’re away, search their belongings, and profile them for your superiors. You must also report anyone capable of violating the laws or plotting subversive activities against the State to the authorities.”

Playing time: Several hours to finish the main story with an additional 20ish hours in order to unlock all possible endings.

Heart’s Medicine: Time to Heal: A super charming point and click time management game -- that happens to be a touching medical based drama. What sets it apart from many point and click games is the tender storyline woven between game goals.

“Heart’s Medicine - Time to Heal is an intense medical drama tied into a casual game this is moving people to tears. The game has a gripping and unique storyline, original singer/songwriter music, highly detailed artwork and animation, cool addictive gameplay and an insane amount of heart … Become a doctor in a romantic medical drama and join the life of aspiring surgeon Allison Heart as she works her shifts at Little Creek Hospital. Experience love, intense action, realistic drama, crazy funny moments and the beauty of celebrating life!”

Repeat playability: Medium. Once the story is over you can repeat gameplay but without the darling story it becomes a standard diner dash game.

The Silent Age: A clever little point and click drama that bounces back and forth in time. This game is more story driven than game driven. Solving the puzzles won’t be much of a challenge for most savvy game players but the story writing is strong and the plot becomes more compelling as it moves forward. The game is downloaded as five separate chapter so make sure you get chapter one!

“Help Joe as he travels between the groovy present of 1972 and the apocalyptic future of 2012 to discover the truth behind humankind’s extinction - a quest entrusted to him by a dying man from the future. Use your portable time travel device to solve puzzles that bring you closer to answers and saving humanity.  Winner of the 2013 Causal Connection Indie Prize.”

This War of Mine: This absolutely gorgeous black and white shaded game is a gut wrencher. A survivalist war game unlike anything I’ve played. After several times (about ten hours game time) I’ve yet to survive to see the end of the war. I’ll let the folks from 11 Bit Studio, the game designers, explain it for you:

“In This War of Mine you do not play as an elite soldier, rather a group of civilians trying to survive in a besieged city; struggling with lack of food, medicine and constant danger from snipers and hostile scavengers. The game provides an experience of war seen from an entirely new angle .... The pace of the game is imposed by the day and night cycle. During the day snipers outside stop  you from leaving your refuge, so you need to focus on maintaining your hideout: crafting and trading and taking care of your survivors.At night, take one of your civilians on a mission to scavenge through a set of unique locations for items that will help you stay alive … Make life-and-death decisions driven by your conscience. Try to protect everybody from your shelter or sacrifice some of them for longer-term survival. During war, there are no good or bad decisions, there is only survival. The sooner you realize that, the better.”

Playing time: The game is won when the war ends which is randomly decided each time you load a new game. I would say approx. ten-ish hours to finish the story once.