Firearms are the people’s liberty teeth in the face of tyranny! 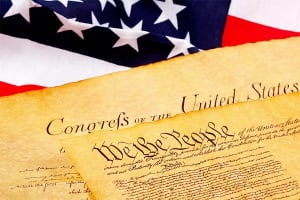 “When government takes away it’s citizens right to bear arms it becomes the citizens duty to take away the government's right to govern." -Accredited to President George Washington

It is interesting how this is playing out in front of the people in this country when it comes to more illegal encroachments or infringements on law-abiding gun owners. Remember, they accuse the law-abiders of the crimes of the law-breakers (1 John 3:12).

Here is how it is played out:  On one side of the divide and conquer aisle (Mark 3:25) we have Donald Trump, sold to you as the Republican, who calls for illegal “red flag laws,” which are not law.  In the end, they will be aimed at their political opposition.

On the other hand, we have those who are sold to you as the Democrats, who are calling for the removal of AR-15s and other semi-automatic weapons.

Which do you prefer?  Do you prefer small infringements through Donald Trump, or complete disarmament by Democrats? Either way, you are being disarmed and tyranny wins out.

I would advise everyone to take heed to President George Washington, who is responsible for arming the citizenry that we are to “guard ourselves against the impostures of pretended patriotism” (Matthew 24:5-8; 2 Corinthians 11:14).

If you are paying attention, this is not only leading through “created” opposition, but it's also happening through what is called the Hegelian dialectic (John 8:44).

The Hegelian dialectic is defined as "a framework for guiding thoughts and actions into conflicts that lead to synthetic solutions (of a proposition- having truth or falsity determinable by recourse to experience) which can only be introduced once those being manipulated take a side that will produce the predetermined agenda (Outcome)."

Recently, the mainstream media’s push of un-constitutional debates and their Communist candidates included Beto O’Rourke and his gun confiscation plan.

'No, it’s not voluntary 'It is mandatory,'" O'Rourke said of his proposal. "It will be the law. You will be required to comply with the law." He then went on to say:

"We expect people to comply with the law."

The problem that Mr. O’Rourke is having here is that it is not law nor will it ever be law regardless of what he or any other Communist candidate wants you to believe.

“The Constitution shall never be construed to prevent the people of the United States who are peaceable citizens from keeping their own arms.” – Samuel Adams, Massachusetts Ratifying Convention, 1788

Americans, where have these anti-gunners received delegated authority to advance their agenda?  They did not receive it from “We the People.”

Have Americans really become this dumbed down as to believe that representatives change laws that counter our rights? Our rights didn’t come from the state's generosity.  They came from the hand of God, period!

“The rights of man come not from the generosity of the state, but from the hand of God.” -President John F. Kennedy

Representatives of government in this country have, in fact, sworn to uphold the laws found in the US Constitution, not to tear it down and recreate it into the ungodly image of the United Nations.

Friends, look to history.  George Mason warned us that those who mean to disarm, mean to enslave. They mean to be your masters while you become their slaves, and the best way to enslave people is to disarm them (Hosea 4:6).

Look to the example, which our forefathers exhibited not just in writing, mind you, but also in action.  Our forefathers armed the people for the very purpose of what is happening in America today.

Americans must come to terms that corrupt politicians are not the type that you can help or rehabilitate.  They are the type that you must lawfully remove, or you will lose your God-given right! (Article 2, Section 4, US Constitution)

“The tree of liberty must be refreshed from time to time with the blood of patriots and tyrants.” – President Thomas Jefferson

It is the difference between a free people and an enslaved people.  There is no in-between (Luke 11:2).

Firearms are second to the Constitution in importance; they are the people’s liberty’s teeth.

Therefore, Americans, it is time to grin  (Romans 12:21) in the face of tyranny.