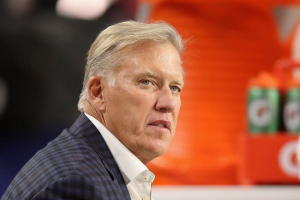 Super Bowl Champion Quarterback and Bronco’s General Manager John Elway revealed  to TODAY that he was diagnosed with a debilitating hand condition 15 years ago.  After he retired in 1999 he developed contractures, or permanent bending of his fingers.  It affected both his ring fingers such he couldn’t straighten them out and subsequently couldn’t hold a football.

In the interview he states,

“IT IS HEREDITARY AND IT ALSO CALLED THE ‘VIKING’S DISEASE.’

“IF YOU HAVE A NORWEGIAN BACKGROUND, YOU HAVE A HIGHER CHANCE OF DEVELOPING IT. THAT’S A POSSIBILITY FOR ME, BUT NOBODY ELSE IN MY FAMILY HAS HAD IT. I’M NOT SURE IF ME PLAYING FOOTBALL HAS PLAYED A PART TOO.”

“Viking’s Disease”, or Dupuytren’s Disease, is thought to have originated in the Viking population and spread throughout Northern Europe during the 9th and 10th Century.  It wasn’t until French physician, Baron Guillaume Dupuytren, described the flexion of the fingers and hand contortion that it received its modern name of “Dupuytren’s Contracture.”

In Dupuytren’s disease, the fascia, or fibrous layer that surrounds the muscles and tendons underneath the skin in the hand becomes thickened and tents, or tightens around the local area.  This can cause a contracture, or pulling of the finger to a position in which they can’t extend or straighten back out.

Risk factors for Dupuytren’s disease with resulting contractures include:

Treatments include conservative measures such as steroid injections, enzyme injections and therapy and in more severe cases surgical options are available.

John Elway states he chose to go the conservative route and forewent surgery.  It was successful and he now has normal movement of his fingers but the condition can return.  The football legend is currently a spokesperson for the Facts On Hand Campaign, raising awareness of this common condition.