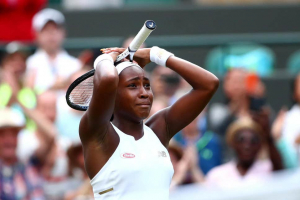 A couple of shocking Wimbledon twists for tennis fans. The very well liked and number two ranked Naomi Osaka lost today 7-6 (7-4) 6-2 to Yolia Putintseva (currently ranked 39). This was Putintseva’s first time at Wimbledon. (Editor’s note: Osaka has been in a recent slump and during the Wimbledon match committed 38 unforced errors, to Putintseva's seven.) But the real stunner is that young tennis prodigy Cori Gauff (ranked 313) beat five time Wimbledon champion super star Venus Williams (ranked 10) in round one of the tournament.

Gauff is fifteen years old playing in her debut tournament where she handedly defeated her tennis idol Williams 6-4 6-4. “It’s the first time I have every cried after winning a match,” Gauff told reporters after.

Wimbledon is a little different than the other three Grand Slam tennis tournaments as it is the only one played on grass, the others play on hardcourt.

The Australian Open plays on an acrylic topped hardcourt, the French Open and the US Open play on clay courts.

Why does this matter, you might ask?  Well, clay courts slow down the ball and produce a high bounce in comparison to grass or hard which means it takes away any advantage of big serves. Acrylic hard courts can vary is speed but generally faster than clay courts but not as fast as grass courts.

Grass courts, according to Wikipedia:

“Grass courts are the fastest type of courts in common use. They consist of grass grown on very hard-packed soil, which adds additional variables: bounces depend on how healthy the grass is, how recently it has been mowed, and the wear and tear of recent play. Points are usually very quick where fast, low bounces keep rallies short, and the serve plays a more important role than on other surfaces. Grass courts tend to favour serve-and-volley tennis players.

Grass courts were once among the most common tennis surfaces, but are now rare due to high maintenance costs as they must be watered and mown often, and take a longer time to dry after rain than hard courts. The grass surface, however, is the most physically forgiving to the human body because of its softness.”

Wimbledon continues and wraps up mid July with the Women's final on Saturday the 13th and the Men’s final on Sunday the 14th.

Update 7/8/19: Alas, Gauff's magical journey came to an end as she just lost 6-3 6-3 in the fourth round to former world number 1 and Grand Slam winner Simona Halep.