Sarah Huckabee Sanders leaving the WH at the end of June. 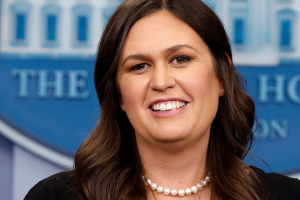 White House press secretary Sarah Huckabee Sanders will leave her position at the end of the month. Apparently, she plans to run for office somewhere with some speculating a gubernatorial run in her home state of Arkansas. Which, to be honest, is a little odd, as Hutchinson just won a reelection for Governor in 2018, so the next election won’t happen until 2022. It seems a little strange to me that Sanders would leave the press secretary job at the end of the month so she can - run for office years from now?

But, maybe. I guess campaigns do take a long time to build.

Regardless, Sanders has been something of a controversial figure. Her literal job description is to “act as spokesperson for the executive branch of the US government administration, especially with regard to the president, senior executives and policies.”  Okay, fair enough. But, she hasn’t held a press conference in something like four months, and has only held eight press conferences in the last year. So, I don’t really know what she does at work all day long.

How long would you keep your job if you only did your actual job description like, once every four months? Because I know I wouldn’t have my job long if I did that.

Anyway, it also does appear, to even the most casual observer that, even when she does speak to the press (which is, again - literally her job), she seems to have a hard time speaking truthfully, on behalf of said administration. From June 13th, Vanity Fair piece, “As Sarah Sanders Signs Off, A Look Back At Some Of Her Biggest Lies:

“In fact, it appears that the only known instance of Sanders telling the truth involved a nine-year-old nicknamed “Pickle” writing a letter to the White House about how much he likes Donald Trump. But her track record was so bad that initially, no one believed her.”

Okay, that’s a little snarky - but kind of funny. I mean, I doubt it’s the “only known instance of Sanders telling the truth” but it does illustrate the amount of times Sanders created “alternative facts.” And, here’s a pro tip for life - there is no such thing as an “alternative fact.” The phrase, “alternative fact” just a funny way of saying, “I’m lying my @$$ off” and/or “I have no idea what I’m talking about.”

But, whatever.  It’s not like the new White House press secretary will be more truthful. Hopefully, though, whomever it is - he or she will actually, you know - hold press conferences and “act as spokesperson for the Executive Branch.”

That’s probably wishful thinking on my part but a man can dream, can’t he?