To paraphrase Michael Corleone, "What better consigliore could I have had?" 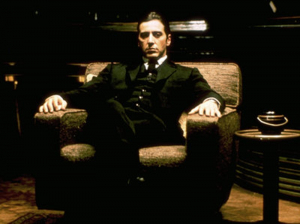 The reason for that is my late father, Philip Weinberg.

He always taught by example, led from the front and encouraged me to act a little like Howard Cosell, telling it like it is and letting the chips fall where they may. So if you wonder why I don’t spout anybody’s party line except my own, it is because he taught me how valuable independence can be.

Included in that lesson was also doing the right thing no matter who you anger.

The older you get, the more that you realize Father’s Day may not just be a ploy by the greeting card manufacturers to sell more cards and retailers to sell more stuff but should just be taken at face value as an opportunity to thank and honor the man who raised you.

This Sunday will be the seventh Father’s Day since his death and those lessons he taught become clearer with every passing year. (Also becoming clearer is that getting old is not for sissies.)

Unlike the late Tim Russert I can never imagine calling my father, “Big Phil.” But he was.

Philip Weinberg’s public title on the day he died in 2012 was Professor Emeritus at Bradley University.

The title barely began to cover his career and his public life.

But growing up in his shadow gave me a perspective on life that many people, for many reasons, will never get.

He rarely lectured my sisters and me. His example was usually enough. He continuously taught by example that this is the United States of America and any little boy or girl could grow up to be President, or publish a newspaper, run a radio network or swing any bat you’re big enough to want to pick up.

He was the living embodiment of the concept that ordinary people can do extraordinary things by simply putting one foot in front of the other and moving forward. If that were all he taught me in 60 years, it would have been plenty. But he also taught me that when you do get where you want to go, grace and humility can take you even farther. And, trust me, that’s a difficult lesson to learn no matter who is trying to teach it.

It is possible—although I’m not sure he would have admitted it—that he learned some or all of these things as he was raising his children and that the Phil Weinberg when he left us was as much the product of having raised three children as those children are the product of having been raised by him and my mother.  It also occurs to me in hindsight that much of what he taught us was as difficult for him to implement as it was for us.

Kids don’t come with operating manuals and my father was an engineer by training. But the lessons he taught—intentionally or otherwise—have become so valuable that I can only hope that I’m capable of passing at least some of them on to my own millennial stepchildren.

As valuable as the lessons, are the memories. I vividly remember standing outside an apartment complex in Brooklyn with him telling me, “Son, there used to be a baseball stadium here and a real baseball team played there.” He never acknowledged that the Dodgers had moved to LA and abandoned Ebbets Field.  And, given the choice between the Dodgers and the Angels when I owned a Las Vegas radio station, I chose the Angels because he would have been horrified had I consorted with dem bums…

I remember him showing me my first mainframe computer in the early 1960s and his precise explanation of how the monster IBM System 360 worked.

I remember coming home one Friday in 1963 to the death of John Kennedy and his explanation that the country is bigger than just one man and things would be just fine because that is the genius of this nation’s founders. And I also remember the summer trips we were able to take so he could graphically illustrate exactly how big this nation is.

He might have missed a few little league games (I never got past the minors in the Richwoods Little League anyway) but he never missed a crisis. You could tell when something was relatively unimportant—he wouldn’t hesitate to yell at you. But when the chips were down, there was nobody you would rather have covering your back. Until almost the day he died, he was the first call I and my sisters made when there was a problem. However difficult the problem was, his calm analysis was always dead on and his advice and support were invaluable.

In the immortal words of Michael Corleone, “what better consigliore can I have than my father?” 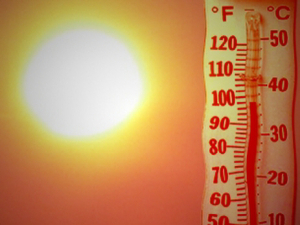 The National Weather Service has issued “excessive heat warnings” for many parts of the Southwest United States.  It’s the first of the season for many states, so don’t be unprepared.

What is an “excessive heat warning?”

This occurs “within 12 hours of the onset of extremely dangerous heat conditions”. This means that the heat index (air temperature and humidity) will be greater than 105 degrees for more than three hours a day for at least two days in a row and the night-time temperatures will not drop below 75 degrees. Although many of us may live in areas where this occurs each year, the onset can be one of the most dangerous times.  Symptoms such as heat cramps, heat exhaustion and heat stroke must be identified.

What are Heat Cramps?

At first when one feels symptoms, it may come in the form of heat cramps. Heat cramps are painful spasms that occur in the muscles of the arms and legs and even abdomen. We believe that when one loses fluids and salts from excessive sweating, cramps ensue. Its important in these cases to get the person out of the heat, hydrate them with sips of fluid and electrolytes and massage the body parts affected.

What is Heat Exhaustion?

If one does not leave the heat and come indoors, the next risky event that can occur is heat exhaustion. This worsens as the victim sweats profusely becoming more and more dehydrated. They could also have cramps but nausea may ensue, they may look pale and clammy and their heart rate will increase to try to compensate for the lost fluid. These individuals may become dizzy, weak and even faint. Immediately bring the person indoors, lie them down, elevate the feet, give sips of fluid, cool down the body applying cool and wet cloths to the underarms and body, and contact medical authorities if symptoms continue or worsen.

What is Heat Stroke?

Heat stroke will occur if a vulnerable person does not get out of the heat in time. It is a medical emergency and can be fatal. If an individual has heat stroke 9-1-1 must be called immediately. Bring the victim indoors away from sunlight, lie them down, remove unnecessary clothing, cool their body with cold compresses and watch for signs of rapidly progressive heat stroke in which they have difficulty breathing, seize or lose consciousness. If they are unconscious you cannot give them fluids. Only if they are alert, awake and able to swallow will you be able to give fluids. Do not give medications to reduce the fever such as aspirin or acetaminophen since their body may not be able to metabolize them properly and this could make matters worse.

Who is vulnerable to heat related illness?

Young children and elderly individuals may have issues adjusting to the outside environment and may be more prone to dehydration. Those with medical conditions such as heart, lung, thyroid disease can be at risk as well. If you’ve ever suffered from heat stroke you can be vulnerable again. And many medications could make you susceptible such as diuretics, vasodilators and beta-blockers for blood pressure and antidepressants. The biggest risk comes when we are unprepared. Having an unusual cool week prior to a heat warning could preclude many from taking proper precautions. Staying indoors, checking air conditioning and fan devices to make sure they work properly, wearing cooler clothing is just the beginning. Stocking up and planning to hydrate frequently is paramount because when death occurs to excessive heat, dehydration is the main culprit.

Bring your pets in doors, and watch your kids, friends and family members frequently. If they are beginning to sucumb to the heat, they may be quiet and not be able to voice it.

Avoid drinking alcohol in the heat. It can dehydrate you more and worsen the situation.

Avoid excessive exercise when outdoors and make sure to make use of shady areas.

The summer and early fall offer exciting and fun ways to enjoy nature. Don’t let the heat get to you. Remember….if you can’t take the heat, get out of the…..well heat…….