She was fired when she was falsely accused of racial profiling 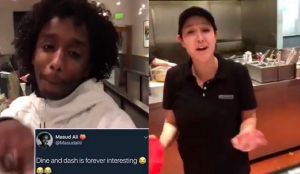 Ah, internet. How I love you, and hate you at the same time. You have done so much right and so much wrong. And this Chipotle disaster is another case of wrong. Let’s set the scene: A few months ago at a Chipotle in St. Paul, MN, five young, black men in their early twenties come into the restaurant and order food. The manager, a twenty three year old woman named Dominique Moran, tells the five black men, “...you gotta pay (up front) because you never have any money when you come in here, boys.” Well, the boys were recording the interaction and, in the following two minute video (linked on the front), you see the boys claim they are being profiled and ask white customers “do you have to pay up front before you get your food?”

This is a fair question. If Moran is only asking black men to pay up front, but not asking white customers the same thing - she’s probably doing something wrong.

Well, the boys left the restaurant and posted their various videos to social medial. At least one video went viral, one shot by Masud Ali, 21 (again, the one linked to the front page). There was an immediate and huge backlash against Moran with many rage comments calling her the “racist white manager,” and at targeting Chipotle itself for being racist and for racial profiling black men. Within 24 hours Chipotle issued an apology, stating: “This is not how we treat our customers and as a result, the manager has been terminated and the restaurant is being retrained to ensure something like this doesn’t happen again.”

Masud Ali, the young man who shot the viral video, hit back on Twitter calling out Chipotle for firing the manager on duty (Moran) but not her “side kick,” saying to them, “Just because you retrain someone doesn’t make them less racist.” Masud, clearly, was trying to get a second employee fired. For being racist. Well, get back to that in a second.

Anyway, as you can imagine - Moran was publicly shamed, lost her job, received thousands of hate messages and her picture & name became synonymous for hate. SJW (social justice warriors) everywhere patted themselves on the back for rooting out another racist.

Now, keep in mind this general story is nothing new. We see weekly videos of white people calling the cops on black folks for literally just eating their dinner, or walking down the street, or playing with their kids on the playground. This is textbook racial profiling and it happens. Basically, what the white folks are saying is “I see a black person - he/she must be doing something illegal!” Or how about the Starbucks incident(s) last year in Philly and L.A. Or, how about this video where a black man is picking up trash on his own property and a white cop doesn’t believe he lives there and pulls his gun on him. So, sadly, the story of “white person racially profiles person of color,” happens. Like, a lot. And it’s a huge problem.

But in this specific instance, well - let’s get back to Moran. Very quickly after her firing, for being a “white racist profiler,” a few internet sleuths saw holes in the official story. First of all, Moran isn’t white. And it’s painfully obvious to anyone watching the video that she’s of some kind of Latino heritage. Not that her racial background is a huge deal, but still. Second, it took internet sleuths all of like, ten minutes to jump onto the social media page of Masud Ali and see post after post from him, bragging on social media how he and his buddies love to dine and dash and have been doing it for years.

Um. Uh-oh. So, what you’re saying is that after the barest minimum of investigation it was super, super easy to figure out that Masud was a lying, serial “dine and dasher” and that Moran was actually protecting her employer from theft. But instead of doing the barest minimum of investigation into the event, Chipotle bent to the will of online hysteria and fired their employee for … protecting the store and doing the right thing.

It’s too bad because this kind of disengenous idiocy pushed by Ali and his A-hole buddy's  - do actual harm to legitimate cases of racial profiling. Not that Ali cared about that. I mean, he might care about it now that he was outed for being a douchebag, but had he not been caught, do you really think Ali would have ever felt a moment of regret for getting an innocent woman fired?

I’m going to go out on a limb and say - he would not have cared at all. Not one bit.

Well, it’s all come full circle now. The internet sleuths pushed evidence back towards Chipotle. Chipotle publicly apologized to Dominique Moran for getting it wrong and offered her job back but … I haven’t been able to find out if she took the job or not. To be honest, I hope she didn’t. I hope she moves on to better things.