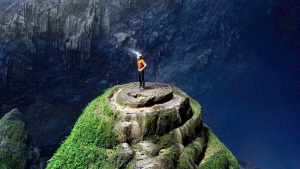 The cave was first discovered in 1991 when a local explorer named Ho Khanh accidentally stumbled across it but, upon his return home, was no able to pinpoint exactly where the cave entrance had been. It took him almost 20 years to find it again but by then, and just about at the same time - the cave had been discovered by British cavers in 2009.

The cave itself, according to experts, is approximately 3.5 million years old - created by “... river water eroding away the limestone underneath the mountain where the limestone was weak - then having the ceiling collapse creating huge skylights. At over 5 km long, with sections reaching up to 200m tall and 150m wide, Hang Son Doong is large enough to house an entire New York City block, complete with 40 story skyscrapers. With a total measured volume of 38.5 million cubic meters, this comfortably surpasses Deer Cave in Malaysia, which was considered to be the previous record holder. Stalagmites up to 80m high have also been surveyed, the tallest ever encountered.”

And just last month, British divers (the same divers who aided in the rescue effort of the trapped soccer team in Thailand) uncovered something about Son Doong that had gone previously unnoticed - an underwater tunnel. This tunnel, it seems, connects Son Doong to another huge cave called, Hang Thung, adding an additional 1.6 million cubic meters in volume to Son Dong’s already colossal 38.5 million cubic meters.

More about the expedition can be found here at the official website for the British explorers. (Editor’s note: The movie on their website is the same five minute movie linked on our front page but you should check out the page anyway, for the photos!)