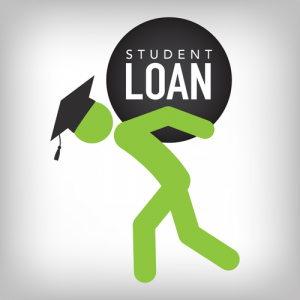 Oddly, some seem to blame “capitalism” for the student loan predicament. Ray Dalio, billionaire investor, cited massive student debt loads in a recent article that made the case for reforming capitalism. Presidential Candidate John Hickenlooper penned an op-ed for the Wall Street Journal boldly proclaiming he is running for president to save capitalism. The very first point in his argument is that (public) high school education doesn’t provide adequate training for the modern economy. Anecdotally, we have heard the federal student loan predicament conflated with capitalism.

The Hardship Is Real

The pain of student debt is real. Sadly, there are many adults burdened by thousands of dollars in loan debt. Khalilah Beecham-Watkins, a first-generation college student and young mom, is one of many who feels as if they’re a prisoner to student loan debt. Khalilah has been working to pay down her $80,000 debt while helping her husband tackle his own loan obligations. In an interview last year, she said, “I feel like I’m drowning.”

As is well-reported, many young adults feel like Khalilah. In the United States, the average student loan debt is more than $37,000. As unsettling as that figure is, some graduates face even higher debt loads. About five percent of degree earners have student loan debt totaling $100,000 or more. Stories like Khalilah’s need to be told so that students don’t flippantly take on crushing debt without recognizing the gravity of such a decision.

This significant debt load is exacerbated by the fact that many graduates are finding it difficult to find well-paying jobs, which has spiraled into incredibly high rates of loan delinquency: More than one out of every 10 loan recipients is unable to keep up with payments. The Brookings Institute estimates that nearly 40 percent of borrowers will default by 2023. These are sobering statistics, and it’s important that borrowers be fully aware of the risks and benefits associated with debt of all kinds, including student loans.

The Benefits of Investing in a College Degree

Despite the burden that comes with debt, there are undeniable long-term benefits to earning a degree. In our skills-based economy, it is no surprise that a person with a bachelor’s degree will earn significantly more than a person with only a high school diploma. It has been estimated that a bachelor’s degree increases a person’s average lifetime earnings by $2.8 million.

And the more degrees someone holds, the more their earning potential increases. Studies indicate that earning a graduate degree could triple a person’s expected income. But in the near-term, the financial stress of loan delinquency, deferred consumption, and lower net worth is real.

While the buck ultimately stops with each of us when it comes to our own financial decisions, the student loan quagmire is chiefly the product of federal policy. Federal laws prohibiting sound commercial lending practices and states setting tuition rates high enough to guarantee they’re able to absorb all the federal money they can are complicit in this widespread problem.

Rather than addressing the underlying problems of federal financial aid and rising public college tuition, politicians like Senators Elizabeth Warren or Bernie Sanders are offering politically expedient ideas. Sen. Warren proposes debt cancellation of up to $50,000 to more than 42 million people.

Sen. Warren’s plan would eliminate debt for 75% of borrowers with student loans, and federal funding to ensure students attend state college for free. But nothing in life is free. Warren’s sleight-of-hand doesn’t make existing debt or future tuition magically disappear. Rather those costs are passed on to taxpayers. And since college graduates earn roughly twice as much as high school graduates and can expect to be in higher tax brackets, guess who would be paying the taxes for Sen. Warren’s plan.

To understand the federal student loan mess, it is necessary to understand some details about the loans that are at the center of the issue. The federal government provides a few types of loans, but the largest share of student debt comes from subsidized and unsubsidized federal loans.

In the case of a subsidized loan, the Department of Education pays the interest on the loan while the student is in school and for six months thereafter. A student can qualify for this type of loan whether or not they are creditworthy or have the ability to repay the loan.

In typical commercial lending, a bank would not offer a loan to an individual who didn’t hold a reasonable promise of being able and willing to repay it. This harkens back to 2008 when the US housing market collapsed because of irresponsible lending practices and the belief that everyone—no matter their financial situation—should own a home. It should be no surprise, then, that some economists predict a similar implosion of the student loan market. In other contexts, this would be called predatory lending.

The State’s Role in Tuition Inflation

The second contributor to these financial aid troubles is ballooning state college tuition rates. State legislatures and state institutions set public college rates, so these state officials should be held accountable to provide lower-cost alternatives. One lower-cost alternative to traditional on-campus programs would be to offer a basic skills-based college curriculum online at-cost, i.e., based on the marginal cost of providing downloadable lecture videos and similar programming.

While the total cost to a student of an online degree currently tends to be less than a traditional degree, the tuition is often the same. By offering video of select classes, schools could unlock the value of their existing educational resources and expand access to more students. However, state schools are largely immune from market discipline, which encourages cost-cutting and leveraging economies of scale. Instead of reducing operating costs and tuition prices, state schools soak up the flow of federal loan dollars.

On the finance side, state universities could offer their own alternative to federal student loans. Take, for instance, the market-oriented model of Purdue University and offer income sharing agreements (ISAs). Income sharing agreements allow consumers to pay off a debt by sharing a portion of the student’s income with the lender for a set number of years. Instead of a loan, ISAs allow investors to take “equity” in a student’s future earnings for a period of time.

The problem with the financial aid predicament is that market discipline has been eliminated from state college education and federal financial aid. Public colleges aren’t going to be privatized and run like for-profit businesses any time soon. However, by applying market-based innovations and lessons from the private sector to state colleges, it may be possible to expand access to state college, offer alternative financing arrangements (like income sharing agreements), and reduce the cost of college through technology and economies of scale.

Doug McCullough is Director of Lone Star Policy Institute. Brooke Medina is communications director at Civitas Institute in NC. Their opinions are their own. This article originally appeared on fee.org. Reptrinted in full, with permission.

Want to end a trade war before it begins? Buy less cheap Chinese crap from Walmart!

I have a question for those screamers who claim to be students of the Chicago School of Economics. Or have a gig at one of the business television networks.

What part of the Bill of Rights says “Congress shall make no law or allow no tariff abridging the right of citizens to gather at Walmart and buy cheap Chinese crap”?

To listen to most of the folks on CNBC, Fox Business and Bloomberg, you’d think they replaced the Second Amendment with that.

I’ve been in business, negotiating deals, for most of my adult life.  A bad deal is when you memorialize being taken advantage of.  A good deal is when all parties to the deal get something they want.

Our trade deal— from the beginning of modern time to date—with China can generously be called a bad deal.

Apparently we want the cheapest flat screen television sets so badly we’re willing to give up our rights to sell stuff in China to get them.  And if President Trump thinks that’s a bad deal and wants to impose tariffs to correct it, the companies importing and selling those sets scream that the American consumer is going to take a beating.  As opposed to the American worker, who of course, are one and the same.

Then, when it all is sorted out by the Wall Street Journal, that beating appears to be about $800 a year per family.  And, keep in mind that the Journal is also populated by many of the same screamers on TV.

The big weekend story was that Apple could be hurt because most of its products are assembled in China.

As an iPhone user (in fact, I use just about every Apple product except the Mac) my humble suggestion to Apple CEO Tim Cook would be build your products in, say, Viet Nam or, here’s a real idea: how about Minnesota, down the street from where Mike Lindell makes My Pillows?  No matter how much you say the words multi-national, living in Cupertino has to be nicer and more efficient than Beijing.

At some point you have to realize that the word “nationalism” is not a four letter word.

Steve Jobs and Bill Gates started their companies because you can do that in the United States.  They expanded to markets like China in a search for new markets.

And, let me tell you a little about our “friends” in China.  They owe me and millions of other Americans millions of dollars in defaulted bonds which their government doesn’t want to pay.  Those bonds were issued before China became Red China and many of us either bought them or inherited them.  (You can read about that at the American Bondholders Foundationhttp://www.americanbondholdersfoundation.com)  They were sold by Wall Street firms who today are still selling Chinese debt.

So, I’m not very sympathetic to the words “trade war” because I doubt that the Chinese have the economic muscle to cause us much pain—not nearly as much as the folks on business TV would like us to believe.

Simply put, President Trump is right and these guys are wrong.  After all, God, it is said, invented Economists to make Astrologers look good.

And if it costs us $800 a year per family—or even significantly more—to make that point to the leaders of Red China, buy less cheap Chinese crap and more stuff made in America.  It will strengthen our hand and, in the long term, make our lives better.

To say that none of this is worth taking strong steps like tariffs is exactly like the Democrat House saying that there’s no crisis on the border.

They will learn soon enough.

In the meantime, while they are dancing, pay attention to Kudlow’s observation about that, “Some of the Chinese officials have said the agreement was too unbalanced.  No.  The relationship has been too unbalanced and because of these problems of unfair and sometimes unlawful trading practice, we have to have a very strong agreement to correct, to right, these wrongs before we would be satisfied.”