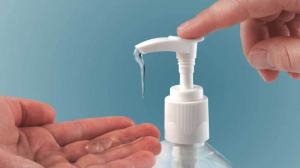 Most of us squirt one pump of hand sanitizer, slap it together in our palms and then dry the rest off on our pants.  But researchers say there is a protocol and choreography that must be performed in order to prevent the spread of millions of pathogens that could be lurking on our hands.

The World Health Organization recommends the following steps to be taken when using hand sanitizer:

The process takes about 30 seconds.  However, in a study released this week, researchers from the University Hospital Basel found that if all steps were taken but performed in 15 seconds, the same results will be obtained.  However, if fewer steps were taken, more bacteria/viruses/pathogens will remain on the hands.

For those who have eczema or sensitive skin, they may not tolerate the alcohol based hand sanitizers and should use soap and water instead.

Instead Of #notmypresident, how about #limitedgovernment?

Jack hates Trump. Jill hated Obama. And thus, Jack and Jill now cannot stand each other. This is today’s America, where lines are drawn and the population is bifurcated. We are somehow losing our love for each other, sharing common bonds of freedom as a nation. Is it because of the polarizing nature of Trump? Or Obama? No. Our collective angst has been misdirected towards the wrong culprit—the ire belongs with the unfettered growth of the power of government over our lives.

Would Jack hate Trump as much if the government was vastly less impactful on his life? Of course not. The emotional highs and lows of 2016 were extreme. We hear ad nauseum that every election is the most important of our lifetime. This last one, though, should have been no more extraordinary than any other. Sadly for our mental, emotional, and financial well-being, each election becomes progressively more polarizing, and more anger-inspiring—at least on one side. The reason is simple: the government becomes incrementally more gargantuan.

Our elections are analogous because we are trapped in a scenario in which it seems impossible to behave rationally and have a positive outcome for all, or even most. Presume we live in a roughly 50-50 country, where people are split down the middle. After an election, half of the people are ecstatic, half the people are devastated, and all of the people can barely stand each other. There is, however, a way to solve the dilemma problem. It is a solution in which both sides are at least better off: limited government.

Our federal government is a behemoth. The fiscal year 2019 budget stands at $4.5 trillion, which is 21.3 percent of GDP. The current federal debt, on paper, exceeds $22 trillion and has grown on average nearly a trillion dollars a year over the last decade. Off the balance sheet, the unfunded liabilities could add at least another $50 trillion, depending on how it is estimated. The federal government employs approximately 2 million people.

There are 15 executive departments, and the number of agencies depends on who is counting, and how. As citizens, we experience an ever-growing expanse of government, impacting virtually every aspect of our lives. Thus, elections become commensurately impactful. Those who win elections direct this bloated mass of resources and power in a manner which the losing party inevitably finds antithetical.

Of course, emotions are not some mathematical game theory problem. The results are real and impactful. They have become rather binary, and we have become vastly forked along political lines. But there is a correlation in our prisoner’s dilemma puzzle between the severity of outcome and the power of the government. The less impactful government is on our lives, the less a binary election matters. The more impactful government is in one’s life, the more extreme the results of an election will be. Is everyone willing to simply flip a coin to be extremely happy or extremely bitter? That is where we currently stand.

Perhaps, instead, we can limit government. By reducing the magnitude of government, we can move our country to the point where elections are vastly less impactful on our well-being. We can reduce the animosity we currently have for each other, and instead bask in the glow of the freedoms we have been bestowed. Government has a natural tendency to metastasize. It is our duty as citizens to curtail that.

Dave Sukoff is an advisor to the investment management community and previously co-founded and ran a $500m fixed income relative value fund. He is also the co-founder of a software company and inventor on multiple patents. Dave graduated from MIT, where he majored in finance and economics.  This piece appeared on pennypressnv, reprinted in full with permission.