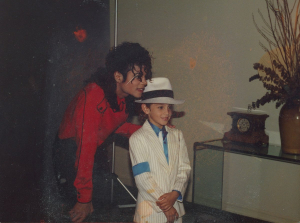 Okay. As a huge Michael Jackson fan I did not want to watch Leaving Neverland, the HBO documentary detailing MJ during the height of his stardom and his relationship with two boys, aged 7 and 10 (now in their 30s), and their story of how MJ sexually abused them. I mean, I was always on the fence with MJ's guilt. I’m sure that over the years, I defended him in conversations, even though I had my doubt.

I grew up in the 80’s and MJ was THE super star of my generation. Everyone loved him. I mean, don’t get me wrong, there was always a kid or two that was like, “I hate Michael Jackson” but, whatever. No they didn't.

In fact, one of the hardest decisions my 9 year old self ever had to make was this: It was Friday night and there were two things on TV at the same time that I desperately needed to watch.

The first: Doctor Who: The Key to Time Part (something)  Dude, you may not care about Doctor Who but for me, as a nine year old kid - Doctor Who was the everything!  I can’t remember exactly which episode of Key to Time was going to be on, but I know that it aired at 10pm and went until midnight. On Friday.

The second: Friday Night Videos. Which, from memory was on from 10:30 to 11:30pm. And, you know what video was going to be the featured? Thriller! For the first time, ever!

I watched Doctor Who. Which, come Monday morning at school, turned out to be huge mistake because everyone else had seen Thriller and I was suddenly the uncool kid, and the only kid in class - who had not seen it. Which, is a big deal when you’re nine.

Moving forward, personally, I think Bad is actually a more consistent album than Thriller, and Smooth Criminal is the greatest dance video ever produced and probably my favorite MJ song. I bought MJ’s early 90s album, Dangerous, but by then the magic was fading. I never bought HIStory and never even heard much of his music after that because by then we were neck deep in “Wacko Jacko” stories and abuse allegation trials. And, even if their wasn’t actual abuse, which is what I believed at the time - Jackson was f**king weird, man! He did himself no favors by … ummm … admitting to sleeping in the same bed with lots of children. For many years. At his private ranch. While the parents of the kids where at a completely separate part of the ranch. And MJ had alarms on his doors & hallways so no one would be able to sneak up on his bedroom unnoticed - where he was alone with the children. In bed. But, um, nothing happened (says Jackson.)

And a lot of us … kind of believed it. I mean, the idea that MJ, who’s public persona was nothing more than a grown up kid himself, actually molested children was difficult to believe. But now, in 2019, the very thought that I didn’t believe the allegations against him feels pretty damn naïve. But at the time, I mean, he was weird and he was rich - which makes him an easy target. And just because he’s weird and rich doesn’t mean he’s evil. And besides, I like his music and his dancing is awesome. Therefore - he probably isn’t guilty. Right? (And "probably" was good enough for me.)

Shortly after his death (in 2009), I read about a couple of the police officers that had collected evidence in the 90's Jackson child abuse allegations. And while they were under a gag order and were unable to discuss specifics, both of the officers said something that struck me, which was to the effect of, “I make sure no one, and I mean no one in my house, or family - listens to Michael Jackson. Ever.”

Hmmm. Reading between the lines there, it sounds as if the officers involved in collecting evidence from Neverland Ranch were so disturbed by said collected evidence against M.J. - that they refused to let anyone in their family ever listen to his music.

To me, that suggested - something. Not everything, yet ...  but something. But still, at the time, had you asked me if I was 100% certain of MJs guilt I probably would have made excuses defending him, but then at the end of the conversation would have said, “But I don’t know, I wasn’t there. So … maybe he’s guilty.”

Back to the fact that I really didn’t want to watch Leaving Neverland. You know why? Because it’s pretty damn clear I always suspected in my heart that my childhood idol was guilty of pedophilia and I just didn’t want to hear proof. Which is a sad admission, but there it is. Also, I suspect many, many people feel/felt this way.

And so, I watched it.

Holy God. The documentary is as horrifying as you’ve heard. Part 1 details the allegations, which are stunning. Part 2 deals with family trauma, which is heartbreaking. And it's true that the documentary doesn’t offer “proof,” per say (for example - video of the abuse), it does; however, offer two extremely believable, sincere testimonials from James Safechuck and Wade Robson, both of whom accused MJ of sexually molesting them for many years when they were young, Wade as early as seven years old. Seven years old! And the documentary does not make any case that MJ doesn’t know what he is doing. In fact, it suggests the exact opposite in that MJ is a totally self aware f**king monster. The grooming. The planning. The lying. The seducing. The gifts. Getting the kids to lie for you. Just about everything we know about child molesters is there and it was probably always there, and most of us ignored it - because Michael Jackson is awesome!

Corey Feldman and Macaulay Culkin, MJ's two famous childhood actor friends, have both repeatedly said that MJ never did anything inappropriate to them which, I actually beleive because they were both famous child actors at the time. Pedophiles target kids with no power. Feldman and Culkin had, at least a modicum amount of power which is probably why MJ didn't target them. Culkin, as far as I am aware, has yet to comment on the documentary, but Feldman pushed back calling it “one sided” and criticized the film because MJ has no chance to defend himself.  But, that's not exactly true, is it? I mean, MJ had every chance to defend himself when he was alive and in fact, he did so because there were acusations and trials. It occurred to me that we’ve only heard MJ’s side of the story - over and over and over - that he's innocent, he would never hurt kids, the alleged "victims" were out for money and that the media lied about him because he's rich and weird. That's the story we've been told. Leaving Neverland is actually, the first time we’ve ever heard from any of the alleged victims. So, I kind of feel like, while it's true we don't have "proof" that MJ is guilty or innocent - we've heard his side of things - that he's an altruistic angel and does nothing wrong and is the target of a smear campaign. And now we've finally heard from two of the alleged victims. And they are very, very compelling.

“I cannot in good consciousness defend anyone who’s being accused of such horrendous crimes, but at the same time, I’m also not here to judge him, because, again, he didn’t do those things to me and that was not my experience …  It comes to a point where, as an advocate for victims, as an advocate for changing the statutes of limitations to make sure that victims’ voices are heard, it becomes impossible for me to stay virtuous and not at least consider what’s being said and not listen to what the victims are saying … As I’m watching it [the Leaving Neverland documentary], I’m going, ‘This doesn’t make sense to me. This isn’t the guy that I knew. But look, I’m a guy that at 14 years old was molested, did have a pedophile completely lie to me about who he was. I trusted him. I believed in him as a friend, and I thought he was a good person, and then he molested me. It all proves that I’m not the best judge, and that’s why I shouldn’t be the judge in this situation, and especially given the fact that I’m so close to [Jackson].”

Jackson still has his defenders. He always will. I used to be one of them. Not so much any longer. I mean, MJ was weird and rich and was an easy target and his estate is worth … God only knows … a couple of billion dollars? That, right there, is motive. So, I feel that I really understand all the reasons people don’t want to believe that, Michael Jackson, the best selling recording artist of all time - is a pedophile. I really do understand the reasons for doubt, but - I no longer believe any of them.