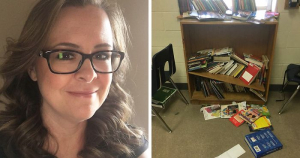 Before I get to the teacher in question, I want to talk education for a minute. It's been written many times that U.S. students are, well - not number one. They are not number one in math, not number one in science and not number one in reading/writing. In fact, they are far from number one. The World Education Ranking system ranks, as you can guess - education in the world. The U.S. has never been number one. Ever.  In 2016 U.S. kids had their best showing since the 70’s and placed 7th, but in 2017 dropped to 20th and last year (2018) - the U.S. dropped off the list entirely.

Well, let’s take a look. There is a test called the PISA (Program for International Students Assessment) and it’s a worldwide exam administered approx. every three years to 15 year old's in 72 countries. About half a million students take the exam. The test results are compiled by the OECD (Organization for Economic Cooperation and Development). Their most recent test was in 2015.

Out of 72 countries tested:

U.S. kids ranked 40th in math with a score that puts U.S. teens 11 spots lower than the average score.

U.S. kids ranked 24th in reading comprehension with a score that puts U.S. teens 4 spots higher than the average score.

U.S. kids ranked 25th in science with a score that puts U.S. teens 4 spots higher than the average score.

Not exactly “‘We’re number one!” And, sadly, according to those 17'-18'World Education Ranking numbers I posted above, it looks like U.S. kids are dropping further down the list.

Well, I don’t really know and I’m not going to speculate much; however, I find it interesting to hear how much self confidence U.S. kids seem to have vs. how they actually perform.  Keep in mind, just because I’m not going to speculate doesn’t mean that other folks won’t speculate. Hell, everyone seems to have all the answers these days, you know? Just check social media where everyone is certain their all caps FB post is clearly the one and only way you MUST think or they’ll unfriend you.

It seems as if parents blame teachers. Teachers blame parents. Republicans blame teachers. Democrats blame the system. Education administrators don’t seem to blame teachers, but they certainly bail out on protecting teachers when irate parents come screaming or, God forbid - someone on a sports team is failing! “You can’t fail our basketball/baseball/football star!”

Yes, yes teachers can and should be able to fail students up to and including athletes. It is the teacher's exact job to evaluate if a child has done the work to pass, or not. If kids are terrible s#!t heads and parents are ignoring email, after phone call after text message saying, “Hey - your kid is a bully, hasn’t turned in 10 of his assignments this year and I might have to fail him! Please respond!” Well, if parents don’t take a vested interest in their own child’s education and their kid acts a damn fool and never does his/her school work - that kid deserves consequences. Just sayin.

And that’s exactly how Julie Marburger felt. Marburger is a sixth grade teacher at Cedar Creek Intermediate School in Texas. She was worn down by the chaotic destructive students and the irate road raging parents. And so, just before she quit, she wrote an epic FB post blasting them all. The rant went viral and within two weeks had millions of hits. (Editor’s note: It doesn’t appear as if she quit. She expected to receive hatred for her post and thought she would have to quit as a result but instead of recieving negative press she has received overwhelming support and it sounds as if the support has stayed her hand from quitting, as of yet).

Marburger’s view is that parents and children have become awful, abusive, entitled pricks. The kids don’t seem to care about consequences and parents lose their minds if their Precious Angel doesn’t get an A. It doesn’t matter if Precious Angel destroys school property, turns in zero work assignments and verbally abuses teachers and/or students because parents will still demand that Precious Angel recieve an A!  After two years of, as Marburger describes it - abuse, she finally had enough and called parents and students out for their behavior.

“I left work early today after an incident with a parent left me unable emotionally to continue for the day. I have already made the decision to leave teaching at the end of this year, and today, I don’t know if I will make it even that long. Parents have become far too disrespectful, and their children are even worse. Administration always seems to err on the side of keeping the parent happy, which leaves me with no way to do the job I was hired to do ... teach kids.

I am including photos that I took in my classroom over the past two days. This is how my classroom regularly looks after my students spend all day there. Keep in mind that many of the items damaged or destroyed by my students are my personal possessions or I purchased myself, because I have NO classroom budget. I have finally had enough of the disregard for personal and school property and am drawing a line in the sand on a myriad of behaviors that I am through tolerating. Unfortunately, one parent today thought it was wrong of me to hold her son accountable for his behavior and decided to very rudely tell me so, in front of her son.

Report cards come out later this week, and I have nearly half of my students failing due to multiple (8-10) missing assignments. Most of these students and their parents haven’t seemed to care about this over the past three months, though weekly reports go out, emails have been sent and phone calls have been attempted.

But now I’m probably going to spend my entire week next week fielding calls and emails from irate parents, wanting to know why I failed their kid. My administrator will demand an explanation of why I let so many fail without giving them support, even though I’ve done practically everything short of doing the work for them. And behavior in my class will deteriorate even more. I am expecting this, because it is what has happened at the end of every other term thus far.

I have never heard of a profession where people put so much of their heart and soul into their job, taking time and resources from their home and family, and getting paid such an insultingly measly amount. Teachers are some of the most kind and giving people I have ever met, yet they get treated so disrespectfully from all sides. Most parents can’t stand to spend more than a couple hours a day with their kid, but we spend 8 with yours and 140 others just like him. Is it too much to ask for a little common courtesy and civil conversation.

It has been a dream of mine for as long as I can remember to have a classroom of my own, and now my heart is broken to have become so disillusioned in these short two years. This is almost all i hear from other teachers as well, and they are leaving the profession in droves. There is going to be a teacher crisis in this country before too many more years has passed unless they abuse of teachers stops.

People absolutely HAVE to stop coddling and enabling their children. It’s a problem that’s going to spread through our society like wildfire. It’s not fair to society, and more importantly, is not fair to the children to teach them this is okay. It will not serve them towards a successful and happy life.

Many will say I shouldn’t be posting such things on social media ... that I should promote education and be positive. But I don’t care anymore. Any passion for this work I once had has been wrung completely out of me. Maybe I can be the voice of reason. THIS HAS TO STOP”