Opinion: Mass shootings are common enough that I have a hard time remembering massacres from only a couple years ago (and that makes me really sad) 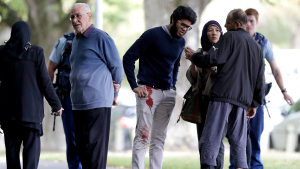 Another white supremacist right-wing terrorist commits mass murder. I’m sure you’ve heard all about it. I’m not going to talk much about gun control because you already know where you stand on that issue. I’m not going to even talk about the actual massacre because you’ve probably heard all about it and, honestly, I doubt I have anything new to say. I do want to talk about the fact that I wish I was more shocked. I mean, do you actually remember a time when it would be shocking to hear about any kind of massacre? I certainly do, and I honestly feel like it was decades ago. Now, I just wait for it to happen, knowing it will.

Remember back in 2011 when a white supremacist right-wing terrorist massacred 79 people in Norway? I hope you do, because I actually forgot all about it. I seriously did. This morning I read Huffpost’s really excellent: Mass Shooters Have Exploited the Internet For Years. New Zealand Took It To A New Level. (No, seriously, it’s great, you should take a few minutes to read it because they accurately point out some of the social problems that lead to mass shootings). Somewhere within the Huffpost story, the writers mention the 2011 attack in Norway that killed seven nine people, and I immediately thought, “Attack on Norway? Jesus, I don’t even remember that one.” I had to look it up. It took me a few moments of reading to recall the details. And then I thought, “Oh, I think there's a Netflix movie about it that just came out a few months ago - maybe I should watch it.” Sadly, my thoughts were not “What a horrible, f**king thing to have happened!” Nope. My thoughts were, “Don’t remember it. Oh, right, now I remember it. I should watch the movie.” =(

I mean, there are plenty of mass shootings I do remember. Without looking anything up: Vegas. The Ariana Grande concert in the UK (I think this was a bomb and not a shooting, or maybe it was both, or maybe I’m mixing up concert attacks). The FL nightclub massacre. Columbine. Virginia Tech. Sandy Hook. The Synagogue attack in … um, I can’t recall which city (and I even wrote about that attack). The attack on the movie theater where viewers were watching Batman, but I don’t remember the name of the theater chain or the city it happened. Multiple attacks on black folks while they’re in church. Multiple attacks in Paris within the last five years. The Kenya school attack. The Australian massacre in Port Arthur and I only remember this one because of the Jim Jefferies stand up routine about the attack and his views on gun control (which, is a pretty good routine). The Amish school shooting in … actually, I don’t remember where. Those are the ones I remember off the top of my head and there are clearly important details that I just can't recall - like the horrible massacre in Norway where 79 people died! Five years from now, after another couple dozen mass shootings have occurred, I wonder which of the above I will have forgotten?

Obviously the point being that mass shootings happen often enough that I no longer even remember some of them. I don’t claim to have a solution; however, I do see a few things in common with modern day massacres.

And there we have our game of Clue: The modern day massacre edition! Pick a mass shooting and ask -  who did it? Oh, I know! I know! Is it ”the crippling insecure white male right-wing extremist, in the city, with a semi-automatic weapon?”  (Well, not 100% of the time but, close enough).

Hey, how about this for a new law - men are banned from owning and operating guns! No, that's illegal. Let's remember the Second Amendment here so, oh, I know! Men can own, like, a flintlock rifle or a blunderbuss, or something as equally inefficient in the modern world - but women are allowed to own Uzi's and 9mm semi-automatic pistols! That would probably cut down on mass shootings. =)

But I hope not. I hope someone, somewhere has a solution. And I hope it comes sooner, rather than later. Until then, I will cynically just wait for the next mass shooting to happen. I’ll probably post a bitter story about that one too - "full of sound and fury, signifying nothing."