Gene's Technology Corner: To upgrade, or not to upgrade ... (that is the question) 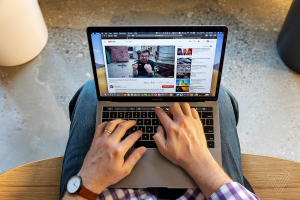 SECOND TIME IS A…

Unlike my previous columns, this article has taken more than a month to write. But it’s not because of fine-tuning the prose. It’s more about events that hadn’t yet reached a successful conclusion.

But let me start at the beginning…

Once upon a time, I would buy a brand new Mac every other year or so. Beginning in the mid-1990s, I added a PowerBook to the mix. In order to help finance the purchase, I would routinely sell my old hardware, and even in the dog days of Apple’s existence, they held their value pretty well.

That was then, this is now. I no longer see the value in upgrading so frequently. Most of the time, the new model is only slightly different — and slightly faster — than its predecessor. I also think of all the money I save by keeping 2010 17-inch MacBook Pro and a 2014 27-inch Retina iMac. When I had a weekly tech radio show, I was even able to trade out radio spots for a new Mac.

These days, I’d have to pay full price (or seek out a small discount), and I’ve grown to appreciate the longevity of Apple gear. Indeed one of the factors hurting sales these days is that people prefer to hang onto their existing devices far longer. So once upon a time, it was common for many people to upgrade to a new smartphone after two years, particularly in the U.S. This was the duration of the usual carrier subsidized deal, after which you could start all over again.

But even after you paid off the device, if you didn’t acquire a new one from the carrier, you’d still pay the same amount. Not such a good deal!

Now customers do buy their gear outright, so there is no compelling reason to replace it so long as it continues to operate. Indeed, with the end of subsidy deals in the U.S., largely because of T-Mobile’s “Un-Carrier” promotion that started in 2013, there are other ways to acquire your device without a big upfront payment. Indeed, some of those plans, such as AT&T Next, allow you to upgrade every year or every two years; you just have to return the old unit after receiving its replacement. Oh, and, typical of leases, you pay the sales tax up front for your fancy new iPhone.

Despite the alternative facts spewed by some cyberbullies, I do not continue to boast about all the brand new gadgets I have. As I wrote in the last issue, my wife has an iPhone 6S, circa 2015, and an iPad Air 2, circa 2014. She isn’t asking about the new models even though she’s not so pleased with the sound quality of her iPad’s speakers..

As you probably know, my MacBook Pro is stuck with maOS High Sierra, 13.3. Fitted with a 500GB SSD some years ago, it is fast enough in handling files, but its Geekbench scores are about a third of what current models can deliver.

It doesn’t sound very promising, but it does get the job done, since so much activity on your Mac is drive-related. Well, such actions as converting an AIFF audio file to MP3 take twice as long as on my iMac, but that’s still acceptable.

But I had to use it as my sole computer for a week recently when the iMac’s hard drive failed. It wasn’t a hard failure at first, just random bouts of spinning cursors, and some performance glitches. But one day, after a restart, it never made it past the startup process.

I couldn’t even get it to start from an external clone backup drive, because the system froze trying to load the internal disk. Apple’s built-in hardware test, however, reported that everything was working, but it’s nowhere near as comprehensive as an Apple repair person would run. I still suspected the hard drive.

After nearly five years of heavy use, it made perfect sense.

Now the current iMac form factor, which debuted in 2012, is, as many of you know, extremely hostile to home tinkerers. While RAM upgrades are quick, replacing anything else inside requires removing the display. The prior version required suction cups and care, but it was a workable process. But in its endless quest for thinner, at least at the edges, Apple’s designers opted to seal the display to the chassis with adhesive strips.

Yes, it’s possible to remove it, and you can even buy new adhesive to seal the unit, but enough was enough. Knowing I’d have to pay the piper for this one, I redirected some cash for less-urgent bills. I took the iMac to an Apple Genius at the nearest Apple Store, located in the Santan Village shopping center in Gilbert, AZ.

The “Genius” ran a more extended hardware test, and it came out OK, but he then ran a test that exercised the hard drive. Within a few minutes, the truth was displayed on the screen. Yes, the drive had failed.

Since it was part of a Fusion drive configuration, the hard drive was maybe twice as expensive as a plain old internal drive. But it was still much cheaper than an internal SSD of similar size. Performance would be noticeably faster than the Fusion Drive, which uses a small SSD for the system and frequently used apps and documents, and the hard drive for the rest. Unless you work with positively huge files, it’s good enough.

I told the Genius that I needed to think about my options for a few minutes, so he went to serve another customer while I pondered my situation. I contacted two authorized independent dealers to get a quote, figuring it should be cheaper.

But it wasn’t, by a long shot. Labor charges were between $125-$150, depending on whether the replacement adhesive strips were part of the price. But Apple exacts a flat rate of $79 plus parts. No wonder independent service shops are complaining.

So you can see which choice I made.

Unfortunately, I had to wait a week for the repair. The store didn’t have replacement drives in stock, and had to order one. They were able to check the inventories of other dealers, and the nearest one that had them in stock was located in Tucson, over 100 miles away. And Apple evidently doesn’t exchange parts with other dealers, well at least one that far away, so I gave the go ahead.

Since I haven’t done much traveling in the last few years, that MacBook Pro hadn’t been used very much. When arriving at the home office, I took it out, and plugged in the accessories that I used on the iMac, including the clone drive. I didn’t connect the Time Machine backup drive, because I wanted to keep the files intact when restoring the repaired iMac.

I also had to download and install the last updates to High Sierra, and then install some apps.

Fortunately, most of the ones I use, including Audio Hijack, were fully compatible with 10.13.

The one good sign: The Levelator, a key utility I use for post-production, actually ran perfectly. On my iMac, running macOS Catalina, I had to run it from a Parallels Desktop Windows installation.

Overall, it took a few hours to fine-tune the setup for my workflow. I was able to manage with the smaller display and fuzzier text; the Retina MacBook Pro didn’t arrive until 2012.

After a week, and on schedule, Apple called me to tell me my iMac was ready. The unit was give an extensive test after the installation, and passed with flying colors. They also cleaned up the smudges on the screen, and vacuumed the dust from the interior. Per my request, the new drive came with Catalina preinstalled. Since I had multiple backups, it wasn’t necessary for Apple to waste time attempting to recover data from the broken drive.

Aside from the differences in the port layout between this iMac and the latest model, it otherwise looked identical.

With fingers crossed, I ran through the startup, and selected a Time Machine backup to transfer my files. It may just be that the external 2TB Toshiba drive was very slow, but it took nearly 10 hours to migrate my stuff.

For a few days, everything was all right, until a similar problem appeared. I was able to restart, but it ran dog slow.

So it was back to the Genius Bar on a rush basis. But rush to them meant a nearly one-hour wait since no appointments were available until the following day.

This time the diagnosis runs reported a defective SATA cable, so I turned it in for repair.

My request for a “rush repair” reduced the wait time by two days; so much for rushing. When I was notified that the iMac was ready to pick up, the repair person who called told me that they also had to replace the other half of the Fusion drive, the flash drive, in addition to the cable. Well at least they didn’t charge me for labor.

Yes, I did ask the obvious question: Is it possible that the entire problem was caused by the failure of the cable and the flash drive, that there was nothing wrong with the hard drive?  They insisted it wasn’t. Even more curious is the fact that my iMac was supposedly given a thorough test after the first repair, and no problems appeared.

But the excitement didn’t end there. When I got my iMac back, I discovered that they had it loaded with macOS Mojave, against my instructions to use Catalina. As a precaution, I wiped the drive, and used the Internet Recovery feature to get the latest version of Catalina to install, after which I restored my data from a cloned hard drive.

When I called to complain, the repair people gave me some gibberish as to why they felt I was running Mohave. They got it right on the first repair, so I assume they just screwed up but wouldn’t admit it.

So far, my iMac appears to be working normally, but I not happy with Apple. There is no excuse for their failures to get it right the firsts time. It’s not that defective storage devices should be difficult to diagnose. All told, I lost use of my iMac for 12 days between two repairs, and spent hours more doing my own troubleshooting before bringing it in for Apple to each repair.

Now that the storage system is brand new, I hope I’ll be free of hardware problems for another couple of years. Wish me luck.