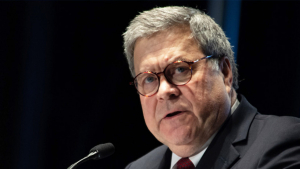 From the Founding Era onward, there was strong consensus about the centrality of religious liberty in the United States.

The imperative of protecting religious freedom was not just a nod in the direction of piety.  It reflects the Framers’ belief that religion was indispensable to sustaining our free system of government.

They crafted a magnificent charter of freedom – the United States Constitution – which provides for limited government, while leaving “the People” broadly at liberty to pursue our lives both as individuals and through free associations.

This quantum leap in liberty has been the mainspring of unprecedented human progress, not only for Americans, but for people around the world.

In the 20th century, our form of free society has faced a severe test.

Men are subject to powerful passions and appetites, and, if unrestrained, are capable of ruthlessly riding roughshod over their neighbors and the community at large.

No society can exist without some means for restraining individual rapacity.

But, if you rely on the coercive power of government to impose restraints, this will inevitably lead to a government that is too controlling, and you will end up with no liberty, just tyranny.

So, the Founders decided to take a gamble.  They called it a great experiment.

They would leave “the People” broad liberty, limit the coercive power of government, and place their trust in self-discipline and the virtue of the American people.

[I]n the Framers’ view, free government was only suitable and sustainable for a religious people.

Modern secularists dismiss this idea of morality as other-worldly superstition imposed by a kill-joy clergy.  In fact, Judeo-Christian moral standards are the ultimate utilitarian rules for human conduct.

They reflect the rules that are best for man, not in the by and by, but in the here and now.

I think we all recognize that over the past 50 years religion has been under increasing attack.

On the other hand, we see the growing ascendency of secularism and the doctrine of moral relativism.

By any honest assessment, the consequences of this moral upheaval have been grim.

Virtually every measure of social pathology continues to gain ground.

Along with the wreckage of the family, we are seeing record levels of depression and mental illness, dispirited young people, soaring suicide rates, increasing numbers of angry and alienated young males, an increase in sense less violence, and a deadly drug epidemic.

[T]he campaign to destroy the traditional moral order has brought with it immense suffering, wreckage, and misery.  And yet, the forces of secularism, ignoring these tragic results, press on with even greater militancy.

First is the force, fervor, and comprehensiveness of the assault on religion we are experiencing today.  This is not decay: it is organized destruction.  Secularists, and their allies among the “progressives,” have marshaled all the force of mass communications, popular culture, the entertainment industry, and academia in an unremitting assault on religion and traditional values.

These instruments are used not only to affirmatively promote secular orthodoxy, but also to drown out and silence opposing voices, and to attack viciously and hold up to ridicule any dissenters.

One of the ironies … is that the secular project has itself become a religion, pursued with religious fervor.  It is taking on the trappings of a religion, including inquisitions and excommunication.

But today – in the face of all the increasing pathologies – instead of addressing the underlying cause, we have the State in the role of alleviator of bad consequences.  We call on the State to mitigate the social costs of personal misconduct and irresponsibility.

So, the reaction to growing illegitimacy is not sexual responsibility, but abortion.

The reaction to drug addiction is safe injection sites.

The solution to the breakdown of the family is for the State to set itself up as the ersatz husband for single mothers and the ersatz father to their children.

The call comes for more and more social programs to deal with the wreckage.  While we think we are solving problems, we are underwriting them.

The enemy of the enemy is my friend ... when they need us.

I’m not an expert on foreign affairs.

I live in rural Nevada amongst people who believe in America First, Donald Trump, the Second Amendment, self-reliance, generosity, limited government and God.

We are the people about who Barack Obama once said,  “They get bitter, they cling to guns or religion or antipathy to people who aren’t like them or anti-immigrant sentiment or anti-trade sentiment as a way to explain their frustrations.”  In short, we’re Hillary’s “deplorables”.  The 63,000,000 people who elected Donald Trump.

That said, I’ll bet I know at least as much as the talking heads on TV who know nearly nothing but sure want to tell us how President Trump should conduct an endless war in the Middle East.

Let’s put the Kurds versus Turkey in perspective, as an example.

The Kurds have been fighting the Turks for hundreds if not thousands of years.  That’s what they like to do in the Middle East.  They’ve been fighting each other so long they probably could not tell you why.  They are the Arab version of the Hatfield's and the McCoy's.

Nobody has any real number of how many of each other they have killed.

So, our President asked a reasonable question.  What are our interests there and why is it worth the life of a single American soldier?

He came up with a reasonable answer.  Now that we are a net exporter of oil, we have very limited interests there and they are not worth a warm bucket of spit much less the life of a single American soldier.  And, if we need to choose our friends, we have only one true friend in the region—Israel, which we helped found.  Occasionally, we can count the Saudis in that category as well, when it suits them.

As for the rest of the area, the historical truth has always been that the enemy of my enemy is my friend.  When they need us, they become the enemies of our enemies and suck us into their intramural battles so we can have young American men and women killed to suit their needs—whatever they may be.

Is any of that worth even a single bandage on, much less the life of one American soldier?

It’s not worth a bandage on, much less the life of, one bomb sniffing dog.

So, why are we there?  Because we are afraid to fight wars to win them.  We apparently learned that in Viet Nam.

After the 9-11 attacks, we—and I mean BOTH sides—made some bad decisions, not the least of which was NOT using weapons to wipe out Al Qaeda which would leave such a lasting scar that these morons would NEVER attack us again.  Do we have small tactical nuclear weapons designed to turn a Al Qaeda or ISIS training camp into glass?  Of course we do.  Unfortunately, we have a State Department which is part of the deep state and would counsel the President such a move would end the world.  Why it would be a “violation of the rules of war.”  Rules of war?  Who are they kidding?

One thing is sure.  Like the death penalty, it would make sure that these killer clowns would never harm an innocent civilian again.

But Harry Truman had the cojones to end the war.  I’m guessing that Donald Trump does as well.  I’m also guessing he will exhaust every alternative before he reaches into our arsenal that deeply.

By NOT having a President who is part of the failures since Viet Nam, our chances of coming up with both new and old solutions is greatly enhanced.

Of course, I’m not an expert in foreign affairs.