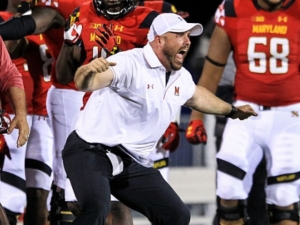 All rise. The sports court of public opinion we call Foul Play-by-Play is now in session, the dishonorable Anthony Varriano presiding over this podcast providing play-by-play and color commentary on foul play in sports, on courts and in them. The attorney of record and my co-host is Michael Haase of McLarty and Haase Law in Glendive, Montana.

After 19-year-old Maryland offensive lineman Jordan McNair died of apparent heat stroke from performing 110-yard sprints according to ESPN, the university placed head coach D.J. Durkin, strength and conditioning coach Rick Court and some trainers on leave while it investigates whether the staff was negligent. The McNair’s have also hired an attorney, who says a lawsuit is likely and Durkin should be fired.

ESPN conducted its own investigation, speaking to two current Maryland football players, former players and football staffers and multiple people close to the program. Here’s what they shared about the football culture under Durkin and Court:

Durkin and Court’s coaching careers are certainly in jeopardy, but couldn’t they be charged with manslaughter at the very least, or is this just a wrongful death civil lawsuit?

Thirteen North Carolina football players, including quarterback Chazz Surratt, were suspended between one and four games for selling school-issued shoes. The selling of the special edition Nike Jordan shoes is a secondary NCAA violation, and UNC self-reported the violation in January.

Since these shoes are uniquely manufactured for and distributed solely to UNC athletes, their rareness by His Airness can fetch upwards of $600 on Ebay, according to Joe Giglio.

In college (even now), there is no doubt I would resell my free shoes for $650 .
Note the screen shot of the shoes listed on eBay pic.twitter.com/m8q5kmPEIj

Meanwhile, the NCAA changed rules to allow “elite” high school basketball prospects to hire agents and undergraduates to return to school if they enter the NBA Draft and aren’t selected. How hypocritical is it that a college basketball player can now hire an agent but not profit from his name, signature or shoes until he signs a contract and doesn’t need the money anymore?

These benefits for attending UNC don’t seem very beneficial. The NCAA has managed to make a benefit a burden. It’s often said possession is nine-tenths of the law. Well, what kind of possession is this if you can’t sell what you possess?

Former All-Star pitcher Esteban Loaiza pleaded guilty Friday to federal drug charges in California. Loaiza acknowledged that he possessed about 44 pounds, or 20 kilos of cocaine with the intent to distribute. He faces 10 years to life in prison when he’s sentenced on Nov. 2. Can we expect Loaiza to be granted leniency in this case since California prisons are still operating above capacity and at increased rates due to healthcare costs?

It might be difficult to imagine what would possess a man who made more than $43 million in Major League Baseball to risk his life trafficking cocaine, but Loaiza’s personal life is riddled with red flags. While few might remember Loaiza starting the 2003 MLB All-Star Game, Loaiza became a celebrity in Mexico after marrying Mexican-American singer Jenni Rivera in 2010. This relationship likely granted Loaiza access to some of the most exclusive parties in Mexico, allowing him to experiment with drugs and meet some of the most powerful men in Mexico.

Those new relationships, both with the drugs and the drug dealers, likely persisted upon his wife filing for divorce in 2012 and then dying in a plane crash shortly after. As an addict myself, and someone who thinks we’re all addicts in some form, whether it be to drugs, alcohol, donuts or God, I can say with conviction that hard times make habits harder to break. For some people it takes a conviction to break those habits.

Louisiana State University suspended sophomore linebacker Tyler Taylor indefinitely after being arrested for allegedly serving as getaway driver in a January burglary of a pawn shop. A months-long investigation resulted in Taylor’s arrest on May 31. He was charged with felony conspiracy to commit a crime, felony party to a crime and felony theft. He was released on $33,550 bond.

Taylor’s cell phone records indicated that he was at the pawn shop the morning of the burglary, another person arrested for the burglary gave him up, and Taylor’s mother apparently owns the getaway truck he was driving. Police also have surveillance footage of the burglary, so Taylor needs a legal miracle.

What kind of potential plea deal or sentence would allow Taylor to play football again, if not this season, someday?

NASCAR, the sport of driving, had its CEO arrested for driving while intoxicated and possession of Oxycodone without a prescription. Brian France, grandson of NASCAR founder William France, was arrested at 7:30 p.m. last Sunday for failing to stop at a stop sign.

France was arraigned Monday morning and released on his own recognizance, having been charged with aggravated driving while intoxicated, a felony, and criminal possession of a controlled substance, a misdemeanor. The felony charge is a result of France having a blood-alcohol content of .18 percent or higher while behind the wheel in New York.

France could be suspended and required to complete a recovery program or be subject to drug testing under NASCAR’s substance abuse policy. Brian’s uncle, Jim, has taken over the duties of CEO during his nephew’s leave of absence.

This isn’t the first time Brian France has been accused of foul play. Twelve years ago the Associated Press reported that a witness saw a silver Lexus owned by France traveling at a "very reckless speed" into a tree near his residence, and the driver "fell over his own feet" while exiting the car. France was never charged as a result, but “the incident did lead to the requirement that the highest-ranking supervisor on duty must be called to the scene of all DUI incidents and that no officer would report off-duty until his or her reports are complete,” according to Auto Week.

France has also been accused of checking into a Betty Ford Clinic for drug rehab by Jack Flowers in his book, The Dirt Under the Asphalt: An Underground History of Stock Car Racing.

How big a blow is this for NASCAR given its struggle to fill the stands lately? And should this motivate the France family to sell NASCAR despite their unwillingness to do so?

Wake Forest assistant basketball coach Jamill Jones was charged with third-degree assault, a misdemeanor, and was subsequently placed on leave by the university. Jones turned himself in on Thursday after punching a man in the face early Sunday. The man died from injuries sustained upon impact with the ground. Jones was released on his own recognizance.

Sandor Szabo was treated for fractures to the left side of his face and the rear of his skull, along with bleeding of the brain. He was taken off life support Tuesday afternoon. The confrontation in question might have been a result of Szabo drunkenly knocking on car windows in the early hours of the morning.

There’s certainly another “wrongful death” lawsuit here, although I almost blame Jones less for the death of Szabo than I do Maryland’s Durkin and Court in the death of McNair.

It’s time for Historically Foul Play, when we go back in time and examine foul play of the past, when DNA evidence made nothing evident because DNA hadn’t been discovered yet.

On August 9, 1905, Ty Cobb’s mother, Amanda Cobb, was arrested on charges of voluntary manslaughter in the shooting death of Cobb’s father, William Herschel Cobb. Amanda said she thought her husband was an intruder trying to enter their home through the bedroom window when she shot him twice. But there had been rumors in town that William suspected his wife of infidelity and had unexpectedly returned home late that evening when she believed him to be out of town.

Cobb would make his Major League debut three weeks later, appearing in 41 games and hitting just .240 with a .588 OPS at the age of 18. It was the only season Cobb would hit below .300 in his 24-year career. His mother was ultimately acquitted in 1906, and in 1907, Cobb went on to lead the majors in hits, runs batted in, stolen bases, batting average, slugging percentage, OPS, obviously, OPS+ and total bases. Seems that was a big weight of Cobb’s shoulders, eh Mike?

Alright, let’s get statistical and make some informed inferences in a segment we call Statistically Significant Foul Play, where we do an analysis of statistics indicative of foul play.

Foul Play-by-Play, its hosts, nor its partners practice nor condone the accusatory promulgation of foul play by athletes for the sake of the hot take. Cheats are innocent until proven guilty. That said, in this case of statistically significant foul play, I’d like to admit into evidence the following significant statistics indicating foul play.

Amongst the top 10 players in Major League Baseball when it comes to being hit by pitches, the Tampa Bay Rays have three, including the league leader, Carlos Gomez, with 18. C.J. Cron has been plunked 14 times and Daniel Robertson has taken 13 for the team.

I’m not calling the defendants cheats. I’m just sayin’ the statistics are significant indicators of foul play. I trust the jurors will make the right decision and find the defendant guilty of foul play given the evidence. I rest my case.

Worst Instances of Foul Play in Films Linked to Sports

For instance, the Matt Damon trifecta would be:

3) Good Will Hunting, in which Matt Damon and the late, great Robin Williams reenact Carlton Fisk’s home run in Game 6 of the 1975 World Series. The foul play, of course, is Will Hunting assaulting a police officer, with the most foul play being Will’s pushing away of Skylar.

2) Stuck On You, in which Damon’s Bob Tenor and Greg Kinnear’s Walt Tenor play goalie in an adult hockey league as conjoined twins. They’re also a good golfer and caddy combo, a switch-pitching pitcher in baseball, a terror in a boxing ring, and not bad on the tennis court, either. They’re also Martha’s Vineyard legends for their high school football legacies. The foul play in this one is Bob’s DUI resulting from Greg’s excessive drinking in order to convince his brother to have a surgery to separate them.

1) The Rainmaker, in which a softball bat is the preferred weapon of Kelly Riker’s abusive husband, whom Damon kills with said bat in self defense.

3) The Naked Gun: Ricardo Montalban brainwashes a baseball player to assassinate Queen Elizabeth II, but Leslie Nielsen goes undercover as an umpire with a generous strike zone and emphatic third-strike calls to “get his man.”

2) A Few Good Men: Tom Cruise thinks better with his bat, and he plays softball while negotiating a plea deal with Kevin Bacon. The most foul play is Jack Nicholson covering up his involvement in the death of a Marine.

1) The Fan: A San Francisco Giants superfan and knife salesman played by Robert De Niro is thrilled to have Wesley Snipes join the team, but his early performance leaves much to be desired. So the fan solves the problem by murdering the Giants’ player wearing Snipes’s lucky number 11. While stalking Snipes, De Niro saves his son from drowning, only to kidnap him and hold him hostage until he gets some appreciation, despite Snipes being unaware of the fan’s criminal contributions.