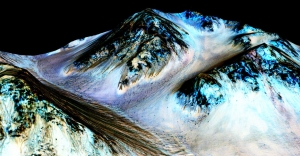 Italian researchers have discovered a Martian lake! Well - probably. You see, way back in 2003 the European Space Agency launched the Mars Express and it’s been orbiting the red planet ever since. It’s not the first Martian orbital mission, nor will it be the last. But Express certainly hit the jackpot recently when it scanned what appears to be a 12 mile radius underground lake in the southern polar region of Mars.

From the researcher’s abstract report:

“The presence of liquid water at the base of the Martian polar caps has long been suspected but not observed. We surveyed the Planum Australe region using the MARSIS (Mars Advanced Radar for Subsurface and Ionosphere Sounding) instrument, a low-frequency radar on the Mars Express spacecraft. Radar profiles collected between May 2012 and December 2015 contain evidence of liquid water trapped below the ice of the South Polar Layered Deposits. Anomalously bright subsurface reflections are evident within a well-defined, 20-kilometer-wide zone centered at 193°E, 81°S, which is surrounded by much less reflective areas. Quantitative analysis of the radar signals shows that this bright feature has high relative dielectric permittivity (>15), matching that of water-bearing materials. We interpret this feature as a stable body of liquid water on Mars.”

Well, I guess I mean - it is very probable that there is water on Mars. Looks to me like my dream of being a Martian colonist is one step closer. Of course, massive terraforming would need to happen for Mars to ever be habitable but still, it is the stuff of science fiction legends. But I’ve prepared for it. I mean, the Martian temperature can get as cold as -195 F during the winter and as warm as 70 F in the summer near the equator (but at night the temperature can plummet to about - 100 F).

And I live in Minnesota so I’m pretty much use to that range of temperature extreme. You feel me?

But I digress. Water on Mars. Sure it’s a frozen lake about a mile under the surface. But still. Water on Mars. I don’t mean to armchair speculate but I do watch The Expanse so I’m pretty much a Martian expert and my expert opinion is that - water = life.

Obviously, no one expects there to be actual Martians on Mars. As much as I love the JLA, Martian Manhunter is pretty much not going to happen. But still - microbes? Snow algae? Did you know that most ice has little pockets of water between ice crystals that microbes can use to keep from getting fully frozen?

I’m telling you guys - water on Mars and water = life!

Alas, it will probably be microscopic life but still - I’ll take it!

The full report can be found here.