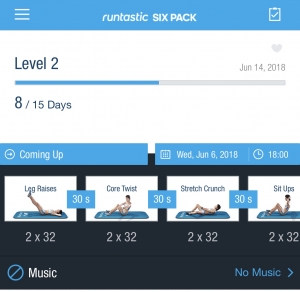 I’ve been in pursuit of six-pack abs since the start of 2018, but a broken bone in my foot limited my ability to do cardiovascular exercises to cut the belly fat that covers up my abs. During that time I was doing the 10-minute abs workout on Livestrong’s MyPlate app, but have since purchased a Fitbit Alta and begun using the Fitbit app to log my caloric consumption and exertion.

While I have been doing some of the workouts available for free by Fitbit Coach, and I still do the 10-minute abs workout on the MyPlate app occasionally, Runtastic’s Six Pack app is my new go-to exercise app since acquiring promotional access to their workouts membership. Here’s why:

The Runtastic Exercises are More Difficult

I used to do the 10-minute abs workout on MyPlate two or three times because the exercises were so easy. I’ve since added more time and more repetitions to make the workout more difficult as I’ve become more fit.

Runtastic’s Six Pack app is far from easy. Sure, at level one you’ll wonder how this app will ever shred your abs, but once you get to level two, you’ll be in a world of hurt, which is good. I burn more calories and build more muscle in the 17 minutes I spend doing Runtastic’s Six Pack exercises than I did in the 20 minutes it took to complete the MyPlate abs workout twice. How do I know? Because I sweat way more and am way more exhausted after the Runtastic workout than I am after the MyPlate workout. And each workout gets more and more difficult.

Despite asking how well you performed the exercises included in the Fitbit Coach workouts, that information doesn’t personalize the workout for you. Runtastic doesn’t bother asking whether you were able to complete all the repetitions of specific exercises. It just expects you to complete all the repetitions and asks you if you “want to go the extra mile,” adding another set of a surprise exercise. Runtastic then adds a few more repetitions to your next workout, and I like that. Progressively increasing exercise intensity is what builds muscle and burns fat. Pushing yourself a little harder each time you workout is how six-pack abs start showing through, and I can actually tell that my ab muscles are growing thanks to Runtastic’s Six Pack app.

Runtastic Alternates the Order of Your Workouts’ Exercises

No Runtastic Six Pack abs exercise is the same as one you’ve done previously because Runtastic alternates the order of your workouts’ exercises. Doing the same exercises in the same order makes each exercise easier to complete each time you workout. You’ll create muscle memory in the most literal sense. Back when I was a bodybuilding, gym rat, I would do the exercises in my workout in a different order to shock my body. If you’ve ever done bench press at the beginning of your workout and then at the end the next time, you know the struggle of completing all your bench repetitions at the end of your workout as opposed to the beginning. The same is true of your abs. Leg lifts are pretty easy when they’re the first exercise of your workout, but put them at the end and you’ll be reaching deep into your core for all the strength it can muster. You’ll actually be able to feel your six-pack abs developing.

Runtastic Reminds You it’s Time for a Workout

I’m pretty dedicated when it comes to my health, but I’m probably just like you: I don’t love to exercise unless that exercise is playing some sort of sport. I don’t need much motivation to play baseball, tennis or go for a bike ride, but I’m not thinking about exercising while at home watching the game. That’s why I love that Runtastic reminds me when my next exercise is due. I don’t always do it right that second, but I don’t often forget that it must be done that day.

Before I turned on the reminders I managed to ignore the Six Pack app for quite some time. It took me weeks to get through level one because I didn’t do an exercise for a week. I immediately realized my mistake upon attempting my first workout after the week off. It shouldn’t have been as hard as it was, and I don’t know how I discovered the Runtastic reminders, but it could have been one of the helpful tips Runtastic gives when you complete your workout.

I still don’t have six-pack abs, but I’m more confident than I’ve ever been since starting the Runtastic Six Pack app workouts.