Johnny Knoxville's Action Point hurts to watch, and not because of the stunts 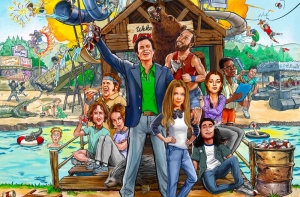 The setting for Johnny Knoxville’s Action Point is based on an actual place called Action Park — a New Jersey amusement park opened in May of 1978. While it was operated by drunk, stoned teenagers, that wasn’t the reason for the park earning the nickname “Accident Park.” It was their boss who demanded the park test the bounds of physics and personal injury laws.

Action Park CEO Gene Mulvihill reportedly offered employees $100 to test rides, and he opened them despite those tests resulting in injuries. It wasn’t that Mulvihill didn’t care about his employees and patrons. He just didn’t think he or his employees should be solely responsible for the experiences patrons could have at Action Park. “You make your own fun” Knoxville says at one point in the movie, channeling Mulvihill, whose “philosophy was that amusement park visitors should be in control of their experience, envisioning a park where patrons managed the rides—including how fast and how high they went,” according to a piece by Brynn Holland for The History Channel.  It should be no surprise that Mulvihill’s mind for mayhem attracted the eye of Knoxville — an eye he nearly lost in the making of Action Point.

Mulvihill basically believed amusement parks to be like ski resorts. Regardless of proper maintenance and supervision of attractions, they, like a ice- and snow-covered mountain, are inherently dangerous, and upon paying the price of admission, the patron, not the park, should be solely responsible for any injuries sustained as a result of the patron’s actions. While Mulvihill’s argument that any ride has the potential to cause injury is sound, that’s not how judges saw it when a handful of personal injury lawsuits forced Mulvihill to close Action Park in September of 1996.

The practice of Mulvihill’s philosophy by employees and patrons had predictable results. The wave pool was called “The Grave Pool” because lifeguards frequently rescued up to 30 swimmers on busy days. Women also frequently sustained yeast infections from the water. Six people died at Action Park, which was obviously not advertised in the movie. But the almost 20 years Action Park was open for business is a testament to its patrons’ acceptance and practice of personal responsibility, a quality which Knoxville’s character, D.C., assumes is foreign to his granddaughter, who I thought was a grandson for half the film.

Action Park is no doubt the perfect setting for Knoxville’s jackassian stunts, but it should have been the subject as well as the setting. The place didn’t just have character; it was a character. Instead, Action Point tries to be a story about a part-time father learning how to be a good father figure when it should tell the story of the most dangerous amusement park that’s ever existed and the men and women responsible for that existence.

I’ve long been a fan of Knoxville’s Jackass shenanigans. I was even a jackass myself back in high school. Some of the first films I made were of my friends and me doing stunts like riding office chairs down really steep streets, bicycle jousting, and being towed on a snowboard behind a GMC Jimmy. The Jackass movies are responsible for some of the loudest, longest laughs I’ve enjoyed in theaters besides maybe Your Highness. Even Knoxville’s Bad Grandpa had its moments (mostly the end, which wasn’t because of Knoxville) despite attempting to tell a story. But Bad Grandpa wasn’t much of a stunt movie. Action Point is, and John Altschuler and Dave Krinsky’s attempt at storytelling sinks Knoxville’s latest and quite possibly last attempt at making us laugh at the expense of his and his friends’ bodies.

Knoxville sustained four concussions, broke his hand, lost a five-inch piece of skin from his scalp, lost two teeth, one of which was shoved into his skull, and sneezed his eyeball out of his head while shooting the stunts for Action Point. He said in an interview on “The Dan LeBatard Show with Stu Gotz” that he had to put his sessions with his therapist on hold to get into character. In his first session, Knoxville thought his therapist was a genius for saying “think before you act,” because he had never seriously considered it an option. Stuntmen aren’t unlike athletes in that acting instinctively tends to be safer and more effective than thinking. Thinking leads to over-analyzation and fear.

But Knoxville should have thought about how to make Action Point before agreeing to make it. He should have demanded that this “based on a true story” story should simply tell the true story. Knoxville isn’t a good enough actor to give a convincing, dramatic performance, upon which the film’s story depends. A bear gave a better performance than Knoxville did in Action Point, and no amount of cannabis could make the stuntless segments of the film enjoyable, which is most of the film.

Had Knoxville simply done a mockumentary about Action Park, portraying a daredevil amusement park owner whose only family are his misfit employees and regular patrons, and whose challenge is to keep the park open despite a new competitor and threats of legal action, Action Point would have done Action Park justice. Instead, Action Point tells an all too familiar story so badly it makes the stunts less enjoyable. Action Point should have been another Jackass, not another Bad Grandpa with flashbacks.