Childish Gambino's "This is America" is as great as you've heard 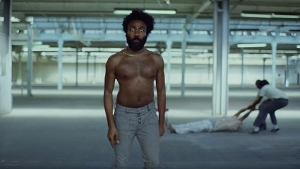 Holy wow, Batman! “This is America” is sophisticated, genius art!

But I’ll get back to that.

First I just want to say that, oftentimes music and movies are too quickly labeled “genius” or “art,” simply because they are created. And if something is created it must be - art. Especially if it’s created by someone we adore!  Well - maybe. But not all movies are art, nor do they try to be. The same, I think it could be said, is true for music.

And then there is the much maligned “music video.” A truly lost form of expression. Well, not “lost” exactly but certainly ramped way down from the 90’s heydays where music companies paid to produce music videos because, “If you don’t have a video - you don’t have a hit!”

Remember, MTV used to have two full channels dedicated to music video. Not so much any longer. Nowadays, rich musicians use their own money to finance their own music videos and take the loss in hopes that increased publicity from said video, will lead to higher sales and more clicks on YouTube (or similar stream channels,) which also brings in the bacon.

And then we come to Childish Gambino’s “This is America.” For those that don’t know, Childish Gambino is the musical stage name for freakishly talented Donald Glover - actor, writer, producer (no relation to actor  Danny Glover). Gambino actually has several music videos out, most of them cleverly written with semi humorous, semi serious tones. And, for my taste - with mixed results.

So, this weekend, when I heard the crushing throng of folks talking about Gambino's “This is America,” I was skeptical. I mean, Glover’s talent is self evident. His writing is fantastic, his comedic timing is spot on, he’s going to be BADASS as Lando Calrissian in the upcoming Star Wars Solo film. (But that’s just a prediction. That will totally become truth!)

Anyway. Again, I was a bit skeptical because - as much a fan of Glover’s as I am in regard to his writing and acting, I am lukewarm on his music.

And then I watched “This is America.” Dear Bloody God was my skepticism misplaced!

As a song - “This is America” has choir melodies and trap rhythms that blend incredibly well together. The writing is blistering social critique from all angles of race. But as a video - it’s a work of genius art.

Movies, and music video are a world of images and imagery. “Show, don’t tell” is the most commonly used phrase told to young directors - “Show your audience what is happening - don’t have characters tell the audience what happened or is happening!”  Show your visuals. Show your imagery. This is, after all, a visual medium.

And “This is America” drips with important imagery beginning with (but certainly not limited to) Gambino’s Jim Crow comparison.  The NY Times has a nice collection of writers from all over the country commenting on the video’s imagery. And since the imagery is critical to understanding the video, I urge viewers to read into some alternate theories into the “meaning” behind Gambino’s “This is America.”

David Pilgrim, the founder and curator of the Jim Crow Museum at Ferris State University is interviewed over at Huffingtonpost.com. Pilgrim has this to say,

“You never know what’s in the head of an artist unless they tell you. So we have to interpret and sometimes we get it right. I did go out and read some of the critiques from various people and they’re just all over the place. I like it. I like it because, quite frankly, I like any art that pushes intelligent discussions about racism. Any art that pushes that is good for this country.”

In all his points here, I agree wholeheartedly. I would also add that in order to be “great art”, it has to have the capacity to scare people. And “This is America” is doing just that - angering & scaring folks of all races, all over the country. That being said, the positive praise far outweighs the negative. The video has a crushing amount of fervent supporters. Count myself among the supporters.

But if you watch the video and you “just don’t get it” or even if you hate it - that’s okay too. Great art, such as this, can handle the criticism. I would urge you to read up more on the history of the imagery Then watch the video again, watch the sharply directed & choreographed obfuscations in the foreground and the background and take note of the loving treatment guns receive juxtaposed with the cold indifference of dead black bodies.

“This is America” is a really great, and important work.

I am certainly not alone in my thoughts. In less than one week, “This is America” has racked up more than 65 million hits on YouTube alone. And so, like this upcoming fact I am about to drop, or not but - “This is America” will go down as one of the greatest music videos ever produced.

Maybe even the greatest.

And that title will be well deserved.

Getting older ain't all that bad! 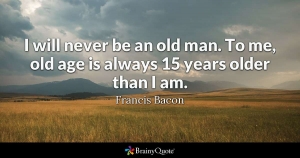 There is a disturbing article in a recent issue of Atlantic Magazine by a prominent physician at the University of Pennsylvania. Ezekiel J. Emanuelis an oncologist, a bioethicist, and a vice provost of the University, and is the author or editor of 10 books, including Reinventing American Health Care. So he is a bright guy who knows a lot about health. His premise is that no one, in this day and age, should aspire to live longer than 75 years of age.

Now I would be skeptical of such an assertion no matter what my current age. I read the obituary section of several newspapers each day, and make note of a number of successful people who have lived a much longer lifespan. But the Atlantic article becomes more than a bit personal to me. You see, this week, I turned 78.

The premise of Dr. Emanuel’s article is that, for most people, the quality of life diminishes after 75.  He writes that aging “robs us of our creativity and ability to contribute to work, society and the world. We are no longer remembered as vibrant and engaged but as feeble, ineffectual, even pathetic.” He concludes by assuming that those who continue to be productive long after 75 are “outliers,” and far from the norm.

But what great philosopher or scientist has concluded that one has to be productive in later years? And just what does Dr. Emanuel mean by being productive? Productivity does not particularly mean that someone who is getting a bit older and slowing down has to be creative. Isn’t the idea of retirement a pathway that allows seniors to absorb the world around them in any way they choose?

If being productive means that I’m hanging out with grandkids more, reading more, reintroducing myself to old friends who go back 60 years and beyond, taking an occasional music lesson, and even trying to be a more than passable cook, then yes, just like many of my current friends, I am being quite productive.

I gazed in the mirror this week, and told myself, look you are 78. Deal with it, and maybe even relish in all the experiences and fond memories. I think it was Lucille Ball who once said: “The secret of staying young is to live honestly, eat slowly, and lie about your age.” I’d rather acknowledge that age is strictly a case of mind over matter. If you don’t mind, it doesn’t matter. Well I don’t mind. And as I get older, I’m quick to quote Mark Twain who told his readers that wrinkles should merely indicate where smiles have been.

I’d like to think that I still have a long life ahead because I watch what I eat, and I workout a lot. My old college roommate is quick to remind me that the big advantage of exercising and diet is that I will die a lot healthier.

Reaching a milestone of three quarters of a century should not be that big a deal. After all, 78 is really just a number, isn’t it? Like a bunch of other numbers in your life. Dates, addresses, sums, phone numbers, passwords, and then, in the mix, is age. But I hope it is more than that.I wrote a few years back, that my life has been, by any measure, full and hard living, with ups and downs too numerous to mention.

If there is a yin and a yang, the before and the after, what has happened and what is yet to be, then maybe seventy-eight is a special way-post for me. In fact, I really believe that I could be at the top of my game, and ready for the long and relaxing ride back down.

So to the good doctor who wants to shut his life down at 75, I say that’s your call; your freedom of choice. As for me, I still have a whole lot of living to do. And not just passive living.

Dylan Thomas said it best. “Do not go gentle into the night. Rage, rage against the dying of the light.”