Opinion: US healthcare costs so out of control, I'd welcome a fat tax 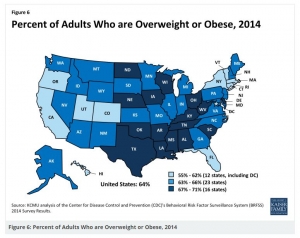 The most recent World Health Organization rankings of the world’s health systems has the United States at 37th -- seven spots behind its neighbor to the north, Canada, and 19 spots behind its American predecessor, the United Kingdom. That might not seem so bad on a list 190 nations long, but the United States ranks last in health care system performance among the 11 richest countries included in a study conducted by The Commonwealth Fund. In that study, “the U.S. ranks last in Access, Equity, and Health Care Outcomes, and next to last in Administrative Efficiency, as reported by patients and providers.”

Much of our inflated health insurance premiums in America comes from paying to create your bill. That’s right -- 25 percent of total U.S. hospital costs are administrative costs. The United States had the highest administrative costs of the eight countries studied by The Commonwealth Fund. Scotland and Canada had the lowest, and reducing U.S. per capita spending for hospital administration to Scottish or Canadian levels would have saved more than $150 billion in 2011.

Treating healthcare like any other marketplace requires careful, complicated codification of products sold and services rendered. People must be paid to determine how much your healthcare costs, and that can’t be changed, but it can be improved upon. Allowing insurance companies to profit from people’s health makes for a marketplace in which every cent of cost is counted and every penny of profit is protected. Profit motive always results in more scrutiny by the haves at the expense of the have-nots.

You might think that an industry that preys on the unhealthy and the healthy alike would prefer their consumers healthy as to enjoy the profits from your premium payments without paying for healthcare. But the cost of your health insurance premium already includes your health insurer’s profit margin. The health insurer is going to do all it can assure a certain amount a profit except for a catastrophic health emergency that consumes the country. But if the consuming population is unhealthy relative to other markets, the health insurer has good reason to inflate prices to cover its projected costs. That is indeed the case in the United States.

The United States is the 34th healthiest nation in the world, according to 24/7 Wall St. That’s not terrible, but not what you probably expect from a nation advertised by Americans as the greatest in the world. And you’re paying for it.

Not unlike a mortgage or auto insurance premium, the cost of your health insurance premium is an average based on the health insurer’s risk. That risk is the potential costs the health insurer could incur based on the perceived health of its insured consumers. I’ve written in the past how Republicans can’t repeal and replace Obamacare because their constituents, most of whom reside in the South, need Obamacare. Southerners are the least healthy Americans, with 20 percent reporting fair or poor health in 2014. The South also has the highest rates for diabetes, obesity and infant mortality in the nation. The South also accounts for nearly as many uninsured people as the rest of America combined, and 17 percent of the uninsured fall into the coverage gap for Medicaid expansion. Your health insurance premiums pay for their healthcare as well as your own, which is why, given the current for-profit health insurance marketplace, I would welcome a fat tax.

A fat tax is a tax on fat people. People who live unhealthy lifestyles should pay more for health insurance. As a healthy consumer of health insurance, I’d prefer to pay a lower premium given my dedication to maintaining good health at the expense of those who refuse to maintain good health. I might be fat shaming some people, but I don’t care. I shouldn’t have to pay for your diabetes because you can’t resist stuffing your face with Twinkies. Maintaining your health is your responsibility and no one else’s, and you should be punished for failing to maintain good health at the expense of your neighbors. But since something that could ever be referred to as a fat tax by the opposition would never pass Congress, a rewarding people with discounts for their healthy habits would be much more likely.

I foresee this program as mirroring the Progressive auto insurance Snapshot program -- “a program that personalizes your rate based on your ACTUAL driving.” Instead of plugging a device into your car, you’d use a Fitbit or similar health monitoring device with a heart rate monitor. Couple your daily monitoring of your exercise and diet with the results of regular checkups with your physician to confirm your healthy habits and you’ll be given a discount on your monthly health insurance premium as determined by your overall health.

Simply scheduling and completing regular checkups will help lower premium prices by catching things early and allowing for preventative medicine to work rather than resorting to more expensive reactionary measures. That could be the first discount bracket: schedule and complete a physical twice annually for two percent off your monthly premium. That way everyone at least has a chance to save some money. Those who fail to do so will pick up the tab.

The real discounts will be reserved for those consumers who regularly show signs of living a healthy lifestyle. People who don’t use tobacco products would receive a one-percent discount on their monthly premiums that the insurer will recoup from charging tobacco users with a one-percent premium penalty.

Non-drinkers would also receive a one-percent discount, as alcohol is a cancer-causing carcinogen and dangerous when consumed irresponsibly. Accessing a penalty for drinking, however, would be problematic, as social and occasional drinkers shouldn’t be penalized for enjoying alcohol responsibly. But say you get a ticket for driving while intoxicated -- that’s two percent tacked onto your health insurance premium for putting your own health and the health of your neighbors at risk. The same goes for possession of illegal drugs, except cannabis. No discount or penalty would be accessed for cannabis use since it is proven to kill cancer cells and be of medical value.

Even if you are a tobacco user and a heavy drinker or drug user, you too deserve opportunities to lower your health insurance premiums. So anyone who meets the Department of Health and Human Services recommendations for weekly exercise for a month gets a one-percent discount on their premium the following month. That’s just 150 minutes of moderate aerobic activity or 75 minutes of vigorous aerobic activity weekly. Add that to the two-percent discount for completing bi-annual physicals, and you could offset the penalties of driving under the influence and smoking.

Big money will be saved based on your body fat. If an adult male or female maintains an athletic body fat percentage (between five and 10 percent for males and between eight and 15 percent for females), they get an additional two-percent premium discount on top of the two percent for completing bi-annual physicals. That same two percent would have to be paid by someone, though, so it would fall on the obese.

These discounts and penalties would motivate consumers to improve their health in order to save money, in turn, lowering premiums for everyone by improving the overall health of all consumers in the marketplace. The higher the U.S. climbs out of that 34th spot in overall health, the less everyone pays in health insurance premiums.