Comparing the Fitbit and MyPlate apps 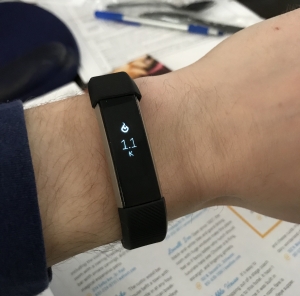 I recently scored a Fitbit Alta for $40 and have been making the transition from using the MyPlate app by Livestrong to using the Fitbit app. I mostly purchased a Fitbit because I suspected I was underestimating my daily caloric exertion in the MyPlate app. What made me suspect that? Well, I set a MyPlate goal of losing a half pound per week and shed six pounds in three weeks.

It only took one day for my Fitbit to prove my hypothesis true. I had been underestimating my caloric exertion by a lot because I don’t carry my phone with me everywhere I go. I was shocked by how many steps the Fitbit monitored and was immediately pleased with my purchase. But over the next few days, I discovered things I miss about the MyPlate app and things I like about the Fitbit app.

What I Miss About the MyPlate App

I really like the burn I got from the 10-minute abs workout and seven-minute cardio sculpting workout. I can still do the workouts, but logging the calories burned isn’t as easy as wearing my Fitbit while I exercise.

I noticed after completing my abs workout that my Fitbit didn’t come close to logging the 74 calories burned the MyPlate abs workout says it burns. That’s probably because most abs exercises involve very few steps, and the Fitbit Alta doesn’t monitor heart rate. I ended up adding my calories burned manually, using “Calisthenics” as my exercise in the Fitbit app. I have to do the same for the cardio sculpting workout. This is a minor inconvenience.

The Vast Database of Exercises You Can Add Manually

The MyPlate app also has a more vast database of exercises you can add manually, including cooking, baking, bathing, and even sexual activity. My Fitbit might be splashproof, but it’s not meant to be worn in the shower, which means it doesn’t log the calories you burn while bathing (roughly 140 calories per hour).

In the Fitbit app, I had to substitute the “cleaning” exercise for the baking I did while my Fitbit charged. Had I been wearing my Fitbit, however, my movements would have been monitored and calories burned registered.

The Macronutrient Breakdown of Meals and Foods

The Fitbit Coach app provides a slew of workouts for Fitbit users, some of which are free for all users. You can even pick your trainer and whether you want to hear their encouragement and tips during your workout. The free catalog of exercise options is vast and diverse when compared to that of the MyPlate app, and calories burned are automatically registered in the Fitbit app.

The “In the Zone” Feature

The most frustrating thing about the MyPlate app is its barcode reader, which takes considerably longer than the Fitbit app does to recognize the barcodes of particular foods. Not only does it take longer to recognize the barcodes, but MyPlate’s database of barcodes is not as vast as Fitbit’s. The Fitbit barcode reader recognizes barcodes, even in low light, almost immediately, and is more likely than the MyPlate reader to find the food you’re eating.

Overall, the Fitbit app is slightly better than the MyPlate app, but only when linked to a Fitbit. If not for purchasing my Fitbit Alta, I’d probably still be using the MyPlate app. I say that because of the macronutrient breakdown of foods and meals MyPlate provides. I really like to see how everything I eat breaks down into carbohydrates, fat and protein before I eat it. I plan my meals days in advance at times, and now I have to estimate those macronutrient breakdowns based on the nutrition facts of each food. It’s a modest inconvenience I can tolerate as long as my caloric exertion is more accurately monitored.