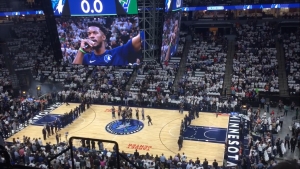 The Minnesota Timberwolves are a mess without Jimmy Butler, and the question isn’t whether Butler will be able to return for the playoffs, but if the Wolves can make the playoffs without him.

Karl-Anthony Towns did everything he could to carry his Wolves to a win in Portland to no avail on Thursday night. He scored 34 points on 11-of-19 shooting, went 11-for-12 from the free throw line and grabbed 17 rebounds, which was still only good enough for a -6 plus/minus. But a -6 plus/minus is better than not having Towns on the floor.

Towns followed Thursday’s performance with an ejection in the closing minutes of the first half the following night in Utah -- a game in which his plus/minus was +6 and replaced by the -2 of Gorgui Dieng, who scored six points and grabbed four rebounds in 19 minutes. Towns couldn’t have picked a worse time for the first ejection of his career.

Minnesota nearly pulled off a comeback without Towns, but things spiraled out of control in the fourth quarter -- as usual -- culminating in Jeff Teague lowering his shoulder into Marco Rubio, sending him into the seats with 5:20 to go and the Wolves down nine. It was the first time in franchise history the Timberwolves had two players ejected in the same game. Head coach Tom Thibodeau also earned two technical fouls. While the Wolves’ struggles on defense and scoring in the fourth quarter without Butler were evident on Thursday, their collective frustration and lack of leadership was ever present on Friday.

The Timberwolves might be leading the NBA’s Northwest Division despite the consecutive losses in consecutive nights, but they are not a lock to make the playoffs let alone win the division. The Denver Nuggets, the eighth seed in the Western Conference currently, are just two games behind the Wolves in the standings. Utah is just four games back after its win on Friday, and things only get tougher for Minnesota.

The Wolves play 10 of their remaining 16 games against teams with records above .500 and another against a young, running Laker squad that gave the Wolves trouble when Butler was on the floor. The Wolves probably don’t have to worry about the Los Angeles Clippers taking their spot in the playoffs. While the Clippers are just a game and a half behind Denver for the eighth seed in the West, they play 16 of their final 21 games against teams over .500.

The Jazz are most likely to replace the Wolves in the playoffs. They play nine of their 20 remaining games against teams above .500. So not only do the Jazz have four games in hand to gain ground on the Wolves, but they play an easier schedule, despite three back-to-backs to Minnesota’s two.

It wouldn’t be unrealistic to see Minnesota lose its next six games, which would make for an eight-game losing streak. The Wolves’ current three-game losing streak is the longest of the season, but they host Boston and Golden State, visit the Wizards and Spurs, and then host the Rockets and Clippers -- all teams above .500. A single win during that stretch would be a huge lift for a young team struggling to manage its emotions in the face of adversity.

During the same stretch, Utah has already beaten Sacramento and get to face Orlando, Indiana, Memphis, New Orleans, Detroit, Phoenix, Sacramento again, and the hapless Hawks. If the Jazz can win just four of those eight remaining games, and Minnesota goes winless, Utah would be just half a game behind Minnesota in the West, and Butler would still be out at least another five days.

Butler had surgery for a torn meniscus in his right knee on Sunday, Feb. 25. The expected recovery time is four to six weeks, which keeps him out until March 25 at the earliest. You can be sure the moment Butler is physically cleared to play, he will play. That’s just his nature, which is probably why he and Thibodeau are inseparable. They’re both old-school ballers.

Given the best case scenario, Butler could return in time to get his feet under him during the Wolves’ final eight regular season games. But the Wolves won’t likely be able to extend Butler the courtesy of easing back into the game. The Timberwolves need Jimmy Butler just to make the playoffs. By the earliest time Butler can play, Minnesota could be 39-35 and no longer in control of its postseason destiny. While Minnesota has the Knicks to recover from the grueling stretch of their schedule and end a potential eight-game losing streak, the Wolves play in Philadelphia the very next day.

Luckily, the Jazz enter the tough stretch of their remaining schedule during Butler’s potential return. After playing in San Antonio, the Jazz travel to Golden State and then play host to Boston and Memphis before an April 1 game in Minnesota that will be bigger than anyone could have imagined when the two teams met in Minnesota’s home opener of the renovated Target Center on Oct. 20. If the Jazz win the games they should and lose to Indiana, New Orleans, San Antonio, Golden State and Boston, they’ll enter that game in Minnesota 41-35.

If Butler can’t return in four weeks, the Wolves can take some comfort in their schedule while they wait. Memphis, Atlanta and Dallas fill the schedule prior to the April 1 meeting with the Jazz, giving Minnesota a chance to gain some ground on Utah. Wins in all three of those games would put Minnesota at 42-35 -- a half game up on Utah.

Regardless of where the Wolves sit in the standings come April 1, winning that game would give them the tiebreaker over the Jazz. A loss wouldn’t eliminate Minnesota, though. Utah has to deal with the running Lakers twice, the Clippers, the Warriors and the Trail Blazers to finish the regular season. The Wolves also visit the Lakers, but get Memphis at home and Denver twice to close the regular season.

If it takes Butler the six weeks to be physically cleared to play, the Wolves will have him for two games at home against Memphis and Denver. Whether he returns at all will depend on where the Wolves are in the standings at the time, but odds are they’ll be fighting for their playoff lives rather than resting their legs for the playoffs. Without Butler, the Wolves are the worst defensive team in the NBA, according to Chris Hine of the Star Tribune. With him, they have the 11th best defensive rating in the league. They have five days off to prepare for the visiting Celtics on Thursday in a nationally televised game.