Spielberg's new film, Ready Player One, is based on the once loved, now often ridiculed or outright disliked novel of the same name written by Ernest Cline. The novel is unread by me but I understand the premise. And I’ve seen the movie now which probably means all the good parts of the book have been spoiled for me.

The novel, from what I understand, is a nostalgic, geek lore Easter egg hunt oft criticized for being fun but not exactly a writing masterpiece, but whatever. The reader was bombarded with nostalgic, nerdy, geek references from the 80’s. And that nostalgic weight carried RPO on to the NYT best seller list for a long time.

And now Steven Spielberg, the man directly responsible for much of our actual 80’s pop culture and nostalgic geeky moments has his new movie! So what is it about?

“In the year 2045, people can escape their harsh reality in the OASIS, an immersive virtual world where you can go anywhere, do anything, be anyone-the only limits are your own imagination. OASIS creator James Halliday left his immense fortune and control of the Oasis to the winner of a contest designed to find a worthy heir. When unlikely hero Wade Watts conquers the first challenge of the reality-bending treasure hunt, he and his friends-known as the High Five-are hurled into a fantastical universe of discovery and danger to save the OASIS and their world.”

Okay. Fair enough. Dystopian world - bad. Super cool VR world - good! That premise seems Spielberg enough. And, for the most part the movie is charming, nostalgic, good fun. With only a single swear word (one delightfully placed F bomb) the movie is standard Spielbergian Hollywood family entertainment and kids of all ages will probably dig it. RPO has at least two beautiful action sequences and one perfectly recreated set piece from a beloved horror film (which I suspect will go down as the one truly great scene of the film).

Anyway. I like RPO. To get that out of the way. I was hoping to love it, I was worried I was going to hate it but - no, I like it. That being said, despite all its stunning technical charm, the movie is a little shallow and the characters are poorly drawn and one dimensional.

Right now let’s focus on the good in RPO. Remember the scene in Lord of the Rings: Return of the King where Legolas kills the Oliphant? Well, the technology was there to … well … make it look like a CGI Legolas awkwardly bouncing around on a giant moving elephant and finally sliding down its trunk. Despite my dislike of the scene, the CGI isn’t quite capable of pulling that off perfectly. Things don’t look entirely real. It kind of gets the job done. I guess. We get what was going on. The oliphant looks good but the motion of Legolas is just - bizarre and not based in real world physics.

Well, those days are gone! The CGI is now there and the work in RPO is stunning. Movement and motion of all CGI (and / or motion captured) characters are flawless. RPO effortlessly blends realistic looking monsters and creatures with virtual looking avatar figures and their realistic looking weapons, vehicle and gear.

The scavenger hunt / investigation portions of the film are as entertaining as the action. Nothing slows the pace of the film. The moments of humor all work and we easily understand the motivations off the lead protagonists, (Ty Sheridan and Olivia Cooke) and the story’s main antagonist (Ben Mendelsohn). If you are looking for beautiful looking family friendly action - RPO is your movie.

But it’s not exactly a sophisticated think piece - and it doesn’t have to be! But RPO is a bit hollow at its core for me to love it. Casting is a slight issue. Ty Sheridan plays lead Wade / Parzival. Sheridan was a fairly accomplished child actor and has turned into a totally adequate teen actor. He will not fuck your scene up. Nor will he take a poorly drawn character and breath true life into it. And Wade, as a character is … you know. Fine. Except for that one thing (which I’ll get to later).

Which is the polar opposite of wunderkind Olivia Cooke who wowed me a couple of weeks ago in Thoroughbreds. Watching that film I kept thinking, “Who the F is this incredible actress and where did she come from?” From many things it turns out, but most famously from Bates Motel. Cooke is great and watching the film I couldn’t help but wonder how fantastic a lead she would have been if they switched the genders of Wade / Samantha. (Imagine the nerd rage). Sadly, Cooke’s character, Samantha / Art3mis is a little underdrawn and mainly acts as a prize for Wade to win.

Of the additional three supporting cast - Aech gets the most virtual time with Daito and Sho rounding out the High Five (as they call themselves). But once we meet them in the real world they just kind of stand around. One of them drives a van. Not exactly the stuff of supporting cast legends.

But if you were to say, “But the story is about Wade! He is the only one that has to be a fully realized character!”

Fair enough. But do we really need yet another tent pole Hollywood blockbuster featuring a white male lead who is backed up by his super hot white trophy prize girl friend with a couple of people of color in the background who don’t get to do much other than stand around and be people of color? Steven Spielberg virtually has the clout to do anything he wants in regards to his film. Perhaps he could have pushed a little on this point.

The other main issue I have is the lack of real world empathy our lead, Wade, seems to have. There is a brutal tragic event in the film (which I will not spoil) that should leave Wade, at the very least - affected!

But no. Not so much. The very next scene Wade is ready to Game On!

It seems to me that there is a great movie somewhere in RPO or maybe it’s all there on the cutting room floor. But  instead of delivering that, Spielberg delivered the safest movie possible.

And it’s a very fine safe movie. There are things I like. I honestly believe that most folks who see it will enjoy it. The visual spectacle is such an eye feast that I might actually see it again. Perhaps I will warm up to the supporting cast a bit more. Perhaps not.

Ready Player One is fun, energetic and totally Spielberg. I just wish it had been a little more, I don’t know - wiser. 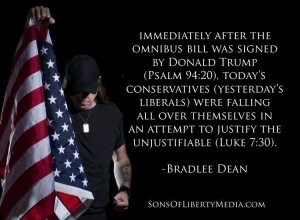 Treason-In general, it is the offense of attempting to overthrow the government of the state to which the offender owes allegiance, or of betraying the state into the hands of a foreign power. –Webster’s 1828 Dictionary

Last week, the news broke that behind the smokescreen of the March on Washington D.C., President Donald Trump did the unthinkable when he signed off on the budget-busting $1.3 trillion spending bill, which is nothing short of a complete betrayal of the American people.  The bill also finances countries that are avowed enemies of America. (Article 3 sections 3 US Constitution) HE SAID THAT IT WAS SIGNED FOR “NATIONAL SECURITY” WHILE FUNDING AVOWED ENEMIES TO AMERICA.

This in part is what we found in the bill:

After reading through the content found in this un-constitutional omnibus bill, I ask, did you vote for this?

Did these treasonous politicians receive delegated authority from “We the People” to implement that which is clearly treasonous? (Article 3, Section 3, US Constitution)

I noticed immediately after this was bill was signed by Donald Trump (Psalm 94:20), today’s conservatives (yesterday’s liberals) were falling all over themselves in an attempt to justify the unjustifiable (Luke 7:30).

One individual named Schlicther said, “I refuse to lose my mind over the omnibus fiasco, and so should you.”

Another person stated, “What Trump said behind closed doors, after signing the bill, and what he just signed are not the same.”  In other words, he didn’t really mean to sign this $1.3 trillion omnibus bill.  Yes he did, because he did it.  Remember, the man in private and the man in the office are one in the same (Luke 6:43-45).

Then we have another who wrote an article titled:

Omnibus Bill: “Trump Outsmarted The Deep States Again, The Wall is Being Built” Really? Friends you cannot make this stuff up! Shameful!  (Jeremiah 3:3)

These people are the problem. Today’s conservatives, or lack thereof, along with the corrupt politicians, at length, are attempting to justify themselves, which neither can (Luke 16:15).

They continue on their little selfish venture of playing the political games that they are willfully caught up in (Jeremiah 5:21).

They refuse to receive correction and then wonder why the politicians do not hold to their oath! (Jeremiah 2:30; Matthew 15:14) If they did, then they would not have to play the hypocrite with the guy wearing their favorite jersey on committing the act of treason.