The eye roll heard 'round China (until it was censored) 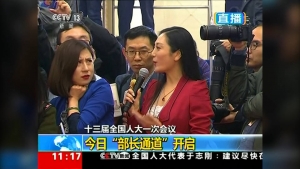 In China, government censors are struggling to keep up with an incident that occurred this week at the National People’s Congress (NPC). Shanghai based reporter, Liang Xiangyi, could not contain her eye rolling disgust at a fellow reporter’s softball question.

As a quick reminder, China is a communist republic. And the state has strict control over what news outlets (and internet outlets) may or may not do or say.

The National People’s Congress is a staged, scripted event where Chinese politician pretend to vote on policy in order to “fool” the world into seeing how democratic they are. The event is carefully choreographed and reporters are specifically selected to ask prepared questions that the delegates can easily answer. Many Chinese are sick to death of state run fakery.

Enter, Zhang Huijun, who works for American Multimedia Television (AMTV), an L.A. based company with ties back to China’s state media. And then, at the NPC, she is called on to ask her question. So, first of all, she is clearly just being called on to make it look as if China is ceding the floor to a “foreign” journalist. So, already - barf! But then, things get a little crazy when delightful Miss Xiangyi, standing right next to Huijun can’t take it any longer.

Liang Xiangyi, can not believe the ridiculously long, softball question posed by Huijun. Seriously, it goes on for forty five second! Which is a ridiculously long time for a live question to linger! (As a note, the carefully scripted response was only half as long as the question). During Huijun’s question, Liang, wearing the blue jacket, looks Huijun up and down like, “Wait! Who the F are you even?” Then, towards the end of Huijun’s tedious and not terribly relevant question, Xiangyi just -  can’t - even. Quickly followed by the epic eye roll, head turn!

The problem here is that Chinese reporters are required to … well … obey. And Xiangyi’s eye roll was captured live on television to a huge audience. And Chinese censors couldn’t have anyone expressing disgust at their fake parliamentary proceedings. They had to do something!

I mean, God forbid anyone see right through their fakery and express disgust.

Well, Chinese censors went to work to scrub any and all bits of the eye roll, but they had a hard time keeping up. Videos of the epic eye roll were seen and shared by millions. Thousands of memes, GIF’s and parodies flooded China’s internet and Miss Xiangyi was bombarded with online support as many Chinese offered a collective, “Yes, we’re sick of state run lies, too!”

I do not speak Mandarin but the NT Times has a nice piece on the event including a full translation of the question.

But still - that eye roll, man.