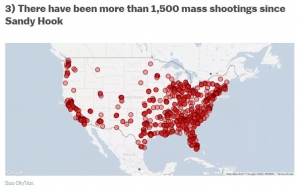 Another 17 children are dead after a mass shooting at a South Florida high school -- another avoidable tragedy allegedly perpetrated by a teenager with an assault weapon who left the following YouTube comment a year ago: "I'm going to be a professional school shooter."

Nikolas Cruz, 19, who was expelled from the school and not allowed on campus with a backpack after being found with bullets on campus, is in custody and charged with 17 counts of premeditated murder. But we saw it coming and still couldn’t stop it. Why? Because it’s way too damn easy to get a gun in this country.

The typical Conservative will tell you there isn’t much difference between the number of mass shootings in America compared to, say, Europe, citing statistics from the Right-leaning, often erroneous and mostly fraudulent Crime Prevention Research Center. They are, of course, wrong. On average, there is more than one mass shooting for each day in America, and there are 29.7 homicides by firearm per one million Americans, according to 2012 numbers. The next most is 7.7 homicides per one million Switzerland residents.

But how do we keep these tragedies from happening? How do we keep guns out of the hands of people like Cruz? Addressing the ease of access to guns is easy. Here’s what I think reasonable, sensible gun control looks like.

The only teenagers owning firearms should be members of the military. If 18 is too young to drink or use cannabis recreationally, then it’s too young to own a gun. Both drinking and using cannabis are less dangerous than firearms. Firearm-related deaths are the third leading cause of injury-related deaths in the United States, and young people are more likely to injure themselves with a gun accidentally. Over 1,300 victims of unintentional shootings from 2005 to 2010 were under 25 years of age, and “such injuries were approximately nine times more common among male than female patients and highest among males ages 20-24.”

I have no problem with children learning how to properly handle, respect and fire a gun or hunt with their fathers and grandfathers. Hell, shooting was one of my favorite pastimes growing up, too, but I was always in the presence of a drinking-aged adult -- even with a BB gun. That should remain the case for those 18 to 20 years of age.

2) Require all gun owners to have health insurance

A recent study released by three researchers at the Johns Hopkins University School of Medicine in October 2017, found the yearly charges associated with treating gunshot patients in American hospitals is nearly $3 billion.

American taxpayers should not have to flip the bill for any uninsured American who shoots him- or herself or someone else unintentionally. As of the 2010 census, there were 234,564,071 Americans over the age of 18. As of 2015, a third of Americans said they owned a gun. That gives us roughly 77,406,143 gun owners in America, and if the current rate of uninsured Americans is 11.3 percent, then roughly 8,746,894 American gun owners are uninsured. Everyday, 46 people are shot unintentionally in America. If 11.3 percent of the responsible parties are uninsured, at $900 per uninsured hospital visit, it results in over $1.7 million taxpayers have to cover annually.

3) Require all gun owners to undergo a mental health evaluation

Since health insurance is now a prerequisite for gun ownership, it shouldn’t be a problem for aspiring gun owners to undergo a mental health evaluation to prove they are not mentally ill or a substance abuser. This would make it more difficult for the mentally ill to obtain firearms and likely lower suicide rates, as “suicide rates are much higher in states with higher rates of gun ownership, even after controlling for differences among states for poverty, urbanization, unemployment, mental illness, and alcohol or drug abuse,” according to the Center for Injury Research and Prevention.

Since the passage of the Paul Wellstone and Pete Domenici Mental Health Parity and Addiction Equity Act in 2008, also known as the Mental Health Parity Law, health insurers are mandated to treat mental health and substance abuse coverage comparably to physical health coverage, so the cost to the aspiring gun owner would be modest.

Mandating that all states require criminal background checks to be conducted prior to the private sale of firearms would make it more difficult for those with a history of violent crime to obtain firearms.

I wrote about this back in October, but in summation, the process of adopting a pet is more thoroughly vetted by adoption agencies than the gun ownership process. Some adoption agencies will request the medical history of every pet you’ve ever had to make sure you’re not an abuser. They’ll ask if you’re gainfully employed, and some will even conduct in-home investigations to determine if your home is a safe place for the pet. Gun retailers aren’t coming to your home to make sure you have a gun safe or even asking if you own a gun lock. They’re not concerned about whether you have a job or a criminal history or the state of your mental health. They just want to sell you a gun.

Obtaining a gun just after the Second Amendment was ratified in 1791 wasn’t easy -- even for the federal government. There were reportedly just two American armories back then. “In an attempt to equip the militias sufficiently to protect the newly independent country, Congress ordered the purchase of 7,000 muskets in 1793. A year later, it had managed to buy only 400,” according to a story in The Economist based on the works of Michael Bellesiles. So back in the day it took almost an entire day just to produce a gun, and that’s combining the production of every gun manufacturer in the country. By 1808, one factory would produce 50,000 barrels, locks, rammers, and bayonets per year in Britain.

When the Second Amendment was ratified, the American forefathers certainly didn’t think assault weapons and rocket launchers would be possible, but they were also working with a knowledge that guns take a long time to produce. They certainly didn’t think there would come a day where there were more guns than Americans.

Since aspiring gun owners would be required to have a mental health evaluation and criminal background check conducted, a 10-day wait period would give them and the seller an opportunity to fulfill those prerequisites. It would also result in fewer crimes of passion, as those without guns looking to acquire guns in a fit of rage would have 10 days to think about the consequences of their intended actions.

Reasonable, sensible gun control starts with enforcing the current laws on the books. This will be easy once the infrastructure is created to allow law enforcement to view whether the gun owner has fulfilled all the prerequisites for gun ownership.