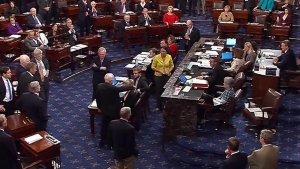 Jason Lewis is the outgoing, Minnesota Congressman who on Veterans Day blamed a recently deceased prisoner of war for costing him reelection and Republicans the House majority in the 2018 Midterm Elections. In his defense, Lewis had no control over the publication date of his op-ed after he submitted it to The Wall Street Journal. Lewis did, however, blame the late Republican Arizona Senator and Vietnam POW John McCain for his election loss and the losses of his fellow House Republicans. It just happened to be published on Veterans Day, which has been the focus of just about everyone on social media.

Most of the media, however, has resisted mentioning the date of publication, but haven’t bothered to check if there’s some truth to Lewis’s claim. McCain couldn’t possibly be entirely responsible for Republicans losing 39 House seats. No single moment, however momentous, decides an election let alone 39 elections. There are a myriad of reasons why people vote the way they do. Money is just one reason.

The biggest spender in House elections won just 89.8 percent of the 2018 House races—down from 95.4 percent in 2016. But the biggest reason House Republicans lost so much in the 2018 Midterm Elections might very well have been because of their support for the American Health Care Act (AHCA) and the failure of Senate Republicans to pass the legislation because of John McCain.

In his ill-timed op-ed, Lewis alleges that the Arizona Republican Senator’s decisive vote against Congressional Republicans’ “skinny repeal” of the Affordable Care Act (ACA), also known as Obamacare, "prompted a 'green wave' of liberal special-interest money, which was used to propagate false claims that the House plan 'gutted coverage for people with pre-existing conditions.’”

Lewis might be absent-minded at best, insensitive at least, and downright disrespectful at worst, but his claim is not entirely wrong. He and fellow Republicans were wrong, however, to assume McCain would vote along party lines when it came to healthcare, even when faced with an opportunity to repeal and replace Obamacare.

Republicans Should have Seen McCain’s “No” Vote Coming

Healthcare has long been a concern of McCain’s. He was an early co-sponsor of the Americans with Disabilities Act of 1990. In 1998, he introduced a bill to regulate the tobacco industry and increase taxes on cigarettes that failed due to opposition from his fellow Republicans. And it took a lot of convincing stories of personal struggle, but in 2001 he joined a bipartisan effort to pass a patients’ bill of rights despite being concerned about the right it gave patients to sue health care companies.

McCain then shocked his fellow party members by running for President on a healthcare platform in 2008. While his opponent adopted a healthcare approach implemented by Republican Governor Mitt Romney in Massachusetts, McCain’s plan would have subjected health insurance premium contributions from employers to income tax. Tax credits would help taxpayers offset the costs of employer coverage or coverage purchased on the individual market, and any remaining funds could be deposited in a health savings account (HSA).

McCain also wanted to allow Americans to buy health insurance coverage across state lines, but he didn’t want government getting its hands on healthcare. He did, however, propose federal funding to help people who couldn’t get coverage through the individual market because of their health conditions, i.e. pre-existing conditions. So protecting affordable access to healthcare coverage for people with pre-existing conditions was important to McCain almost a decade before his decisive vote against the AHCA.

Yet Republicans and Democrats alike were shocked at McCain’s vote to kill his party’s baby that was going to show Republicans’ constituents they finally did what they had long promised: repeal and replace Obamacare. And that might have been enough to carry them to victory in 2018 because the adverse effects of their AHCA predicted by the Congressional Budget Office—including higher premiums resulting from 24 million more Americans going uninsured by 2026—wouldn’t take effect in time for American voters to reprimand them in the 2018 Midterm Elections.

The only problem with the Republicans’ plan was the free press, which informed constituents of the potentially devastating impact of the AHCA, especially for people suffering from pre-existing conditions. In turn, those constituents voiced their opposition to the bill and let their Congresspeople know how many votes they could expect to lose in their next election. Turns out once people got a taste of Obamacare and discovered it wasn’t just nasty, expensive health food but tasty, affordable health food, they started to like it. Why do you think Republican Congresspeople in 14 states continue to withhold Medicaid expansion from their constituents? They say they don’t want to take federal funding for healthcare out of principle, but what they really don’t want is their constituents discovering how much they could be saving on health insurance premiums.

McCain’s “Most Powerful Thumb in the Country”

On July 28, 2017, a week after learning of an “aggressive,” inoperable brain tumor, McCain, reminiscent of a Roman emperor deciding the fate of a wounded gladiator, killed Congressional Republicans’ last-ditch efforts to repeal and replace Obamacare with the "most powerful thumb in the country." It took two other votes from Republican Senators Susan Collins of Maine and Lisa Murkowski of Alaska to kill the American Health Care Act. Any one of the three voting “yes” would have resulted in a tie broken by Vice President Mike Pence.

Andy Slavitt, a former acting administrator of the Centers for Medicare and Medicaid Services under President Barack Obama, called McCain’s “no” vote on the AHCA a “watershed moment in health-care policy” in an interview with the Arizona Republic. But it was also a watershed moment in political policy, too. It was both a reprimand of the Republican Party by a most-respected Republican, and a reminder that people, regardless of political affiliation, are going to do what they think is right. More so than anything, regardless of pre-existing conditions protections, McCain didn’t care for the Congressional Republicans’ process (or lack thereof) to repeal and replace Obamacare. Not allowing the legislation to go through committee and instead forcing it through Congress rubbed the old school Republican the wrong way.

Republican Representative Jeannette Rankin, the first woman elected to Congress and still the only woman elected to Congress from Montana, broke with her party and all of Congress when she voted against declaring war on Japan after the attack on Pearl Harbor in 1941. She was joined by a bipartisan group of 49 House members and six Senators voting against war with Germany 24 years earlier. McCain’s “most powerful thumb in the country” moment was reminiscent of Rankin and is McCain’s most legendary moment. It's for what he'll be most remembered.

There’s no denying McCain’s momentous “no” vote motivated an already energized Democratic Party. Whether it resulted in a “green wave” of donations from those with liberal special interests is debatable. Democratic House candidates received 50 percent more in campaign contributions than Republican House candidates in 2018, but that was paced by individual donations, not special interests represented by Political Action Committees (PACs). Democrats raised twice as much from individuals as Republicans to make up for a $46-million deficit in PAC contributions.

Whether McCain’s momentous vote was responsible for specific donations is impossible to determine, but Democrats did receive 54.7 percent of the $226,586,167 health-related campaign contributions, which was fifth most amongst business sectors in contributions made to 2018 campaigns. That’s actually down from health sector spending on the 2016 election, which saw health as the sixth-highest sector represented by campaign contributions, but nearly 60 percent more than what the health sector spent on the 2014 Midterm Elections.

So McCain’s vote against the AHCA might have been responsible for increased election spending on Democrats from the health sector, but it was absolutely responsible for robbing House Republicans of the ability to run for reelection advertising the fulfillment of their promise to repeal and replace Obamacare. That alone could have been enough to sway the 2018 House Midterm Elections toward Democrats, if they weren’t already swinging that way.

Almost five months before Democrats flipped their first Congressional seat—getting an upset win from Doug Jones over Republican Roy Moore in Alabama’s special election for Senator on Dec. 12, 2017—McCain gave Democrats their first ray of hope since being robbed of the White House by Russian election meddlers assisted, perhaps, by Donald Trump’s Presidential campaign. Whether Trump acted as an accomplice in the confirmed election interference by the Russians could be revealed by Special Investigator Robert Mueller any day now that Trump has reportedly responded in writing to Mueller’s questions.

Both Trump and Pence failed to convince McCain to support the AHCA, with Trump even assuring McCain the bill wouldn’t become law. Trump wasn’t likely considering a “no” vote from another Republican Senator, although that might be exactly what he wanted McCain to think. It’s more likely Trump was told a key provision of the bill would be found unconstitutional.

In his op-ed, Lewis alleges Democrats’ claims that the AHCA “gutted coverage for people with pre-existing conditions” were false. But like Lewis’s op-ed rejecting responsibility for his and House Republicans’ election losses, Democrats’ claims weren’t entirely false. PolitiFact awarded “Half True” ratings to ads and statements from Democrats on healthcare in North Carolina, Wisconsin, Florida, Virginia and California. Why?

The MacArthur-Meadows Amendment to the AHCA was introduced in the U.S. House of Representatives on April 13, 2017. It was meant to coerce the votes House Republicans needed from the Rightest-leaning, three-dozen-or-so members of the House Freedom Caucus in order to pass the AHCA legislation onto the Senate. The amendment introduced by Republicans Tom MacArthur, a former insurance executive and now outgoing member of Congress, and recently reelected Mark Meadows of North Carolina, chair of the House Freedom Caucus, would have effectively gutted coverage for some people with pre-existing conditions.

People suffering from pre-existing conditions who didn’t maintain continuous health insurance coverage for all but 63 days of the prior 12 months would be forced to pay health insurance premiums based on their medical history, which would no doubt be higher than premiums currently available to them. While not every person with a pre-existing condition would be directly affected, nearly a third of people with pre-existing conditions experience a gap in coverage over a two-year period due to job changes, other life transitions, or periods of financial difficulty, according to the Department of Health and Human Services.

Since price most dictates what Americans’ healthcare coverage actually covers, Republicans effectively “gutted coverage for people with pre-existing conditions” by allowing health insurance companies to pick and choose what healthcare services are covered and at what price for people with pre-existing conditions failing to maintain continuous coverage. That’s why PolitiFact awarded “Half True” ratings to all those ads run by or for Democrats.

So while Lewis isn’t entirely wrong about increased campaign contributions being made to Democratic House candidates in 2018, he is wrong in calling it “liberal special-interest money,” as individual donations were the source of Democrats’ “green wave” of contributions, not PACs representing special interests. Whether that increase in Democratic contributions was a result of McCain’s vote against the AHCA is debatable and impossible to determine. And while Lewis claims that money was used to “propagate false claims that the House plan 'gutted coverage for people with pre-existing conditions,’” those claims made by and in behalf of Democrats were at least partially true, making Lewis mostly wrong, but not entirely wrong.

"Disapprove of the president's style if you like, but don't sacrifice sound policy to pettiness," Lewis wrote to close his op-ed, which would have been fitting had the AHCA actually been sound policy. The MacArthur-Meadows Amendment sacrificed any semblance of soundness the AHCA had, so if Lewis wants to blame someone for Republicans losing the House, he might start with the members of the House Freedom Caucus instead of attacking a dead POW of the Vietnam War who can’t defend himself.