If you thought it was bad for journalists in America, it's worse in the EU 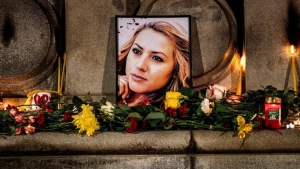 Popular Bulgarian television journalist Viktoria Marinova became the fourth journalist killed in the European Union (EU) since 2017. The 30-year-old was found unrecognizable, brutally beaten while she was raped and then strangled to death.

Marinova had just started her own news talk show called “Detector.” In her final show on Sept. 30, she interviewed Bulgarian journalist Dimitar Stoyanov and Romanian journalist Attila Biro. Stoyanov and Biro were arrested by Bulgarian police while investigating GP Group, a private construction company suspected of carrying out scams with EU funds.

While one journalist from Marinova’s network said they had never received any threats regarding Marinova’s work, Bivol.bg owner Asen Yordanov told Agence France-Presse (AFP) that his journalists had received credible information that they were in danger of being assaulted because of the investigation aired on Marinova’s show.

Police don’t think Marinova’s murder was instigated by her reporting because she was raped, which is already a crime of passion. But if a man was or men were willing to murder Marinova over her work, he or they would have likely been as willing to rape her as murder her, if not more so. It wasn’t long ago that journalist Kim Wall, also 30, was sexually assaulted and murdered after interviewing Danish inventor Peter Madsen.

Wall’s dismembered remains were found on Aug. 21, 2017, 11 days after she interviewed Madsen aboard his submarine. Madsen, 47, said he had planned to murder Wall either by suffocating her or cutting her throat. He was found guilty of premeditated murder and sexual assault after admitting to dismembering Wall’s body and throwing her remains overboard. He intends to appeal the conviction.

Less than two months after Wall’s remains were found, investigative journalist Daphne Caruana Galizia was killed by a car bomb. She was going to the bank to try and access her funds frozen by the Maltese government minister. Her killer remains at large as far as we know.

The latest killing of a journalist in the EU was back in February, when Jan Kuciak, 27, and his fiancé were shot dead in Slovakia. Jan was investigating alleged political corruption linked to Italian organized crime. His unfinished article published after his death alleges that businessmen in eastern Slovakia with links to Calabria's notorious Ndrangheta mafia are embezzling EU structural funds. Kuciak’s murder forced the resignation of Slovakia’s then-Prime Minister, Robert Fico.

Whether Marinova’s murder was “a warning” like Yordanov believes or simply a case of an attractive woman being alone around a man or men worse than animals doesn’t mean there isn’t an active effort to shut up journalists in the EU.

President Donald Trump expressing his disdain for journalists not working for Fox News certainly isn’t making matters better for journalists stateside or otherwise. While the worst attack of a journalist stateside recently is U.S. Representative Greg Gianforte’s (R-Mont.) assault of Guardian journalist Ben Jacobs a day before he WON election, Trump’s words and tweets reverberate internationally. His often-advertised attitude towards people simply doing their jobs of seeking the truth is partially responsible for the deaths of these journalists in the EU.