Opinion: Kanye West might have been 'Sci-Fi' bodysnatched by a white nationalist 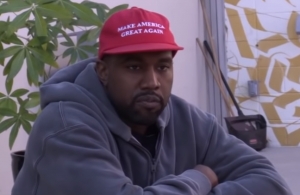 Kanye West is no stranger to controversy. His music talent assures him hall of fame status as a hip hop artist. His marriage to Kim Kardashian is a thing of pop culture legend. And boy does he like to spread his opinion. And his opinions are … well ...

You see - Kanye West loves Donald Trump. His wife does not but whatever. There it is. But now, some of you are saying - “Why is this controversial? Thirty million white people adore Donald Trump.” There being, the rub. Kanye West is a black man who grew up in Atlanta and Chicago with a middle class family. Now he’s a filthy rich hip hop artist. So, obviously - there aren’t too many black hip hop artists that are pro Trump. Why is that? Because many can make the strong case that the modern Republican party doesn’t give a rats ass about people of color. Which is why the crushing, overwhelming majority of black Americans vote against the Republican party and voted against Trump.

Now, Kanye West, rightfully so, responds, “Whatever. No one tells me what politician I can or can not support.” And he’s right. Of course, he is also the famous musician who stood up in front of millions of viewers and said, “George Bush doesn't care about black people” during a live fundraiser for victims of Hurricane Katrina. And he was right then too.

Which belabors the question why Kanye West thinks that George Bush doesn't care about black people but Donald Trump does. Jimmy Kimmel asked him this very question and West’s silence spoke volumes (Kimmel had to cut to commercial due to the silence). When Kimmel came back from commercial, West never bothers to respond and moves on to other topics. About three weeks later at a Chicago radio station West was asked the same question and came up with this:

“I feel that he (Trump) cares about the way black people feel about him. He would like for black people to like him like they did when he was cool in the rap songs and all this, and he will do the things that are necessary to make that happen because he’s got an ego like all the rest of us. He wants to be the greatest president and he knows that he can’t be the greatest president without the acceptance of the black community so that’s something he’s going to work towards.

Does West know this? Is Kanye trolling the world? Is this all a marketing scam to remain in the public eye? I mean, as long as he kicks the hornet's nest he sells more records?  Or something?

Maybe. But his love for Trump does seem sincere.

But that’s not all. A few months ago he said this about slavery to the folks at TMZ,  “you hear about slavery for 400 years. For 400 hundred years? That sounds like a choice. Like, you was there for 400 years with all ya’ll? (Kanye laughs at this point).”

Now, I don’t care how much of a “free thinker” you claim to be, laughing that slavery was a choice is just butt ass stupid. Thankfully, the entire internet beat him up until he backtracked the comment.

And then, just last week he stepped in it again and tweeted a picture of himself wearing a MAGA (Make America Great Again) hat and wrote:

“This represents good and American becoming whole again. We will no longer outsource to other countries. We build factories here in America and create jobs. We will provide jobs for all who are free from prisons as we abolish the 13th amendment. Message sent with love”

Ugh. So much to unpack.

First of all “America becoming whole again.” This is a fine idea. And all good folk should want this. Better said than done, but still.

“We will no longer outsource to other countries. We will build factories here in America and create jobs” This is a fine idea but Kayne West is as fucking nieve as a tiny baby if he thinks his buddy Donald Trump will build American factories.

Don’t get me wrong, I know that Donald Trumps has said over and over that he will bring factories back to the U.S. and nieve folks all across America screamed, “Trump, Trump, Trump!” It was a main platform for Trump in the campaign. MAGA = bring American jobs back!

Here is Jimmy Kimmel ordering a bunch of product from Trump.com and having a hard time finding anything made in the U.S.  But he did find some illegal product that violated U.S. import laws. So, at least there’s that.

In fact, back in July, Trump hosted a White House event to promote American made products and, as you can imagine - the vast majority of Trump products could not be featured at his own event that he hosted to promote goods manufactured in the country where he’s the president.

How bullshit is that?

And you will still find millions of Trump supporting jobless factory workers from small towns all over the U.S. who have been financially devastated when a big corporation closed down the only manufacturing plant in town and moved it overseas to pay workers in Bangladesh ten cents per hour. These are the very same people that chant, “Lock her up! Lock her up!” about Hillary because of - I don’t know, something about her emails.

So, to be clear. If you approve of Trump because you think he’s the president that, as Kanye tweets, will, “Build factories here in the U.S. and create jobs” you’re only fooling yourself.

And finally we get to the last part of West’s tweet, “We will provide jobs for all who are free from prisons as we abolish the 13th amendment. Message sent with love.”

Abolish the 13th amendment? The, um, amendment that … you know - abolished slavery? West wants to get rid of that? WTF?

Well, as you can imagine - the internet went bonkers. Here is a rich, black man writing to abolish the amendment that got rid of slavery. Well, that kind of sounds like something a white, nationalist Nazi would write. You know?

Of course, West immediately corrected himself saying he “misspoke” and that he wants to “amend” not abolish the 13th amendment. Well, fair enough. This makes a bit more sense. His beef with the 13th amendment is with the “unless you are in prison” portion.

As you may or may not know the 13the amendment specifically says,

"Neither slavery nor involuntary servitude, except as a punishment for crime whereof the party shall have been duly convicted, shall exist within the United States, or any place subject to their jurisdiction."

I added the bold, italic as emphiss. To clear up what he meant by the 13th amendment West later tweeted, “In order to make a freed man a slave all you have to do is convict them of a crime.” This, I feel, is a fair point. Kevin Dickinson writing for bigthink.com kind of agrees too in his very nice piece, Kayne West’s 13th amendment outburst was baffling, but worth considering.

A few points he brings up:

“Arizona's Tent City prison was infamous for its inhumane conditions. It was overcrowded, prisoners remained outdoors at all times in the Arizona heat, and many were forced to work in chain gangs for no compensation. Although closed last year, Tent City remained operational for more than two decades...”

He also talks about how enormous amounts of unreported rape happen behind bars and posits that this could be considered a form of sexual slavery especially if the prison guards know about it and don’t do anything to interfere. Well, the 8th amendment provides protection against cruel and unusual punishment. So, maybe it should all tie together and the 13th amendment could be revised slightly to end for profit prison slaves. Agree with it or not, it’s a fair point.

Of course, West doesn’t suggest out “how” the 13th amendment should be amended only that it should be. Which is fine. There are lawyers for that. But still I mean, that’s the whole point of the Constitution having amendments - so that it can evolve over time.

Okay. So, despite some of the crazy things Kanye has said in the past (and will say in the future), I’m giving him a pass on his 13th amendment tweet. I believe he honestly meant amend and not abolish.

But, Kanye - all that other “Trump is going to bring factory jobs back to the U.S.” - what bloody alternative universe do you live in, man?