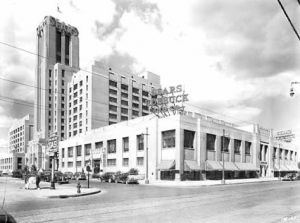 On Monday morning sources around the country reported on the Sears bankruptcy. But that doesn’t mean the company is out of business. Well, not yet anyway. It’s a good ol’ fashioned restructuring type of bankruptcy. I don’t believe that many feel the restructuring will work but there it is.

There is blame o’plenty. Current CEO Eddie Lampert blames Sears retirees. Analysts around the globe blame the CEO for his bad decisions not committing to online sales. Common sense and reason suggests that Walmart and Amazon gobbled up Sears customers like an old school game of Pac Man. It might even have been because of that time in 2003 when Sears sold its highly lucrative credit card business to Citigroup. No, seriously, that credit card business was more than 50% of the company’s profits. And they sold it off. *shrugs*

Anyway. It was probably a giant mixture of events that led Sears to inevitable bankruptcy after 130 years in business. CNN interactive made a really nice timeline of the company leading up to Monday’s announcement.

This all seems eerily familiar to my childhood. I grew up in MPLS, MN and we had a huge Sears building on Lake Street, kind of midtown Minneapolis. And I spent many an hour walking those retail halls or getting my keys made there or wondering why we could only shop on floor 1-3 but the building clearly had several stories above those - what was happening there? I even have fond memories of scrolling through the Sears catalog and circling all the toys I wanted for Christmas. Our Sears building closed down in 1994 and was eventually declared a national landmark building. Then in 2006 it was reopened as the Midtown Global Market with apartments and condos above. I’ve also spent many an hour eating and drinking at the Midtown Global Market so it all came full circle for me.

For the Sears company however, it all came down to that $134 million dollar payment they had due on Monday. And they couldn’t afford to make it. Hence the bankruptcy and restructuring.

Everything Sears seems to be fading fast. Even the famous Chicago Sears Tower, at once the tallest building in the US, was eventually bought and renamed the Willis Tower. The only silver lining here for Sears - I’m pretty sure everyone in the world still calls it the Sears Tower.

Again, this isn’t the end for Sears (yet) but the company does plan to close more than a hundred underperforming stores.