Opinion: President Trump's State of the Union speech will be more of the same bombastic idiocy we've come to expect 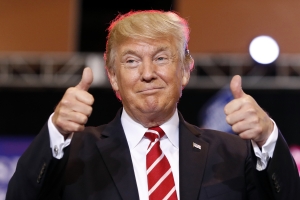 President Trump will deliver his first State of the Union speech tonight, Tuesday the 30th at 9:00pm (Eastern).

I will go out on a limb and proclaim the speech will be filled with lies, rhetoric, childish insults and insanely unrealistic predictions of what the President himself can accomplish.

He is, after all - by his own admission - the greatest. At pretty much everything.

His bombastic nature alone should turn the majority of reasonable folks off. But it doesn’t. There are plenty of poor, working class folks in small towns all round the country who actually believe that billionaire Donald Trump is going to somehow magically transform their lives for the better.

They are welcome to their dreams. They are welcome to continue to vote against their economic interests, too. And Donald Trump will continue to ignore them. Actually, “ignoring them” is probably giving the President too much credit. Ignoring them would mean he actively thinks about them and then makes a decision to not help them. Donald Trump does not give a rats ass about impoverished small towns. At all. He does not think about them. At all.

Though, to be honest - when was the last time you heard of the Democrats doing much to improve the lives of impoverished small towns?

The DFL is supposed to stand for Democratic Farmer Labor party. Well, the DFL, to my knowledge, certainly supports Labor rights. I doubt they’ve done much for small farms in the last fifty years. When asked about this very subject, DFL chairman Ken Martin says to MinnPost.com,

“The ‘F’  matters to us. The ‘F’ for us is fighting for the family farm; fighting for the little guy. ... But I’m not going to lie to you. It’s difficult right now. Young people can’t afford to get into farming anymore. It’s big agri-business now and that’s changed the face of the rural areas of the state.”

And if young folks can’t get into it - it’s a dying business.

All I’m really saying is the DFL used to take care of farmers but now it seems that rural areas have been overwhelmingly Red States for decades. During the campaign Donald Trump said to West Bend, a small town north of Milwaukee:

“I am fighting for you. When we talk about the insider, who are we talking about? It’s the comfortable politicians looking out for their own interests. It’s the lobbyists who know how to insert that perfect loophole into every bill. It’s the financial industry that knows how to regulate their competition out of existence. The insiders also include the media executives, anchors and journalists in Washington, Los Angeles, and New York City, who are part of the same failed status quo and want nothing to change.”

And something about Hillary Clinton’s emails.

The State of the Union will be nothing new. President Trump will continue to say the things he always does, “I’m the best. I’m the smartest. I fight for the little folks. I’ve cleaned the swamp. I win. You win. We all win together. You will not find another person who respects women more than I but Rosie O'Donnell is a big fat lezbo pig. My vocabulary is the "bestest there is" and I didn’t have sex with that porn star and pay $140k to cover it up. I was married at the time. I would never cheat on my wife. The democrats are evil. Make America Great.”

There it is. His legit speech, tonight at the State of the Union. You read it here first.

As for the wide spread impoverished rural community that voted him into office, I honestly feel bad for you because you literally have no one looking in your direction and offering help. Not the Democrats. Not the Republicans. And certainly not President Donald Trump.

Bernie Sanders probably would have though.