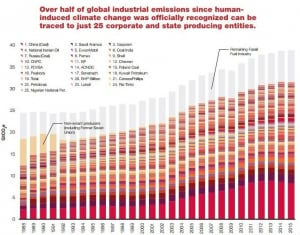 According to the CDP Carbon Majors Report released in July of 2017, “investors in fossil fuel companies carry influence over one fifth of industrial greenhouse gas emissions worldwide.” There’s a very good chance your investment portfolio includes the ticker symbols of some of the biggest contributors to climate change, and with the largest greenhouse gas emitter, Saudi Aramco, opening up its initial public offering to foreign investors, it’s time you knew the ramifications of giving these companies your money.

Of the 30.6 gigatons of equivalent carbon dioxide of operational and product greenhouse gas emissions from 224 fossil fuel extraction companies, 41 percent are either public- or private-investor owned. While another 59 percent are state-owned, there’s not much you can do about those emitters unless you live in those countries. But you can withhold funding from publicly-traded companies looking to use that money to further sully the Earth, and 20 percent of global industrial greenhouse gas emissions comes from companies owned by public investors, which will grow significantly with the addition of Saudi Aramco as a publicly-traded entity. Saudi Aramco was responsible for 4.6 percent of greenhouse gas emissions in 2015.

The best way you can curb climate change is to not give or loan your money to these carbon-emitting companies. If you can’t afford an electric vehicle, you still have to fill the tank, but perhaps instead of filling your tank at the nearest or cheapest gas station, you fill it at the gas station owned by the company that emits the least carbon, which is likely Conoco in the United States.

According to the CDP report, ConocoPhillips was responsible for 61 percent fewer greenhouse gas emissions than ExxonMobil, half the emissions of BP, and emitted 40 percent less carbon dioxide than Chevron in 2015. So buy your fuel at ConocoPhillips’ stations if you can and Chevron if you can’t. If neither are available near you, Shell seems to be working the hardest toward a low-carbon, energy policy globally. Phillips 66 is doing the least.

With enough people boycotting the purchase of shares in corporate carbon emitters, these companies will be forced to change their approaches. So here are the publicly-traded companies to avoid supporting financially.

Saudi Aramco is responsible for almost twice as much greenhouse gas emissions as the next biggest emitter in the CDP report. When it comes to polluting the Earth and warming the planet, no one does it like Saudi Aramco.

But even Saudi Aramco is planning for life after oil, investing $20 billion to construct the largest chemicals facility in the world. The move is in tune with the wishes of Saudi Arabia’s Crown Prince Mohammed bin Salman, who would like to see the country wean off its “dangerous addiction to oil.” Still, investing your money in what is likely to be the biggest initial public offering in history is an investment in the destruction of Earth.

Gazprom is the largest natural gas company in the world and is tasked with providing most of Russia and some countries of the former Soviet Union with natural gas. It controls one quarter of the world's known natural gas reserves and accounts for eight percent of Russia's gross domestic product. But international sanctions have cut into the success of Russian energy companies since the country’s annexation of Crimea, so Gazprom isn’t exactly a safe investment. It certainly isn’t a safe investment for Earth.

Coal combustion is generally more carbon intensive than burning natural gas or petroleum for electricity, which is why Coal India easily makes this list. Although coal accounted for about 70 percent of CO2 emissions from the electricity sector, it represented only about 34 percent of the electricity generated in the United States in 2015. In India, more than 75 percent of electricity came from coal in 2014 -- up from 67 percent in 2011 and at an all-time high.

India is working its way off coal just as Saudi Arabia is looking to lessen its dependence on oil. Research from The Energy and Resources Institute (TERI) suggests that India can cut its CO2 emissions by up to 10 percent or 600 million tons after 2030 if renewable energy and batteries become less costly than coal within 10 years. An investment in Coal India is a sucker bet.

Shenhua Group is a Chinese coal company, where 72.63 percent of electricity came from coal in 2014 -- down from an all-time high of 80.95 percent in 2007. It’s another sucker bet, as China is ahead of schedule when it comes to curbing carbon emissions.

Rosneft is a Russian oil and gas company. Again, sanctions have limited the success of Russian energy companies, so you wouldn’t want your money behind them regardless of their damage done to Earth.

ExxonMobil is selling itself as an innovator in energy solutions and biofuels, but it also spent almost $31 million supporting organizations that spread climate change denial propaganda between 1998 and 2014. ExxonMobil reportedly spends $27 million annually to oppose climate policy as of 2016. It’s the largest carbon emitter amongst the gasoline companies and that should be all you need to know.

Shell was second to ExxonMobil in dollars spent to oppose climate policy with a $22-million annual budget. It even made a film warning of climate change in 1991 but did not heed its own warning so it could reap the benefits of increased profits. Of the energy giants, though, Shell and Total are the only companies to receive a “D” rating from InfluenceMap when it comes to transitioning to a low-carbon, energy policy globally. ExxonMobil, ConocoPhillips and Chevron all received “E-” ratings.

We all know BP for spilling 210 million gallons of oil into the Gulf of Mexico and killing 11 people at Deepwater Horizon -- the largest oil spill in history and eight to 31 percent larger than the next largest. In September 2014, a U.S. District Court judge ruled that BP was primarily responsible for the oil spill because of its gross negligence and reckless conduct, and in July 2015, BP agreed to pay $18.7 billion in fines -- the largest corporate settlement in U.S. history.

Peabody is a coal company based in St. Louis, and as less and less American energy is produced by coal, Peabody’s stock price will fall more and more. Just 34.34 percent of America’s energy production came from coal in 2015 -- down more than five percent over the course of a year.

Petrobras is Brazil’s largest oil and natural gas company and is dirty in more than one way. It paid $2.95 billion to settle a U.S. class action corruption lawsuit at the beginning of 2018 -- the largest settlement paid to the United States by a foreign entity. The settlement was six times more than it has received so far under a Brazilian probe into bribery schemes that involved company executives and government officials.

Shares of Chevron have increased nearly 30 percent in the last six months, so there will be no bargain for buyers of CVX now. Worse yet, its $34-billion project in Western Australia could face tougher emissions curbs, which would increase costs and sink shares.

Gross profits of the state-run, Malaysian oil and gas company have decreased over the last three years in all divisions -- gas processing, gas transportation, utilities and regasification. And its Sabah-Sarawak Gas Pipeline transporting liquid natural gas sprung a leak on Jan. 10. A 2015 report found that there’s enough natural gas leakage to outweigh the climate benefits of using natural gas instead of coal.

The Democratic Republic of Congo forced Glencore’s billionaire head of copper into a smaller role after a review raised questions about accounting and management, but Congo’s doubling of taxes on cobalt will hurt Glencore even more.

How much Koch Industries actually pollutes Earth is difficult to determine, as Koch is privately owned and exempt from risk disclosures required of publicly-traded companies. Multiple estimates have Koch Industries at 300 million tons of CO2 emissions annually, but the Kochs do more to obstruct policy addressing climate change than anyone.

InfluenceMap ranked Koch Industries dead last in its readiness for a transition to a low-carbon policy globally. The Koch Brothers also contribute more to climate-change-denying candidates than anyone else. They budgeted for $889 million in campaign contributions to Conservative candidates in 2016 and are planning to spend up to $400 million during the 2018 midterm elections.

You can avoid giving Koch Industries your money by avoiding the companies it owns, like Vistra Energy Corp. (VST), of which it holds nearly five million shares. Vistra is a Texas energy company.

The Australian-English company is the world’s largest mining company.

The French, multinational, “Supermajor” oil and gas company was fined $313,910 for air emissions violations at its Port Arthur refinery in Texas just under a week ago, and this after the Clean Power Plan was mostly repealed.

Arch Coal is an American coal mining and processing company. They burn coal.