The greatest day in Minnesota sports history, until next Sunday 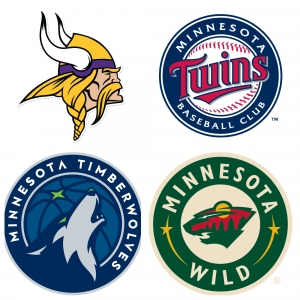 For the first time in a long time, the Minnesota Vikings gave fans joy instead of pain in January. Immediately dubbed the “Minneapolis Miracle” by KFAN play-by-play broadcaster Paul Allen,  Stefon Diggs soared for Case Keenum’s Hail Mary pass on a play called “Seven Heaven” and ran it in for a 61-yard touchdown with no time left on the clock to beat New Orleans and advance to the NFC Championship Game. But the Vikings weren’t the only team in Minnesota playing big games in January. Both the Wild and Timberwolves were in action on Sunday, and both are in contention.

Minnesotans aren’t used to their professional sports teams being competitive. Hell, they aren’t used to their professional sports teams staying in Minnesota. Minnesota has never had a football, hockey and basketball team (and baseball team, technically) in contention this far into their respective seasons as it has in 2018. With the Wild on a five-day bye and the Wolves just a half game behind San Antonio for third place in the Western Conference, Minnesota will be making history every day the Vikings survive. For the first time ever, Minnesota has championship caliber teams contending in all four major, American sports.

Minnesota had two sports teams in contention in January of 2005, and if it weren’t for the NHL strike that cost us all the 2004-05 season, Minnesota would have likely had three contenders at once. The Vikings advanced out of the Wild Card round by winning in Green Bay, but lost in Philadelphia in the Divisional Round on Jan. 16. The Timberwolves entered that day 18-17 and second in the Northwest Division. The Wild were 30-29-20-3 the previous season and then 38-36-8 in 2005-06.

On the same day the Vikings were shutout by the New York Giants in the NFC Championship Game in 2001, and the Timberwolves were running fifth in the Midwest Division with a record of 21-17. The Wild, however, entered Jan. 14, 2001 with a record of 14-19-8-2 -- last in the Northwest Division and tied for second to last in the Western Conference. The Timberwolves went onto the playoffs; the Wild did not.

In January of 1988, the North Stars were bringing up the rear in the Norris Division and sitting second to last in the Clarence Campbell Conference while the Vikings were going into the NFC Championship Game they’d lose to Washington. The Timberwolves didn’t exist.

On Jan. 11, 1970, the Minnesota Vikings were blown out by the Kansas City Chiefs in the Super Bowl while the North Stars entered play with a record of 9-15-13, good for third in the West Division but worse than every East team. The Minneapolis Lakers, though, had already been the Los Angeles Lakers for a decade. They were 21-22 at that point in the season, en route to the playoffs.

Exactly How Futile have Minnesota Professional Sports Teams Been?

The last time any local fan base had contenders in all four major, American, professional sports in January was just last year. As the New England Patriots marched toward another Super Bowl win, the Boston Celtics were running third in the Eastern Conference and the Bruins were second in the Atlantic Division. Both the Celtics and Bruins went onto the playoffs. The Red Sox went on to the playoffs, too, and as of April 23, Boston still had a chance to win all four major, American, professional sports championships in the same calendar year.

Before that, the Pittsburgh Steelers and Penguins won their respective championships in 2009, but didn’t and still don’t have a professional basketball team to continue the Steel City’s dominance.

The last and only time a local fan base enjoyed winning championships in three of the major, American, professional sports was in 1935, when the Detroit Lions, Red Wings and Tigers all won their respective championships. The Detroit Pistons didn’t exist.

No local fan base has enjoyed winning championships in all four of the major, American, professional sports in the same calendar year. But things are lining up well for Minnesota, as Minneapolis hosts the Super Bowl this year, and the Vikings opened as 3.5-point favorites on the road at Philadelphia in the NFC Championship Game.

If the Timberwolves can secure the three seed in the Western Conference, they could avoid playing Oklahoma City and Golden State in the NBA Playoffs, increasing their chances of winning an NBA Championship against a less competitive Eastern Conference.

The Minnesota Wild aren’t even in a bad position with the top Wild Card spot in the Western Conference. They’d visit nearby Winnipeg in the first round of the playoffs and just beat them 4-1 on Saturday.

The Twins are also gearing up for a run at a championship by bolstering their bullpen. The addition of Fernando Rodney and, surprisingly, Addison Reed, to the backend of the bullpen will push guys like Taylor Rogers, Tyler Duffey and Ryan Pressly into lower leverage situations. If they can land the top free agent starter on the market, Yu Darvish, to go along with Jose Berrios and Ervin Santana, they’d be legitimate contenders, regardless of Miguel Sano’s status given sexual assault allegations against him.

As it stands, Minnesotans are enjoying the best days in the history of Minnesota sports and will continue doing so for as long as the Vikings allow.