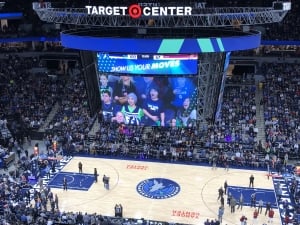 The Minnesota Timberwolves dominated the Cleveland Cavaliers at Target Center on Monday night with local product Tyus Jones starting at point guard in place of the injured Jeff Teague. The Wolves led by as many as 41 points, as Jimmy Butler shut down LeBron James for his seventh straight win against James’s teams. It resulted in James’s worst plus-minus of his career (-39) and lowest-scoring game in a decade. Not a single Cavs starter had a positive plus-minus in the game.

Meanwhile, every Wolves starter finished with a plus-minus over 30, and Jones finished behind only Butler for the game high. While he had just six points in 28 minutes, Jones added eight assists, two steals and only one turnover. On the season, Jones sits behind Karl-Anthony Towns with the 23rd-best real plus-minus in basketball at 3.45. Teague, on the other hand, is 163rd with a real plus-minus of -.29 -- right behind former Timberwolf Kris Dunn. So is Tyus Jones making Jeff Teague expendable?

What have you done for me lately?

Over the last 15 games, the Timberwolves have the best offense, best net rating and the eighth-best defense in the league. Teague has missed seven of those games, but prior to going down with an MCL sprain, the Wolves were riding a five-game winning streak.

The Wolves are clearly benefiting more from Jones’s defense than Teague’s offense. Teague is a game-time decision on Wednesday when the Wolves host the Thunder, so if he doesn’t play we’ll get a chance to see how Jones fares against one of the best point guards in the world in Russell Westbrook.

Regardless of who plays, Wednesday’s matchup with OKC will be a better test for the Wolves than the Cavs were, and give us all a sense of who would win a potential playoff series between the two. Minnesota would have home-court advantage against the Thunder in the playoffs if the season ended today, and with two wins over OKC already, a win on Wednesday would improve Minnesota’s tiebreaker advantage, too.

What could trading Teague do for the Wolves?

Tom Thibodeau has put the Wolves in a tight salary cap situation. ESPN NBA front-office expert Bobby Marks crunched the numbers and found the Wolves will have just $6 million to spend on four roster spots next season if nothing else changes. So dumping Teague’s salary would put the Wolves in a better place financially, but who would take him?

My NBA front-office expert and cousin said he’d work with Phoenix to acquire Tyler Ulis to backup Jones because Towns called Ulis the best passer with whom he’s played. But no acceptable trades between the Wolves and Suns involving Teague has the Wolves improving their win total according to ESPN’s NBA Trade Machine. (Trading Aaron Brooks for Ulis was an acceptable trade that resulted in no change in wins for either team.)

Minnesota’s trade chips are just making too much money, so a third team would likely be required to make a trade of Teague possible. That said, it just doesn’t look like the Timberwolves are in a position to improve the roster through a trade of Teague – at least not at this time.

But if the Bulls intend to shop Nikola Mirotic after Jan. 14, you have to believe Thibodeau would be happy to acquire his services. Mirotic is 14th amongst power forwards in real plus-minus. He’s Taj Gibson’s complete opposite, so when the Wolves struggle on offense, Thibodeau could substitute Mirotic for Gibson to get a bucket. If it takes Teague to get him, so be it, but whether the Bulls would be willing to part with Mirotic for anything but youth and cap space is the real question. The Bulls aren’t that far away from competing now that Zach LaVine is close to returning from injury, and Lauri Markkanen seems to be working out, so don’t be surprised if the Bulls covet a veteran point guard to mentor Dunn.