Opinion: Cheating Red Sox should replay game if it could decide AL East 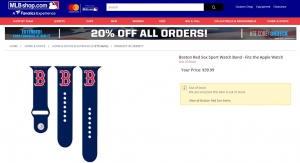 The reeling Boston Red Sox are doing everything they can to hold off the New York Yankees in the American League East playoff race, including cheating. The Yankees have long suspected the Red Sox of stealing signs, and according to ESPN’s Buster Olney, the Red Sox have finally been caught “red-handed,” or in this case, red-wristed.

This was originally published on FoulPlaybyPlay.com, a community for foul-mouthed, sports broadcasters and bloggers.

The Yankees suspect the Red Sox have been using an Apple watch to relay signs from the video room to the dugout. A member of the Red Sox organization reportedly watched video of opposing catchers flashing signals to pitchers. That person quickly decoded the sequence that signifies which pitch would be thrown. Then the information would be texted to Red Sox assistant trainer Jon Jochim’s Apple watch, who relayed the information to Red Sox batters. So with a runner on second, the Red Sox runner would look in at the catcher and relay to the batter what pitch was coming. The most common response on Twitter was the surprise that the Red Sox had found a use for the Apple watch, but the results are no laughing matter.

Keep in mind that the only thing making the Red Sox guilty is the use of technology to steal signs. Had the Red Sox successfully stolen signs without the Apple watch, they’d be revered in baseball circles. Instead, they could be facing a fine, the loss of a draft pick and possible suspension of their assistant trainer. That’s a paltry penance for a team who could win the pennant thanks to its cheating.

A game in Boston on Aug. 18 could have been decided because of the transgressions of the Red Sox. During a pitching change, Red Sox catcher Christian Vasquez, who was at second base, reportedly received signs through Jochim that he relayed to the Red Sox batters. The Red Sox would go on to score four runs in a 9-6 comeback win over the Yankees at Fenway Park. The Yankees are just 3.5 games back in the AL East, and could be 2.5 games back or less had it not been for the Red Sox cheating.

Did the sign stealing work for the Red Sox in any other games? It’s difficult to determine, but judging from the numbers, it seems the Red Sox didn’t bother changing their ways while the investigation was ongoing.

The AL East could come down to that one game the Red Sox stole on Aug. 18, and if the Yankees and Red Sox finish the season separated by just one game or less, the Yankees should be allowed the option to replay the Aug. 18 game at Fenway Park. It will be a nice addition to the schedule since Major League Baseball didn’t think anyone would want to watch the Yankees and Red Sox play in September. The Yankees could end up winning the division and forcing Boston to play the Wild Card game. New York holds a 11-8 record against Boston this season, so an AL East tie would break the Yankees’ way.

Demanding the game be replayed could end up hurting the Yankees if they are indeed out of the AL East race and have to play a Wild Card game immediately after the replay game. So offering the option to replay the game is the best way to reward the slighted Yankees and punish the cheating Red Sox. If the Yankees decide against replaying the game, MLB commissioner Rob Manfred can still fine or suspend the Red Sox or take a draft pick or two. But an instance of cheating that could have decided multiple games deserves a more immediate punishment than the St. Louis Cardinals got for hacking the Houston Astros’ player database. That didn’t decide any ballgames or a pennant race.