Tripping Out on Summer 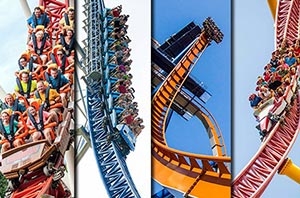 Been to America's Roller Coast? That's where my daughter, Alexis, and hubby, Carmine, took a road trip this week. They check in LIVE from Cedar Point in Sandusky, Ohio on this week's show. It’s the only amusement park in the world with five roller coasters taller than 200 feet! These two thrill seeking newlyweds just got off one. As a neurotic mother, I’m thinking, "Couldn’t they just fool around at ground level at home?"

Who knew that Cedar Point is the most visited seasonal amusement park in the United States. An estimated 3.6 million visitors went in 2016. I would have posted the video Carmine sent me of them in real time riding one of those major roller coasters but there's some adult language at the beginning, so I couldn't . There are 17 roller coasters at Cedar Point but four are action park favorites – Maverick, Millennium Force, Valravn and Top Thrill Dragster. Carmine and Alexis check in with Top Thrills from Cedar Point at the top of the show today. Very funny.

Speaking of funny – I had a big, fun, hilarious, random run-in this past week! Who didn't love Cindy Williams as "Shirley Feeney" in Laverne & Shirley? Or as 'Laurie Henderson' in the film American Graffiti? Cindy's latest riot of a role has her on stage in Las Vegas in Menopause The Musical, and she's on the show this week along with producer Kathi Glist of GFour Productions.

Cindy's still HOT (like the rest of the cast). Thanks to my Aunt Linda (upper row on left facing you), I met Glist (in between Aunt Linda and me), and we're posing behind Cindy Williams (bottom row center) and two of the four super-talented cast members who had me crying with laughter and in awe of their talent.

To the credit of Kathi Glist and GFour Productions, Menopause The Musical is "The Longest Running Scripted Musical In Las Vegas History." Now playing at Harrah's 350-seat Improv Showroom, eight shows per week, 52 weeks per year. The show has also played to 11 million audience members in 13 countries, 350+ cities and has been translated into five languages, and it just keeps going. HOT is worldwide! Fun to see how many men truly loved this show, too.

The hilarious musical parody is staged to classic tunes from the '60s, '70s and '80s. Set in a department store, four women with seemingly nothing in common but a black lace bra on sale, come to find they have more to share than they ever imagined. The cast makes fun of their woeful hot flashes, forgetfulness, mood swings, wrinkles, night sweats and chocolate binges. A sisterhood is created between these diverse women as they realize that menopause is no longer "The Silent Passage," but a stage in every woman’s life that is perfectly normal.

GFour Productions also launched the Survivor Tour to benefit the Susan G. Komen Foundation. The musical has raised more than $1 million for charitable partners. It's a must-see if you're in Las Vegas, or check here to see when the show will be in your town.

You can tune into “The Debbie Nigro Show” at GCNLive.com on Saturdays at 2 p.m. CST by visiting here.