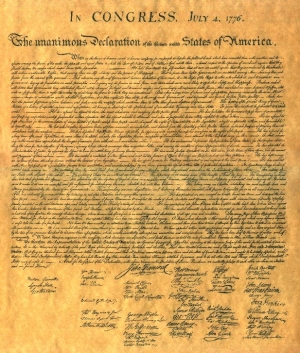 Which is my choice. I have come in on a national holiday for the sole purpose of entertaining you. The dear reader. On a day, traditionally, where pretty much no one reads news.

That’s just how I roll.

Um, that’s great. So why are you here, then?

Because it’s the Day of Independence. We get plenty of the 4th of July in movies and they usually revolve around alien invasions or overly patriotic war movies. To celebrate the day -- some of us watch fireworks. Most of us eat -- like, a lot. Case in point, when I leave work I will attend two separate grilling events! Because the 4th of July, like many holidays, has been watered down to mean nothing more than food (and in this case -- fireworks).

But it’s not just a day to eat fine grillery and to watch fireworks with kids. It’s also the celebration of the exact date when members of Congress signed the Declaration of Independence way back in 1776 and began the Revolutionary War!

That sounds suspicious. And anti-American. What are you talking about?

Well, we celebrate the signing of our Independence on July 4th, so it would reason that the signing happened on -- well -- July 4th. But that’s a bit historically unclear. In 1776, the legal separation of the Thirteen Colonies from Great Britain occurred on July 2nd, not the 4th. Then, Congress debated the wording of the Declaration of Independence for two days, finally approving it on July 4th. John Adams, one of our fine founding fathers, wrote to his wife Abigail:

“The second day of July, 1776, will be the most memorable epoch in the history of America. I am apt to believe that it will be celebrated by succeeding generations as the great anniversary festival. It ought to be commemorated as the day of deliverance, by solemn acts of devotion to God Almighty. It ought to be solemnized with pomp and parade, with shows, games, sports, guns, bells, bonfires, and illuminations, from one end of this continent to the other, from this time forward forever more.”

Okay. So Adams thought we should be celebrating on July 2nd, not the 4th. To further complicate matters, most historians conclude that the Declaration was not actually signed -- until nearly a month after its adoption, on August 2nd, 1776.

So maybe we should celebrate on August 2nd?

To even further complicate matters -- the Colonies had already been at war with the British for a year! Which means the Revolutionary War began before Congress formally declared independence. Perhaps we should celebrate Independence Day on the first day of the Revolutionary War, which would be -- The Shot Heard Round the World -- on April 19th, 1775?

So it’s all a little murky and for some reason we have latched onto July 4th as the day, and that’s what it shall remain for as long as we are around. For better or worse, Brexit 1776 is now, and forever will be -- that 4th day in July.

And to that I say to you -- Happy Independence Day. On July 4th.

Uh-oh. You’re going to end with something depressing, aren’t you?

Well, we should also try to remember that any country's independence is filled with, not just patriots and parades, but also fraught with death and bloodshed. Or in the case of our country -- genocide and slavery. I am not trying to push a moral platitude, just a reminder that there is always a price.

The founding fathers politically paved the way for our independence. I also believe that the disenfranchised, the downtrodden and the displaced are as equally as responsible for our independence, since we built the country on their backs or on their graves. I wish I could offer them more than empty words. And fireworks.