What to do in lieu of fireworks on Independence Day 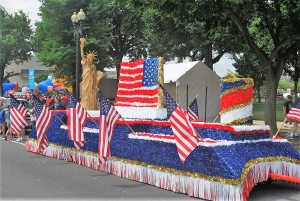 If you live in western America, fireworks might be banned due to fire restrictions in your area. I know you can’t even buy fireworks in my hometown this year because of the high fire danger due to an extreme drought in Eastern Montana.

Just because there are no fireworks doesn’t mean you can’t celebrate Independence Day, though. There’s plenty you can do with your day off that is still patriotic while being less flammable and less expensive. Here are a few things you can do in lieu of fireworks on Independence Day.

Thanks to social media, it’s never too late to host a party. You can create an event on Facebook or Google+ in minutes and have people over for fun and games. Have guests bring an item for a potluck. Hit the local store and buy some party favors in red, white and blue.

Play Bocci or do something truly American and throw a baseball around or shoot some hoops. You can even spray paint a Twister board on the lawn in non-toxic, red, white and blue marking chalk. Yard games like cornhole and the ladder golf ball toss are fun for kids and adults alike, and you can make them yourself at home and have them ready overnight. My favorite and the favorite of our family’s is the “original” washer toss game. It’s a pair of carpeted boards with three holes into which you toss large washers from 10 feet away. Some call it Texas horseshoes apparently. Follow the links to do it yourself.

If you still want that feeling of American patriotism flowing through your veins that only exploding artillery provides, go down to the local gun club or shooting range and fire off a few rounds in succession. Print some fun targets like Osama Bin Laden’s face or a poster of his entire body and tape it together. Then unload like you’re fighting for America’s independence all over again. I assure you this will help you forget about there being no fireworks.

I know what you’re thinking: “The last thing I want to do with my day off is work.” But volunteering to help a fellow American who’s less fortunate enjoy Independence Day is far more fulfilling than fireworks. Here are some volunteer events happening in America on the Fourth of July.

You could also help out a military family in your neighborhood. Feed them lunch or put together a care package for a member of your community who’s serving overseas. You can even write them a letter, or write a letter to the family of a veteran who was lost to a war or conflict. Visit the local nursing homes and speak to a veteran, or visit a VFW or American Legion club and buy a veteran a drink.

Parades happen almost everywhere in America on the Fourth of July. Chances are the main street in your town will be shut down for an Independence Day Parade. Check it out. You’ll score a bunch of free schwag and candy and the kids will have a blast.

6. Attend a fireworks display in the area

If you must have your fireworks then you can get in the car and drive. Just because fireworks are banned where you live doesn’t mean there isn’t a fireworks display nearby. In the case of Eastern Montana, that’s exactly the case, though. But for others, you might be just a few hours away from a fireworks display. Use this map to find one in your area. Searching “fireworks displays near me” on Google will also give you more local options.

So that's what to do in lieu of fireworks on Independence Day. Don’t let the lack of fireworks get you down and take action now to make this Fourth of July one you and those around you will never forget.