A Politician is a Fellow Who Will Lay Down “Your” Life for His Country! 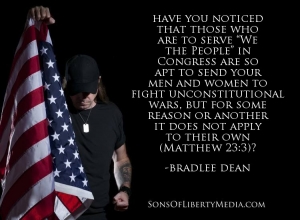 “Our boys were sent off to die with beautiful ideals painted in front of them. No one told them that dollars and cents were the real reason they were marching off to kill and die.” General Smedley Butler

Did you ever notice that the politicians that talk much of war are those who have never been to war.

Or have you noticed that those who are to serve “We the People” in Congress are so apt to send your men and women to fight unconstitutional wars, but for some reason or another it does not apply to their own (Matthew 23:3).

As a matter of fact, it has been said that the Vietnam War ended when the children of those who represented us were pulled up for the draft.

Furthermore, to add insult to injury, it seems that trees take precedent over human life.  When you go to Washington D.C., you see trees with fences around them that state “Tree protection: KEEP OUT! Do Not Enter.  The enclosed area is a tree root protection zone. Fence must remain closed at all times.”  They are simply protecting trees from the people (Romans 1:28).

What you do not see is the Vietnam Wall (my cousin was killed in Vietnam) 20 yards behind this sign.  Fifty-eight thousand, three hundred and eighteen were killed (Amos 4:10).

With the last 100 years of exposing the corruption of the American politician, you would think that Americans would understand that they CANNOT trust the Judases who they are led to believe actually work for the people of this country (Luke 22:48).  Especially, when it comes to war.

In contrast, how was it that during the Revolutionary War, the Forefathers thought it their duty to fight the wars in which they believed were worth fighting, which established our Constitutional Republic.

It was said of George Washington, “First in war, first in peace and first in the hearts of his countrymen.”

Why first in the hearts of his countrymen? Because he led by example.  He did not expect others to take his place for such a worthy cause.

Remember, there is The Lord’s Wars and that of man’s wars. One is righteous and the other is not (Numbers 21:14).

A post recently popped up that will make the next point,

“Before complaining about the fact the American government is involved with another campaign to plunder another country that does not go along with the plans of the new world order.

You would not have to worry about other countries hating you if you stopped corrupt politicians from inciting America to attack their countries.

Bombing other countries, Launching coups, installing expendable puppet dictators only to send in American forces to establish a military presence.”

“In today’s distorted media landscape, when the U.S. Government calls another nation’s leader a dictator, what they really mean to say is that they’re not a complete pro-USA puppet.”

Just think of this, 94% of Americans do not believe the lying media, Congress has an 11% approval rating, and yet, when they are told what some drummed up foreign country is going to do to us, the people somehow latch onto the fact that they are now telling them the truth. This is the pinnacle of hypocrisy (Romans 1:18).

Gen. Douglas MacArthur said of the United States government back in 1957:

“Our government has kept us in a perpetual state of fear – kept us in a continuous stampede of patriotic fervor – with the cry of grave national emergency. Always there has been some terrible evil at home or some monstrous foreign power that was going to gobble us up if we did not blindly rally behind it. …”

Of course, war is never sold to you in truth.  Remember, the truth is always the first casualty of war (John 8:44).

“By way of deception, thou shalt do war.” Mossad slogan

What of the military–industrial complex (MIC), which is an informal alliance between a nation's military and the arms industry which supplies it, seen together as a vested interest which influences public policy.

A driving factor behind this relationship between the government and defense-minded corporations is that both sides benefit—one side from obtaining war weapons, and the other from being paid to supply them. The term is most often used in reference to the system behind the military of the United States, where it is most prevalent and gained popularity after its use in the farewell address of President Dwight D. Eisenhower on January 17, 1961. In 2011, the United States spent more (in absolute numbers) on its military than the next 13 nations combined.

I suggest that next time a war is being sold to the American people that those who are calling for the war, like our Forefathers, are the first ones to lead the way.

The people can always be brought to the bidding of the leaders. That is easy. All you have to do is tell them they are being attacked and denounce the pacifists for lack of patriotism and exposing the country to danger. It works the same way in any country. –Herman Goering

And Americans still haven’t figured this out.

Henry Kissinger said of our veterans:

“Military men are just dumb, stupid animals, to be used as pawns in foreign policy.”

The fact is, the American military are not dumb and stupid.   They just need to recognize who the enemies are, and that comes by knowing what the Law states (Hosea 4:6; 2 Timothy 2:15).

"I, _____, do solemnly swear (or affirm) that I will support and defend the Constitution of the United States against all enemies, foreign and domestic.”

There are only two things we should fight for. One is the defense of our homes and the other is the Bill of Rights! -General Smedley Butler

So, the next time you hear the politicians clamoring for war, if it’s a worthy cause, they should be the first ones to go.

People You Should Run into Around the Country

My pal Larry went to Detroit on business and ran into Oneita Jackson at a restaurant there and brought the word back that I needed to have her on my show, because Oneita Jackson IS Detroit. When I read that Oneita "cracks herself up," I knew she was my kinda girl.
People on six continents know who she is. She's a trip. Once known for providing the most authentic trips around Detroit, Oneita is the former editor of The Detroit Free Press and The O Street Blog, and the author of two books -- one about bad customer service and the other about assumptions people make about race. Oneita realized one day that she wanted to meet more people, so she decided to drive a cab in Detroit and provide tours of the city to help people "feel" the city. That's how Mercedes Benz heard about her and hired her to wheel around Detroit, Oneita style.
"Meeting strangers, making friends and selling books on the run" is one quote from this awesome piece on Oneita written by Heike Kaufhold for She's Mercedes. Anyone visiting Detroit needs to look up Oneita Jackson. She's stopped driving a cab so tune in to the top of this weekend's show to find out where you can find her now. She's also @OneitaJackson on Twitter.
Imagine a whole crowd of people wanting to give you money? Where do you sign up for that? With Kerry Walters, crowdfunding specialist and social media expert. Her business is CrowdtheCause.com, and it is a crowdfunding campaign consulting, management and optimization company. My head gets crowded trying to understand what Kerry knows.
Kerry has seen the progression of the crowdfunding industry grow digitally since it's inception in the late '90s when she worked in the boom of the dot com industry in Silicon Valley & San Francisco. There she helped bring the first community network of websites and chat software company, Talk City Marketing Group to a public offering.
Kerry has over 20 years in marketing, sales and business development within traditional and emerging media as well as overall business development & small business operations. Her sincere passion for startups has helped bring young companies to be in a position to be sold in under 5 years. Tune in to this week's edition of the meet Kerry.

Timepieces are important generational heirlooms, as are many pieces of jewelry passed on through generations. One of the rarest men in the rare watch world, Roberto, of Manfredi Jewels in Greenwich, Conn., says he never tires of people bringing him their grandfathers’ or fathers’ watches to fix, or help people understand their value. Speaking of generations, Manfredi Jewels offers apprenticeships to those interested in learning and carrying on the craftsmanship involved in the fine watch and jewelry business.

Speaking of traditions, Roberto says the one thing that will never go out of style is people “celebrating” milestones by giving a gift of jewelry or a fine watch. Tune in to Saturday's show as World Class Interviews with Debbie Nigro presents "The Man In The Watch World the World Watches," and learn how a 30-year business in Greenwich, Conn. became one of the leading watch stores in the world.

Visit DebbieNigro.com for more information about Debbie and the show, or listen live or on demand by clicking here.