Take a vinyl vacation every once in awhile 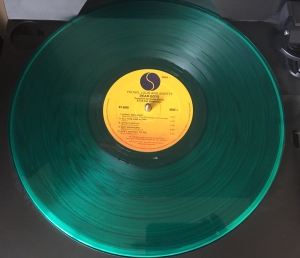 It’s hard to take a day off when your job consists of writing about exactly what you want to write about whenever that inspiration strikes. I’m usually inspired to write something daily, but sometimes a vacation can go a long way in refreshing your thoughts and disconnecting your brain from all things work. That’s why I went vinyl record shopping on Sunday.

Vinyl’s comeback is no secret. I’m 31, and while my parents had a record player and used it often when I was a kid, I didn’t get into records until more recently when I started listening to them with friends. It became a kind of ritual. After our days listening to radio at work, whether traditional or online, and mp3s from our phones during our commute, we needed some art we could touch -- something tangible.

The quality of a vinyl recording is far superior to that of an mp3 or CD, too. I don’t care what anyone says. You can’t have better quality if you don’t capture everything in the first place. A digital recording does not capture the complete sound wave, while an analog recording does. That’s why Robert Plant’s voice sounds so much better on vinyl, because nothing is lost.

What I love most about the vinyl comeback, though, is the act of purchasing music. I went out looking for a few specific things on Sunday. After hearing The Blues Brothers’ “Briefcase Full of Blues,” I wanted to focus on buying records that featured horns, so basically anything by Chicago or my favorite band in middle school, Huey Lewis and the News. I know, I’m a throwback, but Back to the Future was one of my favorite movies as a kid, and I’ve always been a sucker for horns.

Did I find what I sought? Not really. Did I care? No. And I still ended up buying four records on Sunday.

Starting at Know Name Records in Bloomington, I discovered a bunch of records I’ll eventually buy, but the one I decided I had to have that very moment was Buddy Holly’s “Gold.” The sleeve was in terrible shape, but the vinyl looked great, so for $8 I took it home. I figured it would be one I’d never sell anyways, so what do I care what the sleeve looks like. If it plays it’s worth eight bucks. What motivated the purchase? I had just seen a Buddy Holly impersonator in Las Vegas with my dad and realized how great that man was despite not giving him a lot of play throughout my life. Now I can replay that show in my living room whenever I want.

Since I didn’t find what I sought, I went to Roadrunner Records in Minneapolis, where I immediately found the soundtrack to The Blues Brothers movie for another $8. No Huey Lewis and the News in the building, but at least I found some horns.

I walked into Extreme Noise in Minneapolis without knowing what to expect. The staff was incredibly helpful right from the start, so instead of walking in and looking around, I was immediately asked if there was something specific I was seeking.

“Yeah. Huey Lewis and the News’s ‘Sports,’” I said. The staff member smiled.

“Yeah, I don’t think we’ll have that one. Maybe Roadrunner Records would. You should probably be able to find it for two bucks anywhere.”

“I just came from there. What do you guys specialize in?”

“We have punk and metal mostly. We probably have who you’ve got on your shirt.” I was wearing The Menzingers’ concert t-shirt I bought when I saw them in Seattle. More importantly, though, I had stumbled upon music-buying bliss. I could spend an entire day in this store and not find everything I want to buy. In fact, everyone in the store, even shoppers, helped search for the sleeve for The Screeching Weasel’s new album “How to Make Enemies and Irritate People.” It was a fantastic shopping experience.

I also took home the album that probably made me a punk the moment I heard it -- Dead Boys’ “Young Loud and Snotty.” I might never listen to it in any other format again because the record sounds absolutely fantastic. It’s as close to seeing a Dead Boys’ show as I’ll ever get. Upon hearing the first side of the record, I posted this on Facebook with a picture of the record: "Strangely, the best I've felt listening to music."

It was one of the most pleasurable Sundays I’ve had in some time, and the Minnesota Twins lost that day. It will probably become a bi-weekly adventure. I’ll get my paycheck and head down to the record stores, grabbing long lost classics and new punk records that will gain value over time. Because what’s the point in buying art if it’s not worth anything more than a listen once in awhile?

Editor’s Note: I will publish a review of some of the most underappreciated records of all time as a follow-up to this piece.