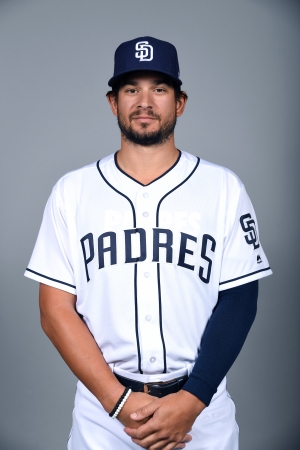 I’ve mentioned Brad Hand as a trade target for the Minnesota Twins in two previous blogs, and now that we know the Twins’ surprising performance has Thad Levine targeting trades for long-term assets prior to the July 31 trade deadline, it seems Brad Hand is the Twins’ perfect trade target. Here are the reasons:

This was originally published at FoulPlaybyPlay.com, a community of foul-mouthed, sports broadcasters providing uncensored, commercial-free play-by-play and color commentary during select games.

Tyler Duffey and Taylor Rogers have worked out nicely in high-leverage situations, and the Twins have struck gold with closer Brandon Kintzler. But Kintzler’s a free agent at the end of the season, and is likely trade bait. Glen Perkins has a team option for 2018 that won’t be picked up, and while the Twins expect to get Trevor May back next year, they have no idea what to expect from him after Tommy John surgery (his recovery from which he’s documenting at MLBTradeRumors.com).

Hand has the stuff to close, and the Twins could trade Kintzler and transition to Hand without damaging their chances to contend this season. Depending on who they give up, they could actually improve their chances. Plus, Perkins won’t have to pitch in high-leverage situations upon his return.

Hand won’t be a free agent until 2020, and while he’ll make more in arbitration next year than the $1.375 million he’s making this year, he’s still a steal given his .984 WHIP this season.

Glen Perkins will make $6.5 million this year. Hand will be lucky to make half that next season. The Twins' budget of $108 million is one of the highest in Minnesota's history, too.

Hand won’t cost the Twins a ton of prospects, either. While he’s one of the top relievers on the trading block, he’s not a closer and won’t command a return like Aroldis Chapman or Andrew Miller did. The trade market is also deep with relievers, so the Twins could probably part with a pair of prospects that are a few years away from contributing at the major league level.

The Twins have what the Padres need

We all know the Padres have a giant hole at shortstop, but the Twins shouldn’t move Nick Gordon to get Hand. They don’t have to, either, as the Padres are fielding two outfielders 22 or under -- Manuel Margot and Allen Cordoba. I don’t know if that means the Padres would be interested in Eddie Rosario or Eduardo Escobar, but if they are, that might be a deal the Twins could make with Zach Granite knocking down the door to the majors with his bat.

The Padres need help at the lower levels of the minors, too. Shortstop Javier Guerra (22) has struggled at high-A this season and last, as has outfielder Taylor Kohlwey (22) this year. And Peter Van Gansen (23) might not make it out of high-A, so there are some holes in San Diego’s lower affiliates that could be filled by Twins talent like Jermaine Palacios or Max Murphy. My guess is the Padres feel they’re probably three or more years away from contending, so a couple of 20-year-old prospects with high upside might be a perfect fit.

Twins fans might not like the idea of letting go of a young player with promise, but that’s what you have to give up to get someone who’s good right now and will be good for quite some time.