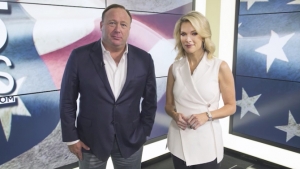 Hello friends! Today we gaze into the future and condemn and / or condone an interview that none of us has even seen (or heard). Everyone else is doing it. We might as well too! I promise I will try not to eye roll too hard at all the future gazing. (I failed to do that. I eye roll, a lot).

So what’s the deal? Who’s involved?

Alex Jones is a controversial figure to say the least. Plenty has been written about him. He hated the Clintons and so lefty’s hated him. Then he hated Bush Jr. and suddenly lefty’s thought he was an okay dude. Then he really hated Obama and lefty’s hated him (again). Then he supported Trump and lefty’s really, really hated him. His daily radio program draws millions of listeners. His YouTube videos draw hundreds of thousands of viewers. His controversies are explosive. His daily life is over reported. He’s loved. He’s hated.

Megyn Kelly is a broadcast journalist. At first she worked for Fox and righties thought she was an okay lass. But then she dared to question then president elect Donald Trump’s sexist comments and righties started to hate her just a little bit. Then she claimed that (former) Fox chairman Roger Ailes sexually harassed her and righties hated her even more. Then she quit Fox news and joined NBC news and righties knew that she was the devil incarnate and en mass claimed, “We never liked her in the first place!”

So is set the interview of the ages. Megyn Kelly interviews Alex Jones. Sunday night, June 18th. Which -- is fine. Right? But I mean, who cares? Known broadcast journalist interviews known public figure, is not news. And it shouldn’t be news -- until the interview is actually broadcast!

I mean, why are all the major publishers (and many of the minor ones) airing piece after piece accusing one side (or the other) about, I don’t know, dumb things -- for an interview that won’t air until Sunday?

That seems a little absurd.

No, but Alex Jones is claiming Megyn Kelly is going to edit the footage. Also, he claims she’s a liar.

Editing happens. Like, all the time. In every article or news story you’ve ever read or watched. Ever. (Except  maybe for this one which goes on forever!).

Well, not everyone can be lying all the time. You know?  Some of them must be telling the truth at least some of the time but that’s the problem these days. It doesn’t seem to matter any longer. Liberals only believe liberals and conservatives only believe conservatives. While libertarians, at least, think both sides are lying (and there’s something to be said about consistency).

No, you don’t understand. Alex Jones is pure as the white snow. And Megyn Kelly’s “fake news” edits make him look bad. So -- that obviously means -- she’s evil!

Okay. I can write a single answer for all current questions / comments that sound anything like this:

Here is my answer to all of you:

Maybe. I don’t know. I haven’t seen the interview. Neither have you.

Alex Jones did indeed release a mashup (read, “edited”) version of the pre-interview phone call between Megyn Kelly and Alex Jones. Note the delicious irony that is about to occur!  Mr. Jones is posting piece after piece, claiming Megyn Kelly is editing the NBC four hour interview -- to make him look bad. In essence, to show what a douchebag Megyn Kelly is (for, you know, editing the NBC interview to make him look bad!) Mr. Jones, in a pre-emptive strike, takes the pre-interview phone call with Kelly and -- (wait for it) -- edits it to make her look bad!

No, but seriously, Megyn Kelly is a liar! She told him in the pre-interview that the actual interview wasn’t going to be a hit piece and all the promos now make it look like a hit piece!  She’s fake news!!!!!

Wait! What? What’s that you say! You have proof that a reporter -- manipulated someone in order to get them to speak on the record? I’m shocked! What new form of devilry is this? Call the FBI! This must be illegal! Right?

Except, that, no. Not so much. It might be that Kelly manipulates Alex Jones in the pre-interview, of course, we don’t know exactly if that statement is true since -- none of us have seen the NBC interview, yet. In fact, if you are just now, today, learning that reporters lure people into a false sense of security -- in order to get them on the record to expose their lies / hypocrisy / crimes -- then you, my friend, are sadly naïve.

And “fake news” does not mean, “I don’t like the sound of that news -- it must be fake!” Fake news is when a reporter manufactures or manipulates events to create a story that they know to be false or grossly misleading.

For example, Stephen Glass, a late 90’s writer for the New Republic, wrote several fake articles including, "Spring Breakdown", a lurid tale of drinking and debauchery at the 1997 Conservative Political Action Conference.

“Spring Breakdown” was a hilarious article about dumb Republican kids doing really dumb things. The problem, as you’ve no doubt surmised, is that the entire story was fabricated in Stephen’s word processor.

“In 1998, it was revealed that many of his (Stephen Glass’s) published articles were fabrications. Over a three-year period as a young rising star at The New Republic, Glass invented quotations, sources, and events in articles he wrote for that magazine and others. Most of Glass's articles were of the entertaining and humorous type; some were based entirely on fictional events. Several seemed to endorse negative stereotypes about ethnic and political groups.”

That, ladies and gentlemen -- is fake news! The horribly titled movie, Shattered Glass, is a fantastic dramatization of the events leading to the downfall of Stephen Glass. And if you Google the movie and say, “But Hayden Christensen is in it and he’s one of the worst actors to appear in the Star Wars prequels -- there’s no way in hell I’ll be able to watch it now!” I agree with you. Hayden is a terrible actor in every movie I’ve ever seen him in -- except Shattered Glass. And he’s so good in Shattered Glass (as Stephen Glass) that you’ll wonder, “He’s great! Why the F is he so bad in every other movie?”

Well, I have snotty theories about that but that’s another article entirely. And clearly, I digress.

Can you get back to the Jones / Kelly duel?

Sure. But I don’t really have much more to say. Alex Jones can claim all he wants that Kelly is going to hit piece him. We don’t know if it’s true -- because none of us have seen the interview!

Alex Jones can claim all he wants that he has the full four hour interview on tape and he’s going to broadcast it before NBC’s hit piece. Well, that’s fine. Go ahead. But we still don’t know what Kelly’s interview was going to be like. Because none of us have seen it!

But we all know the lame-stream media lies, so that means that Alex Jones is telling the truth about everything!

No we don’t. There are not two equal sides to every argument. Stop claiming that all news you don’t like is fake. Seriously, you sound silly. Megyn Kelly and NBC are going to edit the interview. In the same way that Alex Jones edits his interviews.

As for Kelly being more manipulative than Jones, or Jones being more of a liar than Kelly, or Kelly doing this, or Alex Jones doing that. Well, I don’t know! Maybe. I haven’t seen the interview.

That’s an enormous amount of information! So, again, I guarantee you, you can find Alex Jones saying reasonable things (especially during all those years he hated George Bush, Jr.).

As for this Kelly / Jones feud. I don’t know, man. I haven’t even seen the interview. I would write all about it if I had but I seemed to have misplaced my T.A.R.D.I.S..

I can only hope that the actual interview which airs on NBC on Sunday, June 18th is as exciting as the coverage in the last few days of what it might be about!